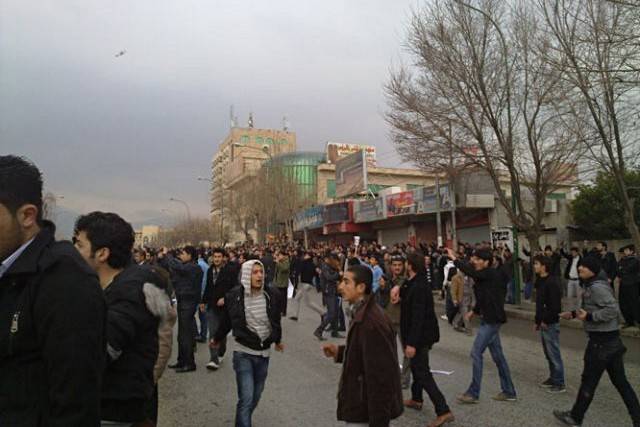 There have been reports that an uprising has started in Sulaymaniyah, the capital of the Kurdish region in northern Iraq. Reports indicate that the security forces have used brute force to suppress the protests and nine or ten people have been shot and killed. We know that street protests have taken place on two consecutive days (16th and 17th February).

It is evident that the revolution is spreading at extraordinary speed across the whole of the Middle East. After the events in Tunisia and Egypt, many other countries in the Arab world have been infected with revolution. It appears south Kurdistan (northern Iraq) is one of the latest to erupt.

On Wednesday (16th February) there was a spontaneous protest in Bardarky Sara, the central square in Sulaymaniyah. The trigger was, apparently, an unemployed young man attempting to set himself on fire, trying to imitate the young unemployed youth in Tunisia who set the whole region ablaze two months ago. Once they heard the news people started gathering in the square, trying to make out what was happening. Eyewitnesses claimed that the young man who tried to set fire to himself was thrown into a police car and taken away by the security forces.

As the news spread more and more people gathered in the square until the crowd numbered between four and six thousand. Spontaneously, chants began to ring out from the crowd such as; “Electricity, Electricity”, “Water, Water”, “Work, Work”, “Destroy that building, it belongs to the rulers” and “This is Tahrir Square, Do you remember Mubarak?” These and other slogans demonstrated how the rotten regime of the Kurdish Regional Government of Barzani and Talabani has not provided for the basic needs of the people, and also how the people are no longer prepared to accept the miserable conditions any longer.

The first day of the protests took everyone by surprise including the authorities. According to those who were on the demonstration, a vehicle carrying around a dozen riot police turned up at one corner of the square, but when the crowd turned on them and started jeering, they turned tail and disappeared. As darkness fell and rain began to fall, the crowds melted away.

The next day they where back out on the streets. This time there were a lot more and among them were women, children and the elderly. But unlike the day before, the authorities were prepared. They asked the protestors to return to their homes peacefully, to which the protestors began chanting “We are not going, we are not going”. The crowd then marched towards the Headquarters of the Ruling KDP (Kurdish Democratic Party). At this point bystanders began joining the procession.

When the crowd reached the building they started shouting slogans among which “Leave that chair, the Masses are hungry” was particularly striking as it demonstrated the class nature of this uprising. The gathering began throwing stones at the building. At that point the security forces and KDP guards opened fire on the crowd with automatic weapons. Eyewitness reports say that 10 people have been killed and 35 injured.

The use of force did not disperse the protest. The protestors engaged in street battles with the security forces. From images we have seen and from the reports from those who participated in the events, clashes continued all day. We do not know what the situation is today as there is very little information coming out from the region. The movement is combined with a protests with very similar demands in Iraq, where thousands have been demonstrating in the last few days, from Fallujah to Kirkuk and Sadr City, asking for electricity, protesting against corruption, etc. In Kout, a 16 year old protestor was shot dead by the police. 4 people had already been killed on February 3 in Diwaniya.

It seems that the youth who tried to set himself on fire was an Arab, and that protests in Sulaymaniya involved Kurds, Arabs and Turkmen, which would indicate that these protests are cutting across the national and religious divides and uniting the workers and youth on class basis around social, economic and political demands.

One thing has become abundantly clear; the revolution is spreading. The flames of revolt have now set alight Iraq and Kurdistan. The International Marxist Tendency welcomes the emerging struggles and would like to express its support for the peoples of the Middle East. Tunisia and Egypt have shown what is possible; the people united in struggle can defeat those who wish to exploit and oppress. We will follow events and try to report on them as they unfold. We call on the international labour movement to mobilise in solidarity with the revolutionary people of the Middle East.

Bardarky Sara: Start of a Revoution in Iraqi Kurdistan?