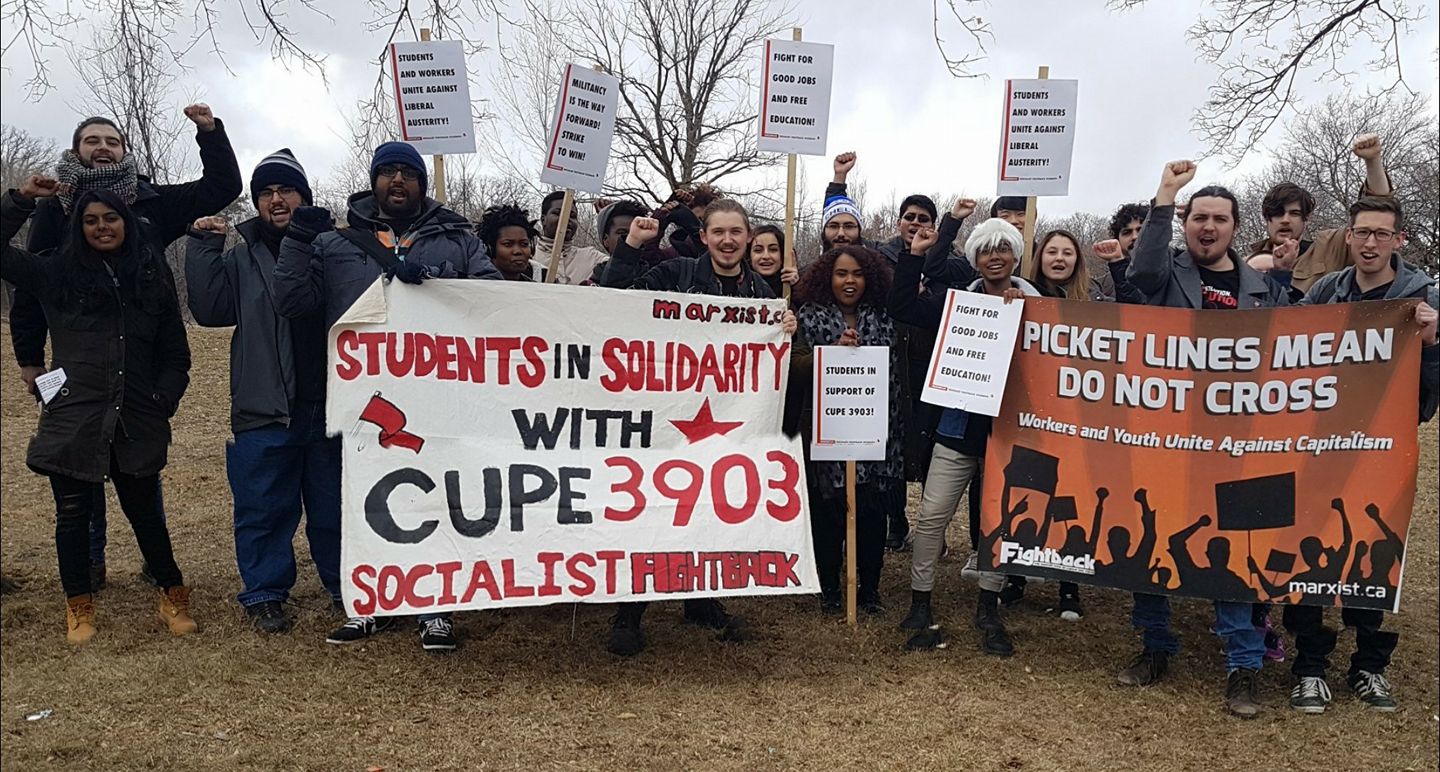 On 28 March, a decision was made at a Special General Members Meeting of CUPE 3903 (TAs and sessional lecturers at York University) to ban Fightback from picket lines and all spaces associated with CUPE 3903. We are shocked by this decision which was based on misinformation and innuendo. We publish here, Fightback's response to this decision.

As CUPE 3903 is still on strike and is faced with a forced ratification vote, we want to reiterate that we unequivocally support the striking workers. Our comrades who are members of CUPE 3903 will be voting against the forced rat, and we call on all members of the union to do likewise.

A lengthier article on the sectarian witchhunt against us that has been whipped up at York university has been published here.

Fightback's reponse to the ban:

We are shocked by the decision that was made at the Special General Members Meeting to ban Fightback from picket lines and all spaces associated with CUPE 3903. This decision was made on the basis of unnamed and unsubstantiated allegations. No concrete allegations, no names of parties concerned, no details whatsoever, have yet been communicated.

In the letter sent to us by CUPE 3903 Chairperson, Devin Lefebvre, we were notified that we have failed “to take the proper steps to take collective accountability.” This is a false accusation. As soon as we heard rumours, we repeatedly asked for details, names, and evidence. We have repeatedly offered a process to ensure accountability - at the senate occupation and directly to CUPE 3903 - and this request has been denied. As you are well-aware, Fightback already offered CUPE 3903 full cooperation in a union-run procedure to investigate allegations and ensure accountability, which we proposed on 26 March, 2018. The approach of this CUPE 3903 motion is completely in contradiction with pursuing accountability.

The letter states that there have been “repeated incidents of violent and abusive confrontations initiated by Socialist Fightback that have taken place during the strike”, yet no concrete details or incidents of abuse have been communicated to Fightback. Our activists, both students and campus workers, have been at the forefront of picket lines solidarity during this strike (as well as during the 2015 and 2008 strikes). We have organized dozens of visits to picket lines and rallies during the weeks since the beginning of this strike. Nobody from the union has raised a complaint about an incident of violence or abuse during all these picket visits and rallies. Instead what has been communicated is enthusiasm at our support, us being asked to return, our activities being encouraged, our political ideas, newspapers, slogans, placards and banners being well-received, and us often being asked to stay on the picket lines to bolster their strength, especially when numbers have been limited.

While simultaneously being accused of sexual violence, no abuser or harasser has been named. The aforementioned email from Devin goes on to state that “this motion does not prevent individuals, especially those who are also members of CUPE 3903, from attending our picket lines and union spaces.” So what we are told is that we have abusers in our ranks, but they are free to participate in CUPE 3903 strike activities and spaces “as individuals”? How are we supposed to make any sense of this? Why ban open political activity by Fightback as a whole? Why is the identity of the alleged abuser(s) being kept secret?

The result of this motion is not to protect the movement from potential abusers, as their abuses are being kept anonymous and they would still be able to participate as “individuals”. The only concrete result of the motion is therefore to restrict activists from promoting Fightback literature, carrying banners, holding placards, speaking on behalf of Fightback, organizing as Fightback or identifying as Fightback. The motion is clearly an attack on the democratic rights of marxists and revolutionaries. Your motion is simply a ban on Fightback and the political programme and methods of struggle of the marxist movement that it represents. Your motion has nothing to do with keeping the movement safe of abusers or holding abusers accountable, as it protects abusers and allows them to continue operating in the movement with impunity.

We find it scandalous that we were not even allowed the basic democratic right to speak to these allegations at your meeting. It is a basic democratic right to have a fair hearing. It is completely against the traditions of the trade union movement and of trade union democracy to deny due process. This is the case even from a legal point of view. It is our right to know what the concrete allegations are. It is also unacceptable that the motion banning Fightback was not sent to all members of CUPE 3903 in advance.

We are shocked and scandalized by these actions. We demand a meeting with the union executive to put forward our case. Even in bourgeois law, the accused have the right to defend themselves, and for concrete allegations, details and evidence to be presented.

This motion and the entire procedure to reach it is a disgrace to the traditions and democracy in the labour movement. The result has been to harm the strike movement and the student solidarity movement. At a crucial point in the struggle, this has served to damage the movement significantly. The executive leadership of CUPE 3903 is responsible for these scandalous actions that have harmed the struggle. Instead of pursuing accountability, achieving safety in the movement and trying to strengthen the struggle, you have decided to carry out a political censorship campaign and witch-hunt against the marxists who have been consistent supporters of CUPE 3903 and the strike movement. These bureaucratic and stalinist methods have no place in the labour and student movement.

The following resolution was presented to a strike committee meeting on 26 March. This was ruled out of order and the members were not allowed to vote on it. This resolution was completely hidden from the Special General Members Meeting, which voted for the political ban on Fightback.

At the Special General Membership Meeting held on Wednesday 28 March, a motion from the floor was passed calling for the immediate ban of Socialist Fightback from CUPE 3903's picket lines and spaces. This is due to the pattern of sexual violence, and most shockingly, harassment of survivors' attempts to speak up, that your organization has displayed in the recent past. Our members do not feel comfortable with your organization, as you continue to fail to take the proper steps to take collective accountability for the group's actions. This motion does not prevent individuals, especially those who are also members of CUPE 3903, from attending our picket lines and union spaces.

Our members recounted the behaviour they had witnessed at the undergrad-led occupation and at the Strike Committee meeting earlier this week. The motion passed unanimously. We strongly encourage you to think long and hard about how to build accountability into your organization.