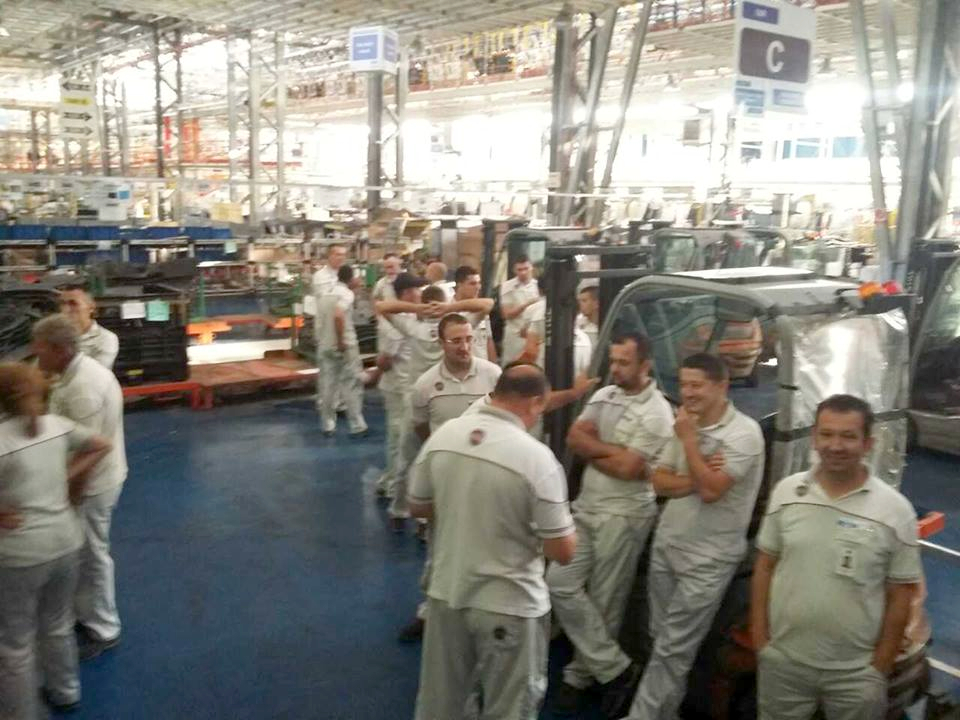 The Kragujevac FIAT-Chrysler's strike in Serbia continues, having entered its seventh day. Of the more than 2,400 workers, at least two thousand have downed tools since June 26th. Only 250 "white collar" workers have decided for now not to take part in the strike.

The FCA group is the main exporter in Serbia and the old Zastava plant in Kragujevac produces the 500L model.

Workers are demanding wage increases (from 38,000 to 45,000 dinars, about £320), the payment of overtime and an end to sackings. The latter are at the discretion of the company and the remaining workforce is, of course, forced to take on the work of those who have been dismissed. Last summer a whole shift was laid off and not replaced. There are also no provisions for maternity leave or long term illness.

[In the VIDEO: June 26, workers stop work and come out on strike]

In addition to reorganizing the workload, through new recruitment, the Samostalni Sindikat (Confederation of Independent Trade Unions, which organizes the majority of workers in the plant) is demanding the payment of the agreed production bonus for 2016 and an increase of the same for 2017.

Despite the pressures of management, the strike is compact and will continue "as long as our demands are not met", says Jugoslav Ristic chair of the Samostalni Sindikat.

Ristic explains how the strike at Magneti-Marelli, a factory that supplies parts to the FIAT-Chrysler plant, had been a source of inspiration for the FIAT-Chrysler workers. A few months ago, the Magneti-Marelli workers came out on strike to win wages equal to those of the Fiat workers, at that time around £260 net. The company tried to break the strike by sending office workers to work on the production lines, but the move failed and after five days of total blockade the company had to yield to the demands of the workers.

It is interesting to note how the strike was organized after a renewal of the workers' elected representatives. Magneti Marelli's new Chair of the Trade Union, Aleksandar Korać, describes the existing working conditions at the factory: "One has to work in inhuman conditions, forty degrees in the shade without air conditioning. People are forced to stay at home for a long time sick. You break your back for the company's profits."

FCA set up a plant in Serbia to maximize profits, paying starvation pay and minimizing any investment in infrastructure. This was backed by the government in Belgrade, with the state still a 33% shareholder in the Kragujevac factory. Both the Democratic Party and (more recently) the SNS, have granted all kinds of concessions to Marchionne [the Fiat-Chrysler CEO].

Today, Serbian workers have begun to say no to Marchionne's arrogance and as Ristic said, "We are convinced that we must not retreat on this."

Solidarity with the struggle of Kragujevac workers must be total. The solidarity message of a group of shop steward and FCA workers in Italy is an important signal.

The Kragujevac strike can be an example not only for the rest of the Serbian working class, but for the workers of the FCA group in Italy and internationally.

(Some of the information in this article was sourced from http://www.masina.rs/).

From Italian workers: To the workers in struggle at FCA Kragujevac (Serbia)

We publish here a solidarity message addressed to the Serbian workers from Italian workers, shop stewards and rank and file workers from various FCA plants around Italy.

We express our solidarity with your struggle. The reasons for your strike are indisputable: back-breaking shifts, wages that do not allow a decent living, bad working conditions that become unbearable with summer heat. They are the same abuses we suffer every day as FCA workers in Italy.

FCA, in Serbia, in Italy and internationally wants to make profits on the skin and bones of the workers.

Your struggle is a source of inspiration and an example. It shows that we can and we must say no to Marchionne! [FCA CEO]

(More signatures are being collected)