Share
Tweet
They came from the depths of Venezuela, from Apure, Zulia, Barinas and other states of the country, marching to Caracas, thousands of peasants in the defence of the revolution, for the agrarian revolution and for the 10 million votes for President Chavez.

They came from the depths of Venezuela, from Apure, Zulia, Barinas and other states of the country, marching to Caracas, thousands of peasants in the defence of the revolution, for the agrarian revolution and for the 10 million votes for President Chavez.

In an enthusiastic mood, with thousands of banners and flags, the march departed from El Valle to the corner of Santa Capilla, on the Urdaneta Avenue, in Caracas. The march was led by the comrades of the FNCEZ, the National Peasant Front Ezequiel Zamora, along with the UPV, the Popular Union of Venezuela, of Lina Ron, which supported the march with many of its members. 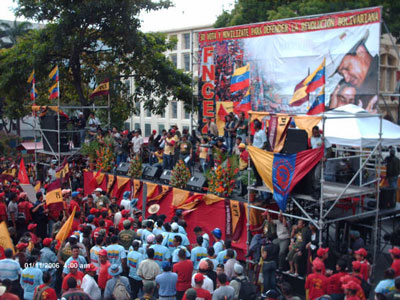 The peasants marched in support of the re-election of the President of the Republic. One cannot speak of revolution when the basic tasks, such as the elimination of the large estates of the landlords, are still to be carried out. This task cannot be postponed if we want to complete the revolution and take it to socialism, as Chavez has urged. The struggle of the Venezuelan peasantry for the land, faces the ferocious resistance of the landlords who through repression and violence are trying to put a stop to the people's thirst for land. More than 160 peasants have been killed in the last few years by hired assassins.

The peasants are one of the most militant sectors of the masses in Venezuela and this march, full of energy, was a demonstration of this. The platform that was raised on the Avenida Urdaneta was full of various journalists reporting on the march, which took place just a few days before the presidential elections. The peasants are conscious of the fact that the re-election of Chavez is vital for the revolution and vital for the continuation of the struggle for the land and for socialism in Venezuela.

At one o'clock in the afternoon the head of the march arrived at the platform. After singing the national anthem thousand of people began to sing and chant in unison - "The Oligarchs tremble, Long Live liberty!"

The first speaker on the platform was Alan Woods who was received with the cry, "Revolutionary Greetings!". Alan offered the crowd the international greetings of the International Marxist Tendency and the international Hands off Venezuela Campaign. After asking who it was that had defeated the coup and the bosses' lockout the peasants chanted in unison, "The people, the people!" 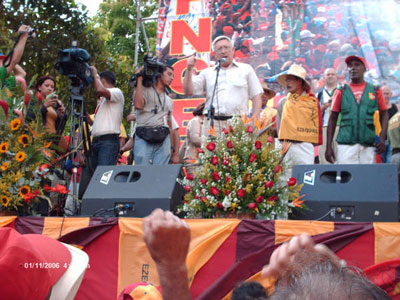 friend of his, but he asked whether one man could make the revolution, and thousands of people in the crowd answered "NO!". Alan then asked, "Who makes a revolution". The peasants answered, "The people, the people!" Alan declared that the battle on December 3 must be won and that the revolution could not stop at that, that it was necessary to complete the revolution. Alan finished his speech with this idea amongst the applause of thousands of peasants who received his ideas with enthusiasm, chanting in unison, "Marxism-Leninism!"

After leaving the platform Alan was interviewed by the media covering the peasant march.

Without doubt this march is an important landmark for the revolutionary movement in the struggle for the re-election of President Chavez on December 3. The reception of the intervention of Alan Woods, and the receptiveness to the ideas of Marxism in the Bolivarian revolution, demonstrate the high level of consciousness of the peasants who are in the vanguard of the revolution in alliance with the working class.

You can see a photo gallery of the march and Alan Woods' intervention here.