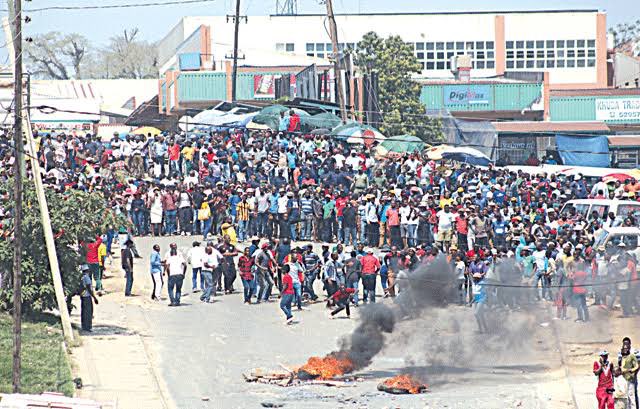 The popular uprising that erupted in June has changed the situation in the Southern African country of eSwatini. Banks are still closed, the media is being heavily censored, foreign media is banned, access to the internet is being tightly controlled, and the security forces are clamping down on innocent and unarmed civilians.

Ever since the June insurrection, the corrupt and degenerate monarch Mswati III has largely stayed out of the public eye. It was claimed by the Communist Party and other opposition groups that he fled the country in late June, though the Prime Minister denied this. In any case, since then, he has been operating in the shadows, while his corrupt henchmen has been doing all the dirty work. According to the newly formed civil society organisation, eSwatini Lives Matter, over 42 people and counting have been killed by the state. Amnesty International put the figures at more than 70. The numbers are hard to quantify because the state is not giving any records.

The state has launched a ruthless crackdown in response to the protests, with dozens killed and many others tortured, detained or abducted. Since the start of the protests, eSwatini authorities have worked with South African telecommunications companies like MTN to impose a blackout on communication and internet to curtail the sharing of information online. A lot of EmaSwati have fled from the tiny landlocked kingdom and have found refuge in nearby South African villages in the Mpumalanga province.

However, the repressive measures of the state have so far failed to put the genie back in the bottle. Protesters took to the streets in huge numbers in Manzini, the second-largest city, on Friday. The Swaziland National Association of Teachers secretary general, Sikelela Dlamini reported that police fired tear gas and used water cannon to disperse protesters in Manzini. Two people were injured, while 15 were detained and later released.

Protests are still raging across the country despite the heavy response from the state. The killing, arbitrary arrest and detention of unarmed civilians have not made the protests go away. If anything, they seem to be emboldening resistance and creating conditions for the situation to intensify. The Emaswati masses have lost their fear of the regime. This is a very dangerous situation from the standpoint of the ruling class.

Police are shooting at citizens of #eSwatini who are on a peaceful march in Manzini calling for political reforms. #EswatiniProtests pic.twitter.com/12Ds0F3Sjo

The killing of Thabani Nkomonye, a law student at the University of Swaziland, by the police in May triggered an already volatile situation into sustained protest action. Later, deadly protests erupted after a decree by King Mswati III on 24 June banning citizens from sending petitions to parliamentarians to demand democratic reforms. The ban fuelled protests in the country’s two largest cities of Manzini and Mbabane, with demonstrators calling for the king to step down and allow for a transition to a more democratic regime. Buildings connected to King Mswati III were reportedly torched by protesters.

The anger of the protests has been fueled by the deteriorating economic situation and the COVID-19 restrictions as well as by continued land grabs by members of the royal family. Ultimately, this is the major reason for the continued protests in the countryside. For the royal family, this is very bad news, because it means that they have alienated a big chunk of their traditional social base.

On Friday 16 July, the king summoned a ‘sibaya’ (a sort of convention or ‘national dialogue’) to ‘discuss’ the situation in the country. But this convention, which was attended by royalist followers of the regime, turned out to be a farce and immediately showed the weakened nature of the monarchy. Large numbers of government trucks, which were supposed to ferry people to the royal palace, arrived empty as a result of a boycott called by the EFF Swaziland and the Communist Party.

On the same day, a huge demonstration was held in Manzini in response to this move by the king. Seeing the demonstration as a threat to the sibaya itself, the state decided to break it up with brute force. According to the Swaziland National Association of Teachers (SNAT) Secretary General Sikelela Dlamini, police fired tear gas and used water cannon to disperse protesters in the city. Meanwhile, the sibaya was cut short and ended up carrying a speech in which the King appointed a new prime minister.

The masses saw straight through the farce of a ‘national dialogue’. At the end of this fiasco, the status quo remains. The eSwatini government and the Prime Minister are appointed by the King. The King chooses the prime minister and his cabinet, and has the power to nominate almost one-third of the members of parliament. He appoints the director of public prosecutions, is commander-in-chief of the military and police, and is immune from being charged and paying taxes. Two-thirds of lawmakers must approve a change to the constitution, which the King then has the power to reject. If the amendments have to do with clauses on his pay, or him being immune from paying taxes or prosecution, 75 percent approval is needed. If it meets that threshold, the amendment must go to a referendum before going to the King for ascent. This means that the King is an utterly unaccountable, absolute monarch, and uses his power to advance his interests.

In our previous article, we explained the role of the House of Assembly and its Tinkhundla (Constituencies) as nothing but an advisory body to the King, which can be overruled and disbanded anytime. The minister behind the state terror is the Minister of ICT, Princess Sikhanyiso, who happens to be one of the many children of the monarch, who join him in plundering the kingdom. She shut the internet down upon receiving instruction from ‘His Royal Highness’ and his sock puppet, Prime Minister Themba Masuku. MTN was complicit primarily because Mswati III owns 25 percent of the MTN subsidiary in eSwatini.

A crisis of the regime

The political unrest in Eswatini, the last absolute monarchy in Africa, has brought to the fore an enduring and deep economic and social crisis in the country. The undemocratic nature of the regime is part of the immediate causes of the current crisis. But ultimately it reflects the general crisis of the capitalist system in Southern Africa. The regime in eSwatini is tied hand and foot to the ruling class in South Africa. The bourgeoisie in South Africa accumulates profits from the exploited working class and peasantry in eSwatini. It also controls the Southern Africa Customs Union, a key revenue source for Eswatini,

The last major workers’ strike in 2019 exposed the highly exploitative economy of eSwatini, where a teacher earns a mere 2000 rands (this is below the South African minimum wage, which is 3500 rands). Factory workers earn less, and peasant farmers barely make enough to feed themselves. That is why 90 percent of the imports in eSwatini come from South Africa and they export over 64 percent of their products to the South African consumer and services market. The eSwatini economy is highly dependent on South African capital to keep it going, which is why South Africa has not intervened against the King, because of shared interests.

Also, the last thing the South African ruling class needs, especially with hunger and frustration fuelling massive riots by the poor, is to see a ruling clique overthrown just over the border. This might serve as an inspiration to, or infect the South African workers and poor with insurrectionary ideas.

eSwatini’s destiny is tied with South Africa and therefore only an internationalist solution can resolve the contradictions of the eSwatini state. The South African working class has a significant role to play. The demands of the protests were initially for a multi-party democracy, a constitutional monarch, the right to vote and form a government, and ultimately elect a Prime Minister. However, the demands have become more advanced. The Communist Party of eSwatini and EFF Swaziland are calling for a fully-fledged republic. In addition to this, the slogan at Friday’s protest was: “We are fighting for democracy, freedom, jobs and for food.” The masses are now backing this slogan, showing their radicalisation.

The South African working class must stand up in solidarity and join hands with their comrades. The EFF’s provincial leadership in Mpumalanga have also convened a march to the border of eSwatini in solidarity with the oppressed masses in eSwatini. The EFF and COSATU affiliated union, NEHAWU, have been picketing at every border since the beginning of July with the intention of putting pressure on the eSwatini government to accept the demands of the people. These actions must be broadened and deepened.

The people of eSwatini must rely on their own strength and fight for their liberation independently of bourgeois liberals. This so-called ‘democratic’ opposition and civil rights groups have called for assistance from the Southern African Development Community African Union: a bourgeois body consisting of delegates from Botswana, Zimbabwe, and Zambia to ‘mediate’ in the crisis. Even if these efforts would lead to democratic reforms, such action would only serve to take power away from the working class and hand it over to the new regime of bourgeois liberals.

The working class must also link this protest with the tumultuous situation in South Africa and provide a class-based programme to this crisis. This programme must break through borders and link the oppressed and toiling masses of all lands. We must establish Action Committees, and Cross-Border Alliances and Committees to facilitate the highest possible level of coordination.

Self-Defence Units, Community Defence Units, and Village Defence Units must be established to protect the masses against the violence of the state from both sides of the border. We must qualitatively transform the current wave of riots and protests in South Africa into anti-capitalist protests, while continuing with an intensified rolling mass action programme in eSwatini. Factory Committees, School Committees, Neighbourhood Committees, and Village Committees must be set up everywhere to ensure that the masses are organised. Finally, the working class in eSwatini must mobilise for a general strike to finish off the regime.

This would be a stepping-stone to the democratic workers’ and peasants’ councils, which will emerge as the bulwark of the people against the liberal bourgeois and nationalist elements. This is also a stepping-stone to a genuine worker-led democracy, which will not stop at expropriating political power but move to expropriating the commanding heights of the economy, including land of the big bourgeois and the monarchy. The commanding heights must be owned in common and will be placed under democratic workers’ control and management. It is only a socialist revolution in South Africa and eSwatini that can deal with the contradictions of both countries, given that it is led by a vanguard and cadreship that is ready to take on the ruling classes.

Even if the monarchy is abolished, the people of eSwatini will continue to suffer. The removal of the monarch is not sufficient to solve the burning social and economic problems facing the Emaswati masses. While the call for the removal of Mswati can go a long way to rallying a large layer of the population, any meaningful, long-term solutions to economic and political problems can only come from a socialist movement with a clear political programme. Any political democratic reforms that do not include a democratic takeover of the eSwatini economy and wealth will simply transfer power to a new elite of the capitalist class eager to fill the void. We shall continue to see the exploitation of the many for the benefit of the few as long as capitalism exists.