Details
In Defence of Marxism
26 November 2020 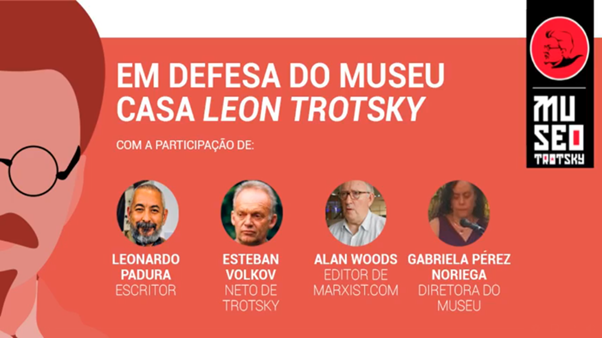 Thousands tuned in for an online rally on 25 November to launch a Brazilian campaign in support of the Leon Trotsky House Museum in Mexico. The meeting was hosted and introduced by Roberto Robaina a PSOL (Party of Socialism and Freedom) councillor in Porto Alegre and leader of the MES tendency within the party, Serge Goulart (from the Esquerda Marxista, Brazilian section of the IMT) and Israel Dutra, the PSOL International Relations Officer. Speaking at the meeting were Esteban Volkov, Trotsky’s grandson, Gabriela Noriega, the Museum’s Director, Leonardo Padura, the renowned Cuban writer who wrote “The Man Who Loved Dogs”, and Alan Woods, editor of “In Defence of Marxism” website and a leading figure of the International Marxist Tendency.

The first speaker at the meeting was Gabriela Perez Noriega, the Legal Director of the Leon Trotsky House Museum in Mexico, who has played an extraordinary role in running the Museum against all odds in the last few years and has undertaken a whole series of initiatives to renew it. Because of the impact of the Covid-19 pandemic, the Museum has been closed to the public for the last eight months, depriving it from much needed income. The International Marxist Tendency already organised an international financial appeal to support the Museum which raised over 10,000 euro. This rally was now the launch of a similar campaign in Brazil.

Her intervention was followed by a recorded video message by Esteban Volkov, Trotsky’s grandson. Esteban explained the historic importance of the Trotsky Museum which is housed in the last residence of Trotsky and his household until his assassination on August 20, 1940. “The importance of the Museum is to defend and re-establish historical truth” he said, and this historical truth has to be transmitted to the new generations. He thanked the comrades for organising the campaign.

Alan Woods then spoke and started by explaining how “Esteban Volkov is a living link to history, the last living eyewitness to the bloody events of August 20, 1940, when a Stalinist agent in a coward and vile way, put an end to the life of the great Russian revolutionary who, together with Lenin led the great October revolution”. Alan explained how the last years of Trotsky’s life, which he spent in exile in Mexico, he considered to be “the most important work of my life”. It was a time in which Trotsky waged a heroic struggle in defence of the genuine traditions of bolshevism. He was a lone man, alone in the world, faced with the most monstrous bureaucratic murderous state machine of Stalinism. In these conditions, Alan explained, “Trotsky defended the traditions of October” and produced some of the greatest works of Marxist theory” amongst them The Revolution Betrayed, In Defence of Marxism and his last incomplete work, the biography of Stalin.

Alan Woods highlighted the role played by Gabriela Noriega in running the Trotsky Museum and developing it at all levels. Alan closed his intervention by saying Padura’s book is an extraordinary novel “which combines a great literary quality with strict respect for historical truth” and he strongly recommended all to read it.

Alan was followed by Leonardo Padura, the renowned Cuban writer, who joined the meeting from his home in Havana. He thanked Alan Woods for his “generous comments on my book” [The Man Who Loved Dogs], as well as those by Esteban Volkov. “I am just an author who read about Trotsky’s life and work in order to write a novel”, he said. He explained how in his first visit to Mexico in 1989 he asked a friend to take him to the Trotsky House Museum. “Cuba had followed in relation to Trotsky the same policy as that of the USSR, that is to ignore him, and therefore I knew very little about him. There I felt history”. Later on, Padura explained, he found out that Trotsky’s assassin had died in Cuba. This combination of factors was the origin of his book. The book, The Man Who Loved Dogs, was launched in Mexico at the Trotsky House Museum in 2017, by Padura, Esteban Volkov and Alan Woods at a very successful meeting. Leonardo Padura pointed out how encouraging it is that there is still a lot of interest in the life and work of Leon Trotsky. “I feel a bit out of place amongst such experts on Trotsky, as I am just an author who attempted to use what happened to Trotsky to understand my reality. It is a book written from Cuba by a Cuban, and that is what makes this book very peculiar”.

The meeting was closed by Roberto Robaina and Serge Goulart, who thanked all the participants and committed to carrying out the campaign in support of the Trotsky House Museum in Brazil.

The meeting, which was conducted in Spanish and Portuguese, was followed by viewers from all parts of Brazil, as well as many from across Latin America and Spain and beyond.