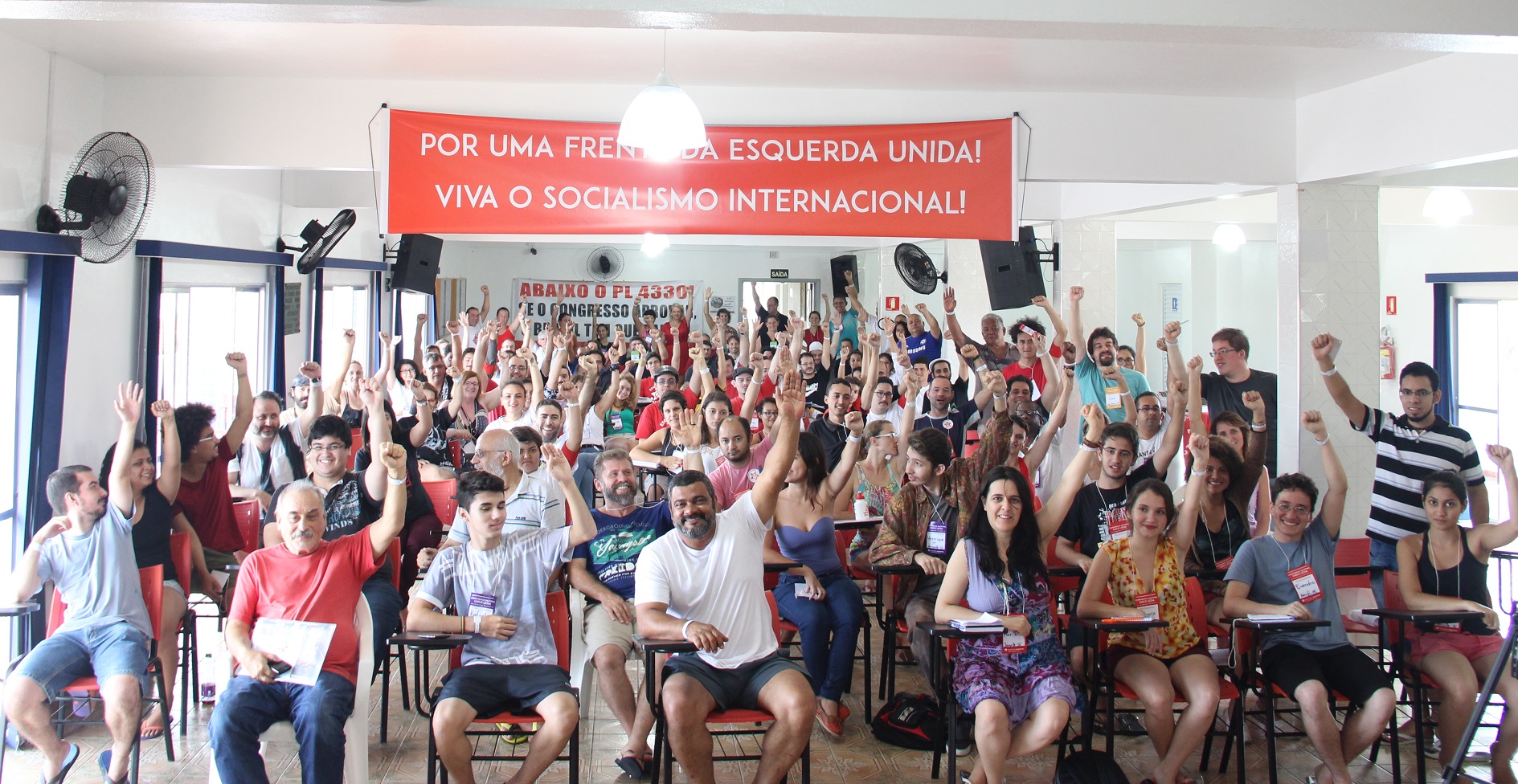 On April 20 and 21, Esquerda Marxista held its "Chico Lessa" National Conference in the city of Praia Grande, near São Paulo. There were more than 100 participants from different states of the country, including delegates from the different regions. The delegates were elected following political discussions over the Central Committees report on the situation in Brazil. The Conference took place after the successful National Cadre School, an educational meeting held between April 17 and 19 in the  same area as the Conference.

This Conference of Esquerda Marxista was dedicated to Chico Lessa, a Central Committee member who died on February 28 in a tragic accident. The conference opened with a moving tribute to our comrade Chico, whose life was marked by a sincere dedication to the struggle for socialism. At the end of the homage, a cry echoed in the auditorium three times: Chico Lessa, presente! It was an emotional tribute, but we came out of it with the conviction that we will continue his struggle. 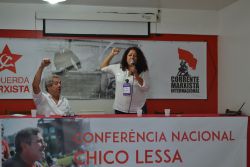 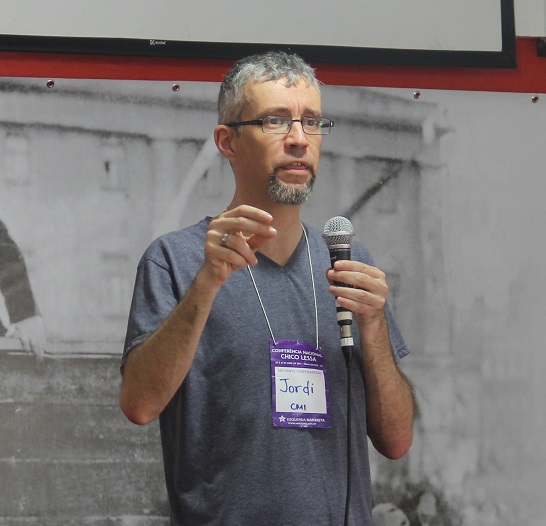 Comrade Jorge Martin, from the International Secretariat of the International Marxist Tendency (IMT), presented a report on the international political situation. He emphasized the deep crisis in capitalism and the willingness of workers and youth around the world to struggle. This has been exemplified by the large movements that erupted since 2011: the Arab Spring, the Occupy Movement and the demonstrations against racism and police violence in the US, the movement in Taksim Square in Turkey, the Indignados movement in Spain, demonstrations, strikes and general strikes in Greece, Spain, France, Portugal, Italy, etc.

Jorge Martin also noted that these great mobilizations had not expressed themselves through traditional parties of the working class, whose leaders have become linked to a policy of defending capitalism. At the same time, a proletariat has emerged that is looking for reorganization on the basis of class independence, which is expressed clearly in the growth and victory of SYRIZA in Greece, and the emergence and rise of PODEMOS in Spain. Even with the shortcomings and vacillations of the leadership of these parties, the fact is that they managed to pull significant portions of the masses to their banner by speaking with a much more left wing voice than the traditional parties. 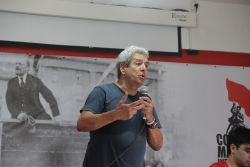 Comrade Serge Goulart presented the report of the Central Committee. The report was focused on the national political situation and the tasks of the Marxists, noting that the situation in Brazil is part of the global crisis of capitalism and the consequential global class struggle.

He pointed out the change in the political situation that began in June 2013, with the massive popular demonstrations throughout the country. The demonstrations were followed by the start of mass strikes in 2014 (street cleaners, bus drivers, construction workers, etc.) and in 2015 (at VW and Mercedes plants, the teachers in Paraná and other states, etc.). These demonstrations show that the Brazilian proletariat does not feel cornered, nor defeated, but strong and willing to fight, despite the class collaborationist leadership.

The new political situation was also expressed in the 2014 elections. The PT, although winning the 2nd round of the presidential elections thanks to the masses closing ranks to prevent the victory of the PSDB, was harshly punished in the main working class centers of the country. Soon after the elections we said in the "Open Letter to Lula, Dilma and the PT leadership" that the narrow victory of Dilma was a final warning from the working class to the party. Clearly the party learned nothing, as after the election they only deepened the previous policy of austerity. The Dilma Government implemented what can only be described as post-election fraud by putting into practice everything she criticized her opponent, Aécio Neves, for: submitting further to the interests of the capitalists, putting in place a policy of austerity with tax increases and cuts in the budget for areas such as health and education, in addition to attacks on labour rights (decrees 664 and 665) and the continuation of privatisations. 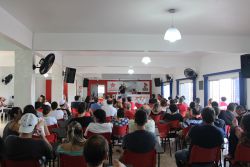 Even in the case of the draft bill 4330, which legalises outsourcing, the government refuses to oppose it. Instead, they negotiate amendments just to ensure the collection of federal taxes.

To complete the picture, the PT is constantly under attack but does not react in the slightest. The Party headquarters are the target of violent attacks while the leadership limits itself to ask for a police investigation. PT leaders are convicted and imprisoned in farcical trials from criminal action 470, the so-called "monthly allowance", and neither the party nor those indicted fight back. These leaders say we must have “respect” for the blatantly unjust bourgeois courts. When the member of parliament and retired army officer, Jair Bolsonaro, publicly advocates putting the president in front of a firing squad there is shockingly no reaction from the PT. All this does is embolden the right wing to go on the offensive with their reactionary agenda. At the same time, the PT is unable to rally its members onto to the streets because of the destructive austerity that it is implementing.

All of this is deepening the break of the working class with the PT. The youth have abandoned the party some time ago, and the workers are following the same path. The PT is going down the same path of PASOK in Greece, the PS in France and the PSOE in Spain. For the revolutionaries, there is no more room for the construction of socialist ideas within the PT. Given all this, the Central Committee of Esquerda Marxista proposed to the Conference that the Marxists leave the PT.

After a rich debate, with different interventions from the floor, it was unanimously decided that Esquerda Marxista should leave the PT in order to continue the struggle for the building of a revolutionary organization. 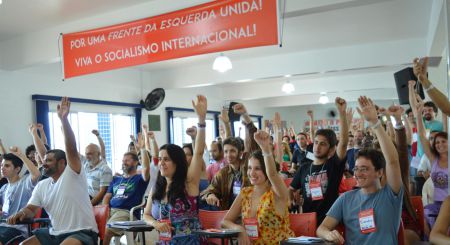 It was also unanimously approved that the Marxists agitate for a left front that seeks to gather activists, trade unionists, student groups, parties and other organisations that are willing to carry out a joint fight in the class struggle. In this sense, Esquerda Marxista has presented a first draft manifesto for open discussion, entitled "Manifesto for a Left Front. Unite to win and make a new world be born! "

Esquerda Marxista will continue an internal debate until September about the next steps to be taken by the organization in the current situation. The Left Front is the central focus for the organisation, combined with the campaign "Public, Free and For All: Transportation, Health, Education! Down with Repression" amongst the youth.

The Conference closed with a great mood of enthusiasm. The decision to leave the PT opens the door to new opportunities in the building of the organization. This was already noticed in discussions with contacts after the publication of the proposal of the Central Committee to the Conference.

At the end of the Conference, the comrades sang "The Internationale", the anthem of the revolutionary working class. Clearly, those in attendance came out of the conference with a renewed willingness to fight for revolutionary socialism. We must continue the struggle of comrade Chico Lessa, who this historic Conference was named after.

Join us in this fight!