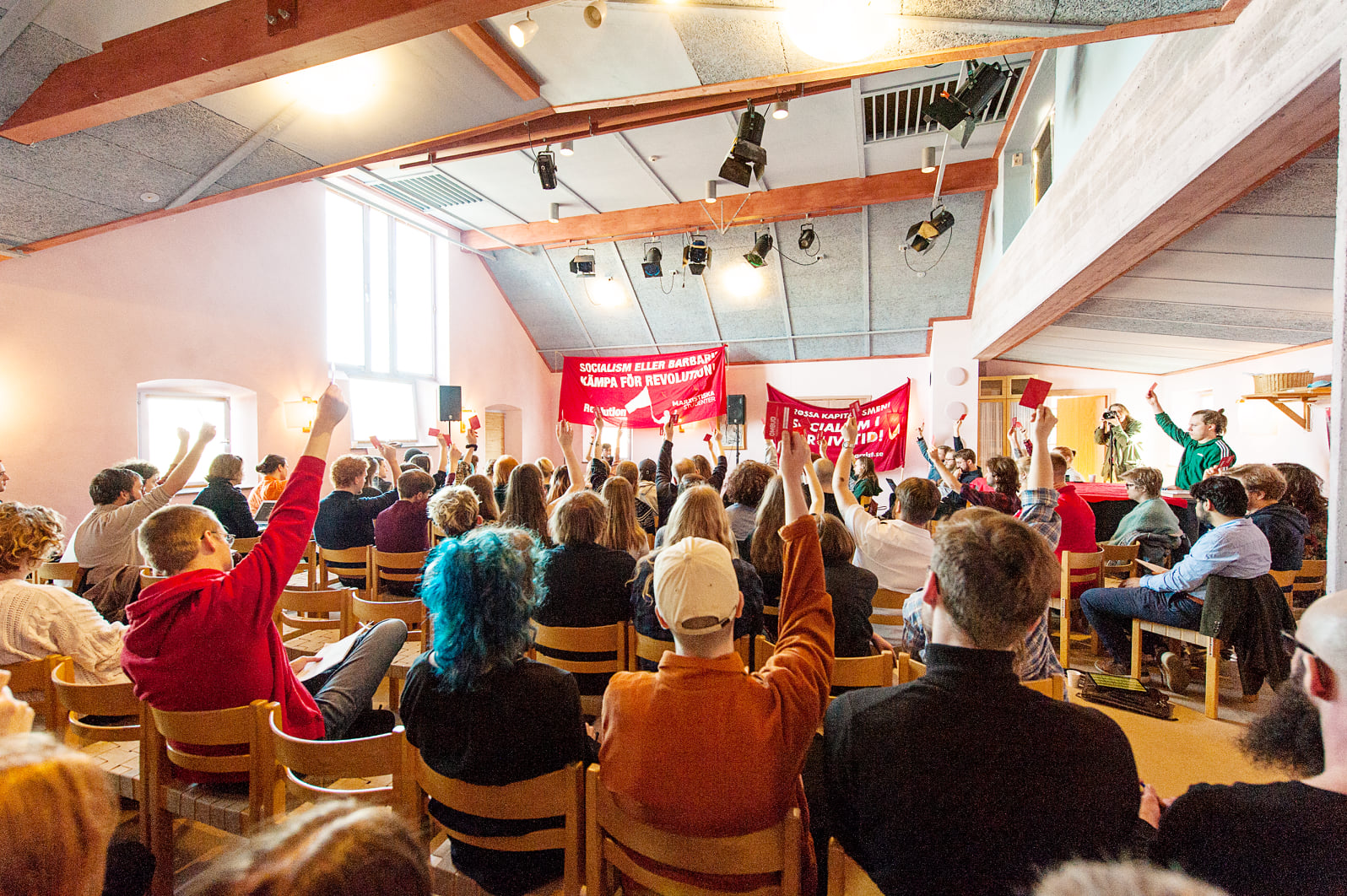 Over the weekend, over a hundred Marxists gathered for the national congress of Revolution, the Swedish section of the International Marxist Tendency (IMT), in preparation for the revolutionary events that lie ahead of us both in Sweden and on a world scale.

[Read the original report in Swedish]

The weekend was kicked off with discussions on perspectives for the class struggle in Sweden and around the world. Ylva Vinberg, who led off the discussion on the Swedish class struggle, explained the ruling class’ hypocrisy in the context of the war in Ukraine.

“It is clear that the Swedish capitalists have important interests at stake in this conflict. All of the same party leaders and commentators in the capitalist press who cheered on Sweden’s participation in the invasion of Afghanistan, now condemn Russia’s invasion of Ukraine in unison […] Pictures and reports are being churned out to show the devastation and suffering that the Russian invasion has caused. Compare this with the US invasion of Iraq in 2003 – where were the sanctions then? Where were the suspensions for US teams in sports events, and so on?”

All over the world, the IMT is fighting under an internationalist banner: the main enemy is at home. While our comrades in Russia are fighting against Putin and the Russian oligarchy, the struggle of Marxists in Sweden is above all with Swedish imperialism and its allies in the EU and NATO. 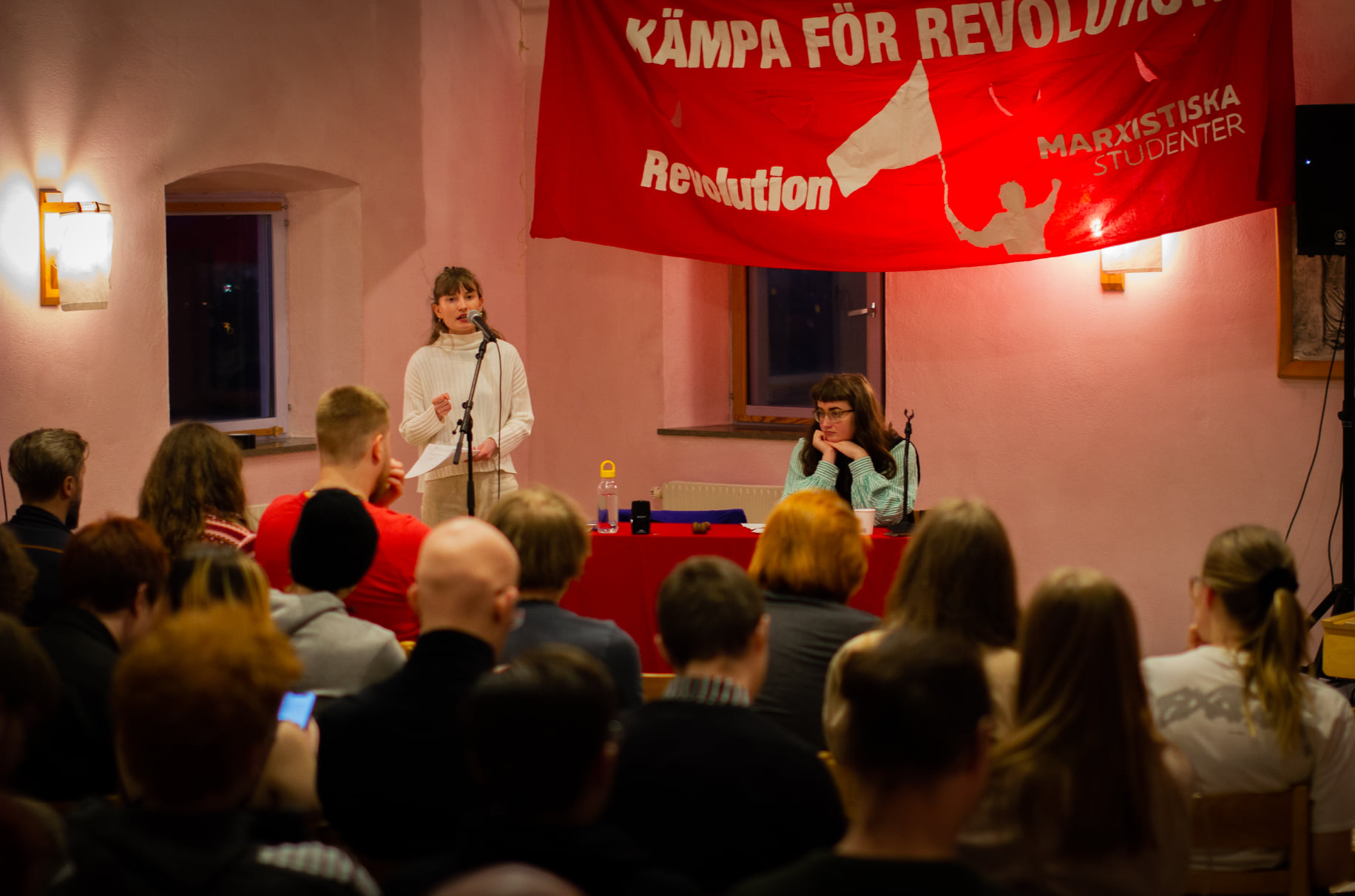 Over a hundred Marxists gathered for the national congress of Revolution in preparation for the revolutionary events that lie ahead of us both in Sweden and on a world scale / Image: Revolution

During the discussions, several contributions emphasised the impact that inflation in particular will have on the class struggle. For instance, Alexandra Bryngelsson explained how members of Kommunal [the union of blue-collar public sector workers] will only receive a 1.4 percent wage increase this year, while inflation is at 4.5 percent and rising.

“Workers are under pressure from both falling real wages and ever-increasing pressure in the workplace. This is a recipe for heightened class struggle – the struggle of the midwives in the autumn was just the beginning.”

The comrade also stressed that the current union leaders are, of course, anything but willing to fight for the conditions of their members. Within the Swedish working class, there is a long tradition therefore of continuing the fight outside established channels, not least through wildcat strikes. Such action can, in turn, shake up the sluggish trade unions, and bring other, more combative elements to the fore.

The process of radicalisation that is taking place in Sweden is only part of the revolutionary process that has gained momentum on a global scale since the crisis of 2008–2009. 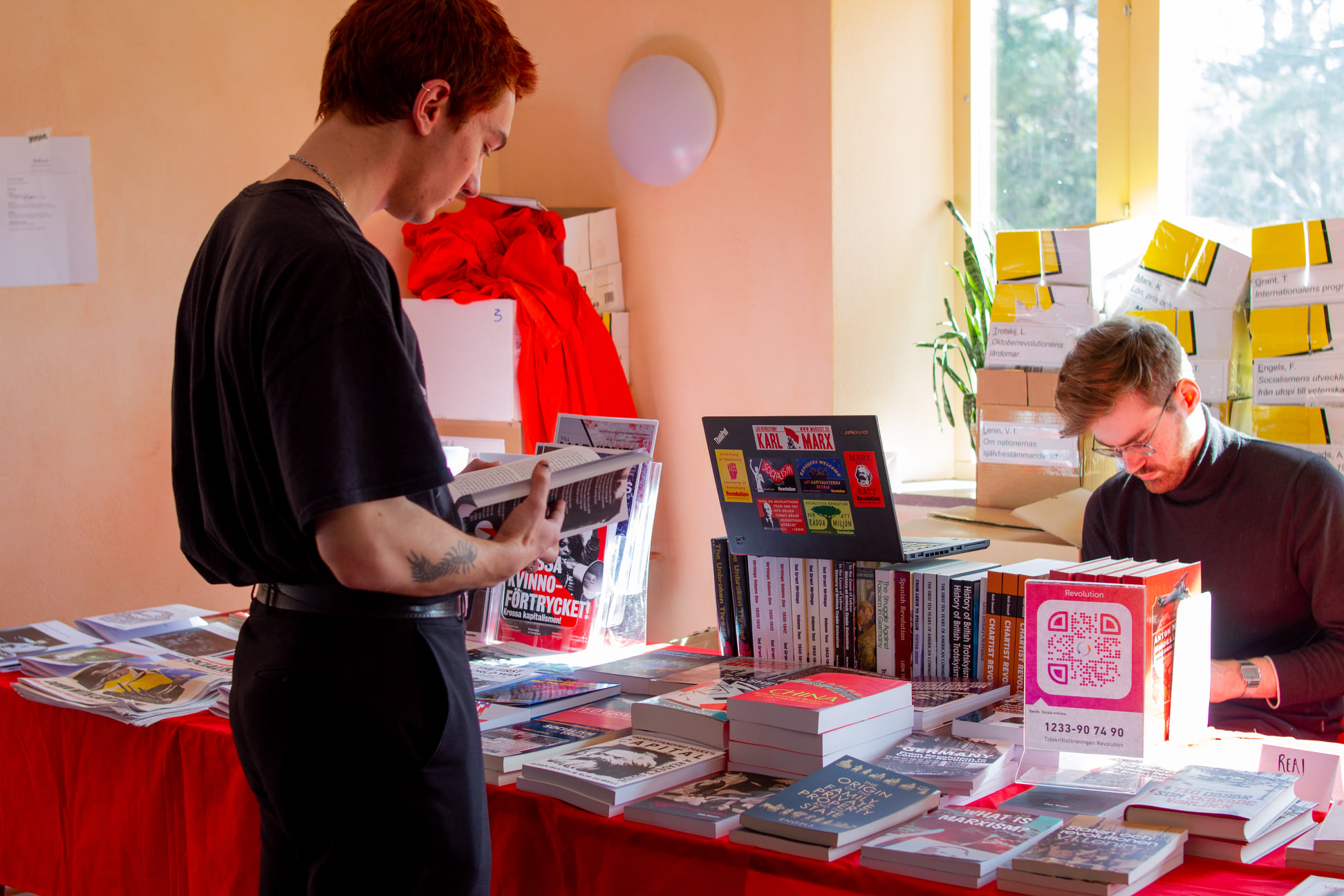 Humanity today is facing a choice between socialism or barbarism – and we are fighting against the clock to ensure that it is socialism that wins / Image: Revolution

Niklas Albin Svensson, who works for the International Marxist Tendency in London, referred to some results from Edelman’s Trust Barometer 2022, which studies public confidence in various institutions. A majority in the 27 countries where it conducted its survey agreed with the statement that “capitalism as it exists today does more harm than good in the world”. One third also preferred “centrally-managed economies” to so-called “free market economies”. This is particularly striking given that there are no mass parties fighting to abolish capitalism. It is clear that workers and young people around the world are drawing far-reaching conclusions on their own from the crisis of capitalism.

This laid the foundation for discussions about building the forces of Marxism internationally and in Sweden. In an introduction to the discussion, Fredrik Albin Svensson highlighted a demonstration organised in Bilbao and Pamplona in Spain by young communists, where 7,000 participants marched under such slogans as “Down with the dictatorship of the bourgeoisie!” and “Workers' Revenge – Socialist Revolution”.

He emphasised that there are large groups of young people who understand that the system is the problem. But it is only scientific socialism – Marxism – that has the answer as to how it can be abolished. If we build a strong enough Marxist tendency among those who have drawn revolutionary conclusions today in Sweden, we will be able to reach out to broader layers of workers as they draw the same conclusions tomorrow. Everything is based on the work we do now.

The weekend ended with a fiery speech from Stefan Kangas, who explained that humanity today is facing a choice between socialism or barbarism – and we are fighting against the clock to ensure that it is socialism that wins. On that note, everyone joined in lifting the roof with a rendition of the Internationale and Bandiera Rossa. “Damn, that was the most beautiful version I’ve ever heard,” commented a comrade from Umeå.

“I don’t know how the rest of you felt, but I had a hard time keeping myself from welling up. I didn’t think the event could surpass Marxism 2021, and I’ve been proved wrong. Forward comrades!”

Those words sum up the deep sense of determination and confidence that we all left the weekend with. Long live the IMT – forward to the socialist revolution!