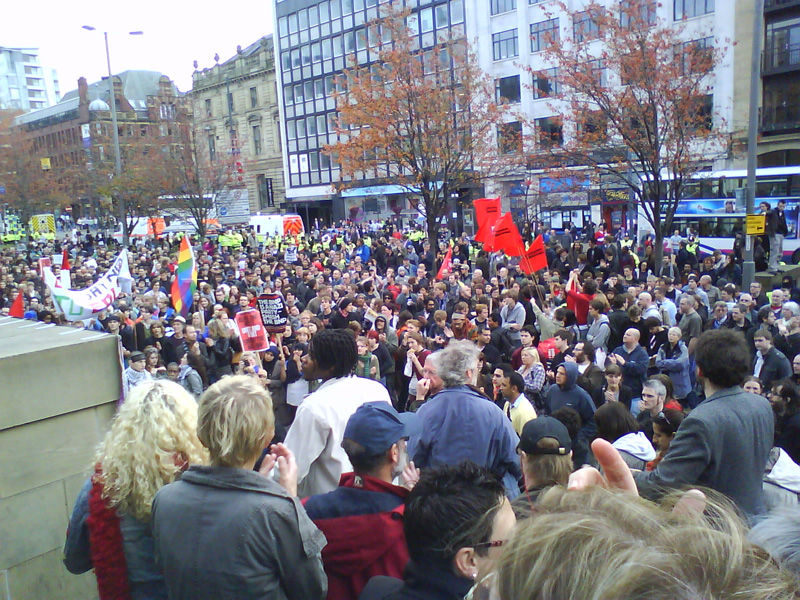 A demonstration in Leeds in November organised by the English Defence League (EDL) revealed quite clearly that the police were prepared to let the EDL get through their lines, while at the same time they poured huge resources into keeping the anti-fascist protestors bottled in, proving once again that it would be naīve to believe we can rely on the police to keep us safe against the fascist hooligans. The experience in Leeds, however, does highlight the need to review what kind of tactics should be adopted to fight these fascist thugs.

In the first week of November, a mob from the English Defence League (EDL), a rag-tag collection of football ‘service crews’ and other assorted hooligan and racist elements, mobilised in the northern city of Leeds. Clearly hoping to capitalise on their ‘successes’ in Manchester (where they managed to mobilise several hundred people) and Luton (where the absence of any counter-mobilisation by the labour movement allowed the EDL’s thugs to attack Muslims in the street), several hundred of these fascist yobs gathered in City Square.

On a busy Saturday afternoon, a huge police presence swamped the city centre; roads were closed and pubs emptied. A counter-demonstration was organised by Unite Against Fascism (UAF), the umbrella organisation for the anti-fascist movement, and supported by the Trades Council. Police estimated that around 900 EDL supporters attended the fascist demonstration, and around 1500 anti-fascists attended the UAF demonstration. The counter-mobilisation was ‘fed’ by several marches from different parts of the city; this correspondent joined the march from Hyde Park.

However, the outcome cannot be described as a clear victory for the anti-fascist movement. Whilst the disgusting scenes we saw in Luton were not possible here due to the size of the counter-mobilisation (and resultant police presence), a significant section of the EDL crowd succeeded in breaching the police lines and rampaging down Boar Lane, towards part of the city’s gay scene. The police successfully ‘kettled’ the anti-fascist mobilisation, forcing us into a small area without right of exit, thereby keeping us out of the way whilst the fascists caused chaos. The following Associated Press film clearly shows this:

Contrary to the propaganda of UAF, anti-fascist demonstrations do little to convince those taken in by the arguments of the EDL to change their views. Only attacking the arguments of the fascists, and providing a socialist alternative, can do that. A fighting socialist leadership of the labour movement is required to win over those who have turned to the likes of the BNP and even the EDL for lack of an alternative.

As we saw in Luton, without a sizable counter-mobilisation, the fascist thugs will attack Muslims and others with impunity. In this respect, the mobilisation was of only limited success: it prevented the fascists from being able to roam the streets unchallenged, but failure to break through police ‘kettling’ meant that we were not there to stop that group of thugs getting down Boar Lane with the intention of targeting the Gay Bars there.

So, what lessons can the labour movement draw from this episode?

1. The police cannot be trusted to deal with the fascists. 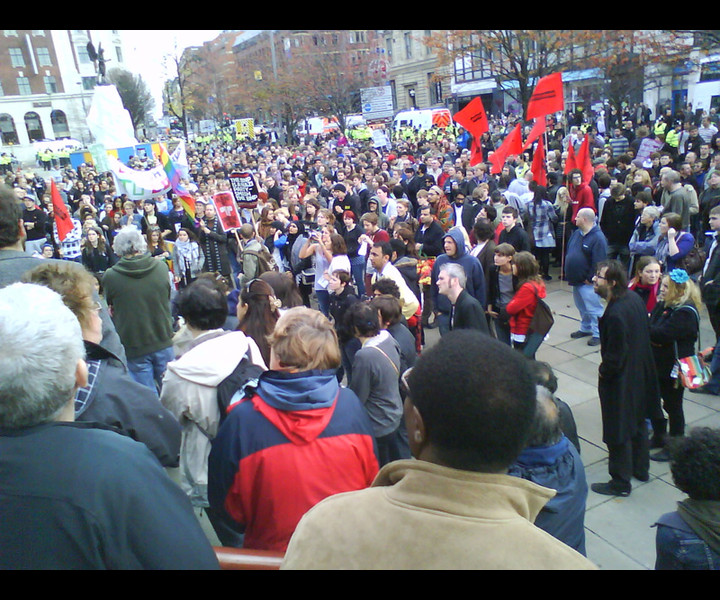 The police demonstrated quite clearly that, whilst they may have no love for “football hooligans,” they were prepared to let the EDL get through their lines. Instead they poured huge resources into keeping the UAF demo bottled in. It would be naïve to believe we can rely on the police to keep us safe against the fascist hooligans. Were it not for the counter-demonstration, there would probably have been no-one to stop the fascists, as was the case in Luton.

2. The 'elders' and communal leaders of ethnic minority communites, such as the Muslim community, cannot be relied upon to mobilise against the fascists.

Following police advice, the local leadership of the Muslim community advised Muslims not to mobilise against the EDL, in the name of ‘preventing violence’. This was a great shame – the young Asians who did turn up were amongst the most militant on the demonstration. As happened in Birmingham, where Muslim youth succeeded in driving the EDL from the streets, had young Muslims been properly mobilised, the conservative leadership of the UAF would not have been able to hold back the counter-demo and the EDL would have been opposed properly. It is the responsibility of the labour movement to make every effort to mobilise youth from Asian and other communities on a class basis, despite the opposition of the community leadership.

3. UAF is incapable of organising a militant demonstration that can confront the fascists and the police who protect them. 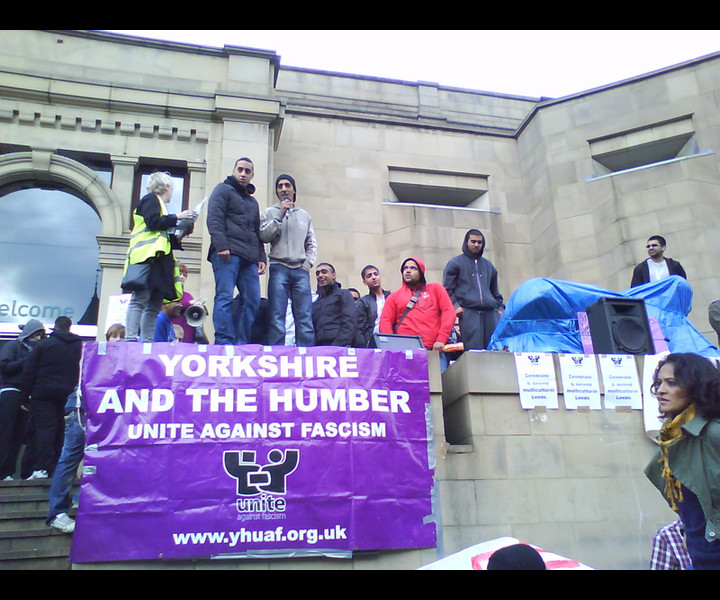 Which brings us onto the subject of the UAF itself. Despite appearing to put some effort into this demonstration, including sending joint secretary Weyman Bennett, UAF completely failed to offer any sort of leadership. Content to wait for police permission to do anything, they were complicit in the restraining of the demonstration. Had they called on the demonstrators to march, they could probably have pushed back the police lines and challenged the EDL mob. Instead, Weyman Bennett contented himself with ludicrously shouting, “Where are you?” This obsession with always doing everything ‘legally’ leads to only one thing: being completely out-manoeuvred by the fascists and the police.

UAF is a popular front, modelled on the ‘anti-fascist’ popular fronts in 1930s Spain and elsewhere. A popular front tries to bring together all organisations that supposedly oppose fascism, regardless of their class basis. The UAF therefore includes the Young Conservatives, and Saturday’s rally featured a Liberal Democrat councillor. This might sound like a good idea, bringing together the largest number of people to fight the fascists, but in reality it becomes so broad that it has to be completely devoid of programme or ability to fight.

The UAF are unable to answer the lies of the far-right on a class basis, and are not prepared to do what it takes to confront the fascists, or defy the law if necessary. For example, when the likes of the BNP seek to blame heavily-exploited migrant workers for job losses, the UAF have no answer. We should in response be fighting for unionisation and equal conditions for all workers, local and migrant.

4. No small left-wing sect or group can substitute itself for the working class.

Due to the lack of leadership of the UAF, some of the left-wing sects tried to fill the void, shouting revolutionary slogans and trying to rally the demonstrators to breach the police lines. It was completely ineffective. The labour movement, in particular the local trades councils, have a responsibility to mobilise the working class against the fascists

A real weakness of the demonstration was the absence of the local working-class. A stirring speech by one of the striking refuse workers (ironically followed by one of the Liberal Democrat councillors trying to cut his pay) was the highlight of the afternoon, but very few workers were mobilised. Though the Leeds Trades Council supported the UAF demo, it should have done much more to mobilise the local unions and their members. The role of a Trades Council is to coordinate the actions of the local labour movement, not simply to turn up to demonstrations and cheer from the sidelines.

Many union branches which have the right to send a delegate to the Trades Council fail to do so – there must be many militant workers, particularly in the light of the refuse workers’ dispute, who could make a big difference to the way the Trades Council works. These organisations are inactive because they are cluttered up with people from the last period, the period of inactivity. We need to appeal to a new layer of workers, steeled in current struggles, to get involved.

Finally, we should note that, contrary to the propaganda of some left-wing sects, we are not facing the ‘rise of fascism’ in our time. The EDL attracted virtually no support from people in Leeds, apart from a section of football ‘supporters’ attracted by the promise of violence Most people this correspondent has spoken to were rightly disgusted with their actions and angry with them for causing such trouble.

We should not underestimate the damage the far right can do, but nor must we paint it as something it isn’t. Many who sympathise with these organisations are workers who have been disaffected by the failures of the Labour leadership at national and local level. To them, we must give socialist responses to the lies of the fascists. We must fight for the labour movement to adopt socialist policies that benefit working people and their families. Nothing else will do.