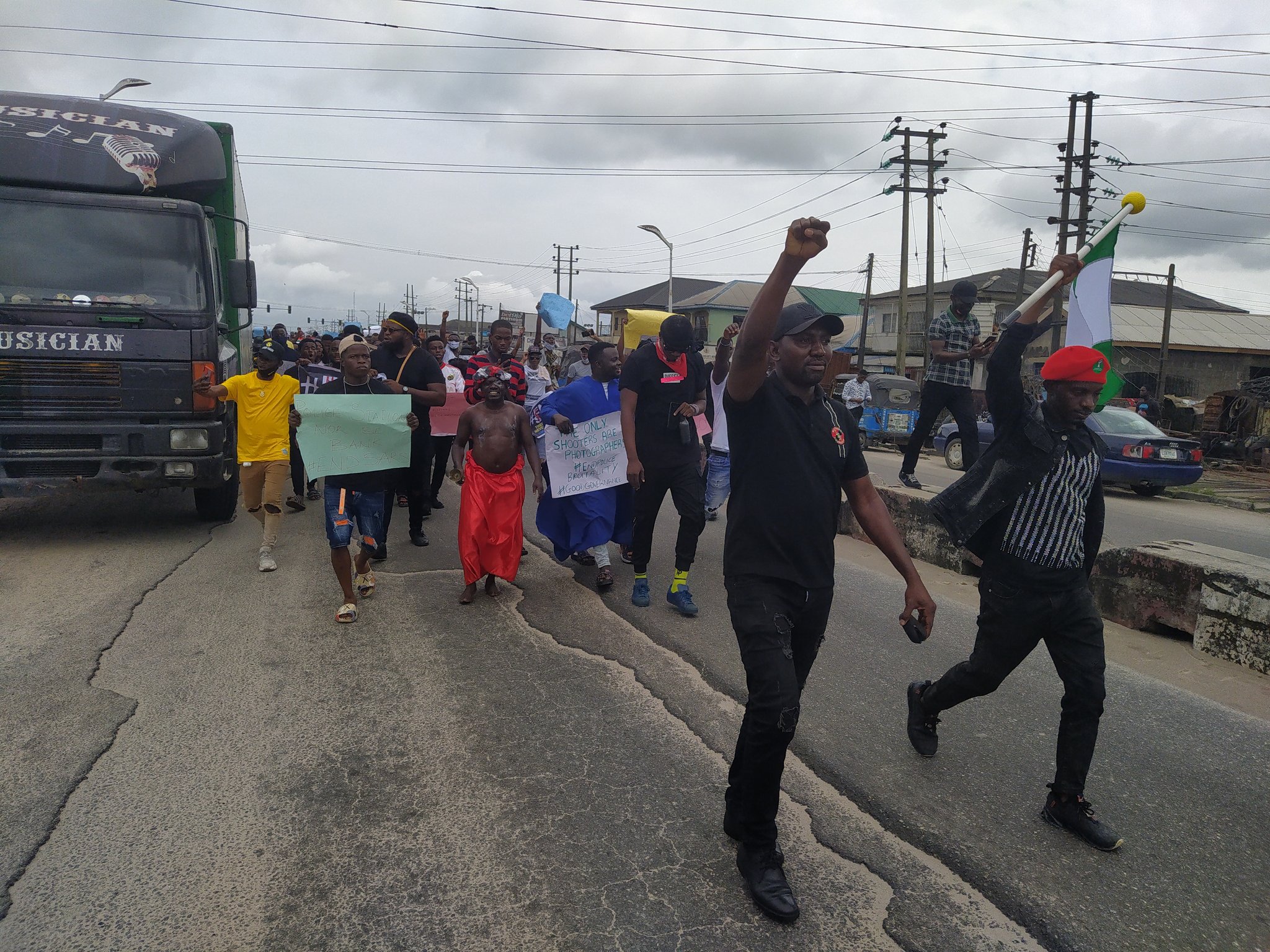 For days, protests have rocked cities across Nigeria. It is organised around #EndSARS, a movement that is calling for a complete ban of the so-called “anti-robbery” wing of the Nigerian Police, the Special Anti-Robbery Squad (SARS – no relation to the coronavirus, SARS-CoV-2). Set up in the mid-90s to combat incidences of armed robbery, which had become rampant as a result of deepening poverty under the corrupt military regimes, SARS has since then metamorphosed into a dreaded force associated with all sorts of evils.

It is renowned for harassment of innocent citizens, extortion at gunpoint, and extra-judicial killings of suspects. Youth, including students, have been particularly targeted and profiled by this heavily armed, special police. From certain kinds of hairstyle, to carrying a backpack, to wearing a particular type of denim trousers, just about anything can land an average male youth, especially in the South, into an encounter with SARS, with its associated harassment and extortion.

An army of enraged youth

It is not by accident that the overwhelming majority of those participating in the protests, that are spreading like wildfire, are young. The bottled-up anger of this generation against unfair profiling and harassment by SARS in particular is finding an outlet in the developing movement, which started with no defined or any central organisation leading it. The call for protest resonates with almost every youth in the country.

The youth in Nigeria, apart from being the target of police harassment, are particularly hard hit by the general crisis of Nigeria's neo-colonial economy. According to official data from the National Bureau of Statistics, as of Q2, 2020, the unemployment rate in Nigeria stood at a staggering 27.1 percent (or some 21.7 million people), with another 28.6 percent (or some 22.9 million people) falling into the underemployment category. The combined unemployment and underemployment rate stood at 55.7 percent.

Of the 21.7 million unemployed, young people (aged 15 to 34) make up 34.9 percent, while they also account for 28.2 percent of the 22.9 million underemployed Nigerians. Their rates were the highest when compared with other age groupings.

In the midst of this pervasive unemployment, many youth, including those with postgraduate degrees, have taken to self-employment in various sectors including bead-making, cake-baking, cosmetics, and the sale of all sorts of things; from wigs, to pepper, and foodstuffs, just to get by. Even without police brutality and harassment, the misery of everyday life weighs heavily on the Nigerian youth, who have received absolutely nothing from the state, whose irresponsible armed agents keep rubbing salt into their wounds through unfair profiling, extortion, harassment and in some cases, extrajudicial killings.

The state bows to pressure

The Muhammadu Buhari regime, which in the recent past used force to dislodge protesters from the streets, is today terrified of anything that resembles mass protests. Just two weeks ago, it did everything, including buying off the corrupt reformist leadership of the working class, to prevent the anti-fuel-price/electricity tariff-hike general strike/mass protest called by the NLC and TUC union federations. The regime correctly understood what it meant for organised labour, with all its might and breadth across Nigeria, to go on strike and take mass action at a time when the pent-up anger of the Nigerian masses and youth against the regime is at an historic high. It would have shaken the regime to its foundation, dealing a blow from which it might not have recovered.

Unsure of what the growing #EndSARS movement might become, the regime moved from its initial response of promising to reform SARS to that of a complete disbanding of the outfit in all the state police command centres, and that of the FCT (Federal Capital Territory) too. The men and officers of the dreaded squad were to be disarmed and posted to other police formations, while a new outfit would be formed to combat armed robbery, the Inspector-General of Police (IGP) stated. What this shows is that, despite the limitations of the movement, it was able to extract a concession from the regime, showing how weak the regime truly is.

Too little, too late – the demands keep expanding!

The regime had actually thought the protest would disappear with the announcement of these “concessions” by the IGP, but the army of protesters, who have now realised their own power, would have none of that. The protests continued, even more militantly on Monday, with more demands on the regime to reform police institutions as a whole. In Lagos, Abuja, Ibadan, Ogbomoso, Sango (in Ogun State), FCT (Abuja), Jos, etc., more and more youth are pouring onto the streets to join the protests, as widely reported on Monday 12 October 2020.

Some of them are already drawing revolutionary conclusions, with chants of “No to APC! No to PDP!” [the two main bourgeois parties in Nigeria] in one of the protest centres.

Middle-class in ferment: a pre-revolutionary development

While the majority of the youth who are participating in the protest are from lower and working-class backgrounds, the bug has actually spread to some layers of the middle-class. In Lagos and Abuja especially, celebrity musicians, comedians, artists and others, pressured by their fans and followers on social media, have come out to join, and in some cases, addressed the protests. In Lagos for example, upscale neighborhoods of Lekki, VI and Ikoyi have seen militant protests for four days running, with both Lekki-Ikoyi & Admiralty Toll Plazas taken over by protesters, causing gridlock.

These are signs of brewing pre-revolutionary ferment. Elements, who in normal times, because of their relative comfort, look the other way when workers and students protest, are today joining the barricades and speaking the language of struggle!

But can police brutality truly end under a class society?

The police, like every armed agent of the state, exist mainly to perform a specific role in class society: to maintain the rule of one economic class over the other class(es). The exploitative rule of the Nigerian capitalist class; the bleeding of our economy by the indolent few; the concentration of wealth at one pole, while the mass majority wallows in poverty at the other; the obscene salaries and allowances of political office holders while workers are paid peanuts; the exploitation of ordinary workers in factories, banks and oilfields by the CEOs and Boards of Directors; are all made possible by the existence of a special force, armed to the teeth, under the direct control of the ruling class. It is this force that they use to maintain the aforementioned order, i.e. in keeping the mass majority, including the working class, in check (and servitude). When the liberals say the police exist to maintain law and order, the “order” they mean, in today's society, is bourgeois law and order.

The police, the armed forces, the secret police, the SSS (State Security Service), and other armed agents, are indispensable parts of the capitalist system, whose primary aim is to maintain class domination and exploitation. The Nigerian police is no exception. Its famed crudity and low cultural level mirror the backwardness of Nigeria's neo-colonial society as a whole. Only in a society where the mass of the working class, who produce the wealth of the society, are organised as the ruling class will there be no need to keep a special force to hold the majority down, because that majority now rules.

So, the fight to completely end police brutality is tied to the fight to overthrow capitalism as a whole, and replace it with socialism.

We completely identify with the yearnings and the demands of the oppressed Nigerian youth who have been pushed onto the streets by the harassment of SARS (and the police in general). We salute their resilience and their heroism. We join them in expanding the demands of the protest (far) beyond police brutality. We must connect this protest with other issues affecting Nigerian youth, workers, students and wider oppressed masses.

See them with sticks. pic.twitter.com/QXK7ues0W5

The unfolding movement has awoken the sleeping giant of the Nigerian youth. Its heroic actions in the last week signal the first shots of the Nigerian revolution. The traditional platforms of resistance, such as student unions, NANS, the trade unions, whose respective leaderships are today in the hands of corrupt elements, will feel the impact of the developing movement. Their members will feel more emboldened to throw out the corrupt bureaucrats at the top: a necessary step towards transforming these once-powerful organisations.

The energy of the youth, combined with the strength of the working class, armed with the right programme, remains the only forces that can confront and defeat the rotten and parasitic Nigerian ruling class, and then begin the process of transforming Nigerian society, and redeeming the dignity of the Nigerian people.