Pakistan
Share
Tweet
We provide this report by Alan Woods from Kashmir, which details the beauty of the region, the pride and strength of its people, as well as the terrible destruction caused by the earthquake. 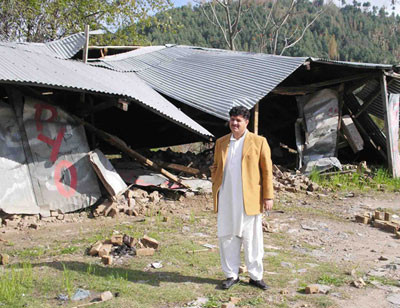 Kashmir is justly famed for its beauty. Situated in the foothills of the Himalayas, its wild scenery seemed to remind me of the more mountainous parts of Scotland or the Pyrenees. Traveling by road from Islamabad, one is struck by the contrast between the hot and dusty plain and the luxurious greenery of the mountain slopes, clad with pine trees. In the distance, just visible above the tops of the trees, are the majestic, snow-covered summits of the world’s highest mountain range. There is a sense of calm and serenity that belies the reality of this tormented region.

It is the start of spring and the trees are bursting into flower. The winters here are cruelly cold, and the worst of the harsh season is over. Yet in the (unheated) guesthouse where I was staying I felt the cold of the night even indoors with a thick blanket. Outside it poured with rain during the night. The fate of the many poor people who are sleeping in tents and makeshift shelters in such conditions does not bear thinking about.

During the day the weather is pleasant. The sun shines though there is a sharp breeze from the mountains. From all sides one hears the tapping of hammers as people try to recreate their shattered lives. The people of Kashmir are a resilient breed, good-natured, hospitable and generous. They are also a proud and independent people, used to suffering – and fighting. As you watch the efforts at reconstruction, the building workers heaving heavy rocks (of which there seem to be an inordinate number), you marvel at the capacity of the human spirit to rise above even the most fearsome adversity and triumph.

But the wounds are deep and recent and have not been healed. In place of the sorrow and grief there is a slow, burning anger that will not easily be erased. The anger is directed above all at the authorities that are widely blamed for inefficiency and corruption. This anger has revolutionary implications.

We toured the area in a Japanese four-wheel drive (the only vehicles that can cope with the Kashmiri roads), taking photos of demolished houses for the website. We stopped in front of such a ruin, with a tent pitched beside it. A woman looked out and quickly went inside again so as not to be seen. A boy looked at us sullenly and said not a word. 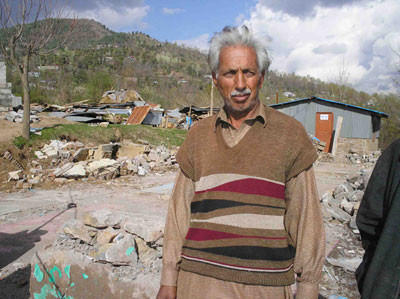 Then a man appeared. His age we could only guess at: maybe sixty or sixty-five. His appearance was that of a man hardened by long years of manual labour. He greeted us politely and shook our hands. “This was my house,” he told us, standing in an empty space with meager remnants of a wall here and there. “It was a fine house,” he said. “It took me thirty five years of work in the Middle East to be able to build it. “Here,” he indicated the surroundings with a sweep of the hand, “are all my life’s savings.”

Had he lost any of his family? “No one was killed, thank God, but my daughter, who is nineteen years of age and had just matriculated from high school, is in hospital. She will be crippled for life,” he said grimly. He showed us a new house he was building with his own hands, painfully, slowly. Was he getting any help? He shook his head. In the beginning the government gave some help to the people, but now it is being given only to those with connections… At this point he launched into a tirade that my interpreters had difficulty in keeping up with. “He says it is all promises but the rich do nothing for the poor. The government does not care about us. We are the forgotten ones.”

I took my leave, unsure what to say to this man who had lost everything. I promised to give his case and that of others the widest publicity among the British working class and that the PTUDC would continue to do whatever they could. It sounded feeble enough under the circumstances. 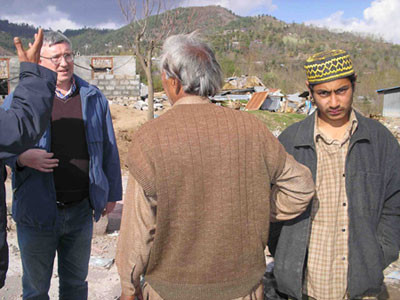 Walking away from the scene of desolation I realized that this man, who had sacrificed and slaved all his life, was describing to us not the ruins of a house, bricks and mortar and wood, but the wreckage of a life, the ruin of a dream and a hope. Is it not enough that the working people are exploited and robbed every day of their life without being cruelly deprived of those little treasures they have managed to accumulate for themselves through a lifetime of toil?

“Who will help me now?” The question echoed in my mind long afterwards. Our campaign helped many people survive the worst of the earthquake. But the immense task of reconstruction demands not thousands but billions of pounds. Does this money exist? Yes, it exists. Every year the Pakistan government pays about 40 percent of its revenues to the army to buy expensive toys for the generals (they will demand even more now that President Bush has promised to help the Indians develop their nuclear weapons). Roughly sixty percent is paid in interest repayments to the big international usurers. What is left to help victims like the man I spoke to?

I never knew his name. That is no matter. He is just another nameless victim – not of Nature or God but of the injustices of capitalism. We cannot prevent earthquakes, nor does it make any sense to blame inanimate Nature or direct our eyes to the Heavens, whether to curse or implore. The problems here derive from a social order that has been created by men and women and can therefore be changed by them. 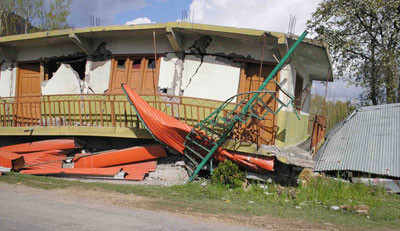 The solution for all such victims is a fundamental change in the existing order. If the government really cared for the people of Kashmir it would immediately repudiate the foreign debt and divert government resources to the reconstruction effort. It would slash the wasteful arms expenditure for the same purpose, creating instead a programme of useful public works. It would arrest all those guilty of speculating and robbing the poor people and keep prices down. It would nationalize the banks and big building firms and launch a crash programme of building roads, houses, hospitals and schools. It would introduce a steeply progressive income tax to make the rich pay for these things.

But we know that the present government will do none of these. The people can place no trust in a government of the rich but must take power into their own hands. The national liberation struggle of the Kashmiri people can only succeed if it is linked firmly to the class struggle and the programme of the socialist transformation of society. That is the message that the PTUDC and The Struggle are delivering loud and clear to the people of Kashmir. It is a message that is not falling upon deaf ears.

There follows a number of short responses by a number of people who were helped by the PTUDC immediately after the earthquake, who were asked to say how it affected them and how they saw the work of the PTUDC. First, we reproduce the words of a doctor who traveled the long journey from the deserts of Sindh to help the relief effort in Kashmir: 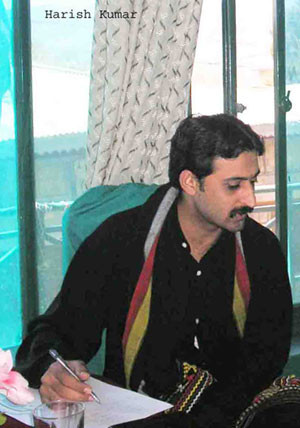 Most people were suffering from viral infections, chest congestion, tuberculosis and posttraumatic symptoms. People also had serious injuries due to the earthquake, such as broken legs and arms. There were also psychiatric problems as well. People were complaining of loss of sleep and anxiety.

The sheer scale of the tragedy was overwhelming. Fortunately, the PTUDC has raised sufficient funds nationally and internationally to provide us at least with basic medicine to provide emergency medical care. Most of the medicines were anti-viral, anti-bacterial, anti-protozoa, anti-pyretic, tonics, multivitamins, nutrition supplements and lots of other medicines beyond description.

Earlier a Revolutionary Solidarity Camp had been established under the banner of the PTUDC. With the active collaboration of many Kashmiri comrades and other volunteers all over Pakistan we set up different committees which consisted of Kashmiri workers and youth. All relief goods, which were collected from Pakistan and internationally, were distributed through these committees in different parts of Kashmir.

A total of 27 truckloads were distributed by these committees. This should have been 29, but two trucks were disgracefully hijacked by the Pakistan Army. We distributed thousands of blankets, tents, sacks of sugar and flour, clothes, drinking water and cooking utensils – all things desperately needed by the population. Ten trucks were sent to Muzaffarabad, 10 to Bagh and 7 to Rawalakot. 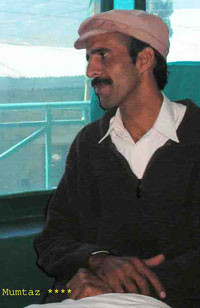 Without the help of PTUDC this would have been impossible, and I would like to express my heartfelt gratitude to all those who donated so generously to this important work, which undoubtedly saved many lives and comforted many poor and desperate people in their hour of need.

2) My name is Mumtaz **** and I am a government employee from Ratnoi (district Bagh). My town was severely hit by the earthquake and my own family suffered and grieved many losses. I lost my father, two sons and one daughter, and my house was totally destroyed. My wife is still alive but she lost both legs.

At first we completely lost all hope, but when the comrades of the PTUDC and the RSC approached us we regained our hope. They gave us all kind of assistance. They played a marvelous role and are continuing to do so.

3) My name is Rashid Sheikh and I am a student from Muzaffarabad. In the earthquake I lost a sister and two nieces. Besides this our house was destroyed. 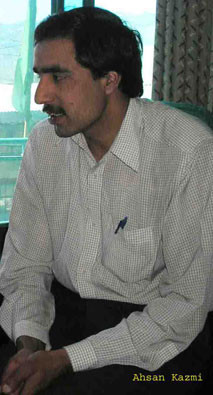 Ahasn Kazmi
My village is 20 miles away from Muzaffarabad. There is a road linking us with the city but it was blocked by the earthquake, cutting off the village totally. Within 48 hours, the comrades of the PTUDC came to my village on foot, since there was no other means of access. They have done incredible work helping the people like myself.

4) I am Ahasn Kazmi, a student from Muzaffarabad. I lost my brother, sister and grandmother. Our house was destroyed in the earthquake, and my father was seriously injured. After the earthquake we found ourselves all alone with nobody to help us. But we were well supported by the PTUDC who provided us with the necessities of life that we lacked. 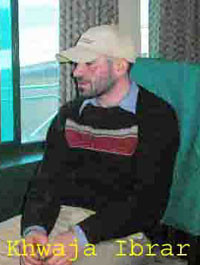 Khwaja Ibrar
5) I come from Muzaffarabad and my name is Khwaja Ibrar. I am unemployed. I lost my mother in the earthquake and now I am living in a tent. I suffered injuries myself. The earthquake destroyed everything we had. It left us with nothing. It is hard to imagine what we have gone through. The PTUDC came to help us. They gave us medicines and the goods of daily life. I do not know what would have become of us with out this help.

6) I am Atif Ali Qazi from the town of Bagh, and I am unemployed. We are a big family and had three houses. All of them were totally destroyed in the earthquake. Many family members were injured. From the very beginning the PTUDC played a more important role than any other organization of the workers. The workers of the PTUDC went door-to-door offering to help people. Nobody else did this. 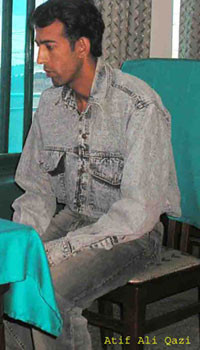