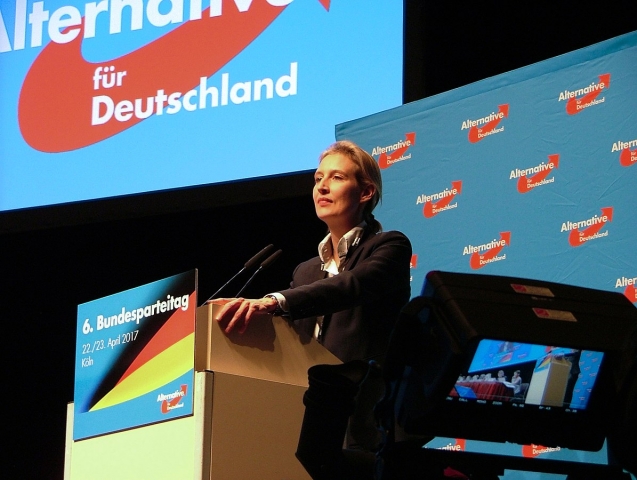 A political earthquake is the best way we can describe the federal elections that took place in Germany on Sunday, September 24. For the first time ever in post-war history an extreme right-wing party has been elected to the Bundestag (federal parliament). At the same time the parties that formed the “Grand Coalition” lead by Chancellor Angela Merkel since 2003 have suffered historic defeats.

CDU leader and chancellor Angela Merkel, who has been in power for 12 years and is likely to hang on for another 4-year term, had hoped that given the relative strength of German capitalism, fairly low official unemployment figures and an alleged “feel-good factor” she and her party alliance of the CDU and the Bavarian CSU would easily win another victory around the 40 percent mark.

However, things are not as she thought they were, and they lost millions of votes and suffered an 8.5 percent drop, scoring 33% - the second worst result in German post-war history. According to the first round of analyses, the CDU/CSU mainly lost votes to the extreme right-wing, so called “Alternative für Deutschland” (AfD) and the liberal FDP. The ruling class would have preferred a coalition of the traditional bourgeois parties – CDU/CSU and FDP – but in the end due to the decline in support for the the CDU/CSU this coalition failed to win a majority.

The Social Democrats (SPD) also suffered a defeat of historic proportions as they were reduced to a meagre share of 20.5 per cent of the votes cast. This is by far the worst performance the SPD has suffered in post-war history and a throws the party back to comparable levels achieved in national elections in 1932 and 1890! When Martin Schulz, the former president of the EU Parliament, took over the leadership in the SPD in January some were hoping that he would lead the party in a more left-wing direction and turn away from the “reforms” of the labour market that former SPD Chancellor Gerhard Schröder had pushed through between 1998 and 2005.

The result of those Schröder “reforms” was and is a massive casualisation of labour in Germany and attacks on the unemployed. Well over a quarter of the workforce is now in some kind of casual employment. Many of them receive wages just about or below the poverty line and need more than one job to survive or have to rely on additional social security to pay their rent. This is, by the way, the main and principal explanation for the alleged German “jobs miracle” and export boom of German industry.

There is a growing differentiation developing between workers in relatively “safe” jobs and the increasing number of casual workers. German variants of soup kitchens (“Tafeln”) where welfare institutions and volunteers hand out free food to the unemployed and working poor are springing up like mushrooms all over the country. At the same time the polarisation between the classes, between rich and poor, is getting wider and wider.

When Schulz last February raised hopes among many workers that he would rectify some of the worst aspects of Schröder’s “Agenda 2010”, the SPD attracted thousands of new members and gained in the opinion polls. Yet Schulz, who is an eloquent phrasemonger, but was never really a left-wing social democrat, under the pressure of big business watered down any substantial promises. This led to a renewed fall in support for the SPD, with a melting away of the party´s public standing, followed by election defeats in important regional elections. The humiliating setback of the SPD in its former stronghold of North Rhine-Westphalia in May was a harbinger of the defeat that was being prepared at national level.

The SPD leaders would clearly have been prepared to continue as Merkel´s junior partner in the coming parliamentary term but in the end they had to pull the emergency brake. Thus within minutes of the polling stations closing, they announced their decision to withdraw from the coalition and return to being the main opposition party. This renunciation of well-paid ministerial portfolios is an expression of panic on their part and is mainly due to the fact that they began to realise that they were about to face the same fate as other social democratic parties in Greece, France, the Netherlands and elsewhere who have been virtually destroyed on the basis of their policies of carrying out counter-reforms. Another “Grand Coalition” of the election losers would have been opposed by most rank and file members and could have even torn the party apart.

In fact, during the election campaign many long-standing SPD members and sympathisers had confessed that they would be casting their second preference vote for the Left Party (DIE LINKE). Thus, by presenting themselves as a fighting opposition – at least in words – these right-wing, social democratic leaders are trying to avoid a critical debate about their own failures in an attempt to maintain their stranglehold over the party apparatus. It is significant that with a left-wing programme the British Labour Party under Jeremy Corbyn has achieved enormous gains, and yet nobody in the SPD leadership is seriously discussing the lessons of the Corbyn phenomenon as this would imply questioning their own role.

The emergence of the AfD

The entry of the reactionary right-wing AfD into the Bundestag on the basis of nearly 5.9 million votes and a share of 12.6 percent of the votes cast, has come as a shock to many left-wing and trade union activists. The major AfD strongholds lie in the East where de-industrialisation since the dismantling of the planned economy in the formerly Stalinist DDR has left behind a large “rust belt” and demoralisation of the local population.

The AfD combines racism and slogans against refugees and immigrants from a Muslim background with extreme liberalism, but so far has skilfully created the image of being a somewhat radical “anti-establishment” alternative that appeals to petty bourgeois and declassed elements in society. It was originally founded as an anti-Euro party by “neoliberal” professors such as Bernd Lucke and figures from within the ruling class such as Hans-Olaf Henkel, former president of the German industrialists' federation BDI, together with a number of ex-CDU activists.

However, since then Lucke and Henkel have left the party and publicly deploring its more recent shift to the right and the growing influence of racists, semi-fascists and fascist elements within the party. Thus it is no accident that Alexander Gauland, who was a major AfD figurehead in the election campaign, recently stated that Germany had a right to be “proud of its soldiers who fought in two world wars”.

Another split of the AfD seems to be developing now, as party chair Frauke Petry, who scored an individual 37 percent victory in her Saxonian constituency, announced on Monday morning (September 25) that she would not be joining the AfD´s parliamentary group in the Bundestag. There are rumours that she and other “moderates” and more “liberal” elements within the AfD, and who would wish to join a coalition government under the CDU/CSU leadership as soon as possible, are looking into the possibility of founding a new parliamentary group if they get enough support amongst the new MPs elected on the AfD ticket.

As a result of the new make-up of the parliament, there is no other option for Merkel but to try to cobble together a coalition with the FDP and the Greens. But her position has been weakened as CSU leader and Bavarian Prime Minister Horst Seehofer on election night called upon the CDU and CSU to shift to the right significantly.

The CSU systematically dominated Bavaria since the 1950s and was shocked this time round by its relatively low score of 38.8 per cent of the votes cast in their federal state. It will not be easy for Merkel to get the FDP and Greens to work together in harmony under her leadership, yet the Greens who in the 1980s were seen as a left-wing alternative have long since become a tame liberal party and are already in coalitions with the CDU in a number of cities and the important Western states of Baden-Württemberg and Hesse.

DIE LINKE (Left Party) achieved modest growth in absolute and relative terms, achieving 9.2 percent of the votes cast nationally. But the 4.3 million votes it won on Sunday only partly reflect the potential that exists for a fighting left alternative. In 2009 DIE LINKE had scored 5.1 million votes nationally.

A closer look at local and regional results, however, reveals that the party did badly in its former strongholds in the East where it is in three state governments together with the SPD and Greens and is therefore widely seen as part of the establishment. There was a lot of anger in the party when these Eastern governments, with the consent of DIE LINKE representatives, endorsed the policy of motorway privatisation in the Bundesrat (second chamber) in early June and this provoked a debate and sharp rebuke at the party conference two weeks later (see author´s speech at the June party conference in Hanover).

In the end, it was not the right wing of the party in the East, that would have favoured a coalition with the SPD and Greens nationally almost at any cost, but the more radical DIE LINKE sections in the West that secured gains and a slight increase nationally, thus saving the party’s reputation and prestige. Significantly, DIE LINKE advanced above all in the larger Western urban areas and scored two-digit results in major cities such as Hamburg, Bremen, Cologne, and Frankfurt – a sign of the beginning of a radicalisation to the left on the part of some of the more advanced sections. Although the slogans and posters of the party were a bit pale and did not present a clear anti-capitalist alternative, this increase in votes is an indication of the potential and the searching for a clear alternative on the part of workers and youth. In the election campaign thousands of predominantly younger people joined the party up and down the country. Spontaneous outbursts of protest against the AfD’s presence in the Bundestag will also encourage more young people to join the party in the coming days and weeks.

Same process as in the rest of Europe

Overall, the election results show that Germany cannot escape the processes that have affected the rest of Europe. There is an increasing polarisation and political fragmentation. There is a melting away of the traditional support for the two major traditional political blocs, the CDU/CSU and the SPD, who in the “good old days” of the old Federal Republic normally scored a sum of 80 to 90 percent of the votes cast between them, but have been reduced to an overall share of just over 53%.

The advance of the AfD has caused a lot of confusion and outrage among people who want to fight the extreme right wing. However, the best way to do this is not to moralise but to undermine the social basis of the AfD by advancing the class struggle and thus exposing the ultra-reactionary character of this right-wing party. There will be plenty of opportunities to do this. There will inevitably be movements in the workplaces over wages, working conditions and jobs, as well as movements against the shortage of affordable housing in major cities, while pensions for millions will be cut sharply.

If Die Linke, in these conditions wishes to play a role it can only be by moving to the left and advancing a bold revolutionary socialist programme, which would get a big echo among the workers and youth of Germany. The potential is there to transform Germany, which would inevitably lead to the transformation of the whole of Europe and the world.