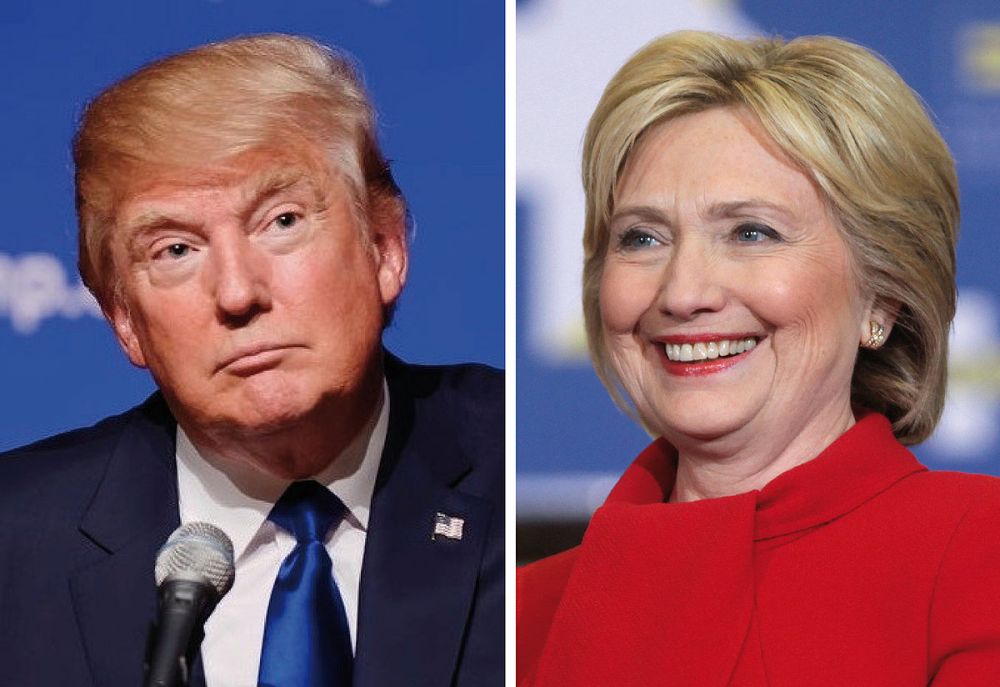 The champions of the free market never miss an opportunity to extol its virtues: peace, prosperity, efficiency, integrity, a wide range of freedoms, and let’s not forget: lots and lots of choices. If you work hard and play by the rules, you too can get ahead. However, far from the myth peddled by the free marketeers, capitalism is organically and incurably irrational, exploitative, and corrupt.

Editorial of the latest edition of Socialist Appeal (USA)

Take, for example, the findings of a recent inquiry into the US Department of Defense’s budget, which found that $6.5 trillion in spending cannot be accounted for. Although the law mandates annual audits for all federal agencies, not a single one has been conducted at the DoD in over twenty years. Or a new study by Oxfam, which found that for every dollar the top 50 US companies paid in federal taxes between 2008 and 2014, they received $27 in federal loans, loan guarantees, and bailouts. And in a desperate effort to stave off a repeat of the 2008 meltdown, the Obama administration has nearly doubled the federal debt, which has risen from $10.6 trillion to $19.4 trillion in just eight years. That’s a total of $60,000 for each and every US citizen. And what has this achieved? None of the fundamental causes of the crisis have been resolved, the 1% are richer than ever, and the next recession has only been postponed. This is the efficiency of the “free market” in all its glory.

As for “choice,” come November, Americans will get to “choose” which unpopular crook and liar will get to rule them on behalf of Wall Street for the next four years. This is not a choice. This is an undemocratic imposition by a political system set up and controlled by the two-party establishment in defense of capitalism. The fact that just 9% of the population voted for either Trump or Clinton in the primaries and caucuses sums up the rampant disaffection and alienation.

With the capitulation of Bernie Sanders, the wave of excitement for election 2016 has been smashed against the DNC machine. Long gone is the electricity that filled the air at his rallies across the country. Bitter as it was, his betrayal was a valuable learning experience. Millions of people have had their illusions in the Democrats burned out the hard way. Now, after voting for socialism and revolution, young people are told that not voting “against” Trump—by voting “for” the colorless, calculating Clinton—is tantamount to voting for The Donald. So much for freedom of choice. The pressure to support the lesser evil will only grow as we get closer to Election Day. The trouble is, many people can’t decide which candidate represents the greater evil! 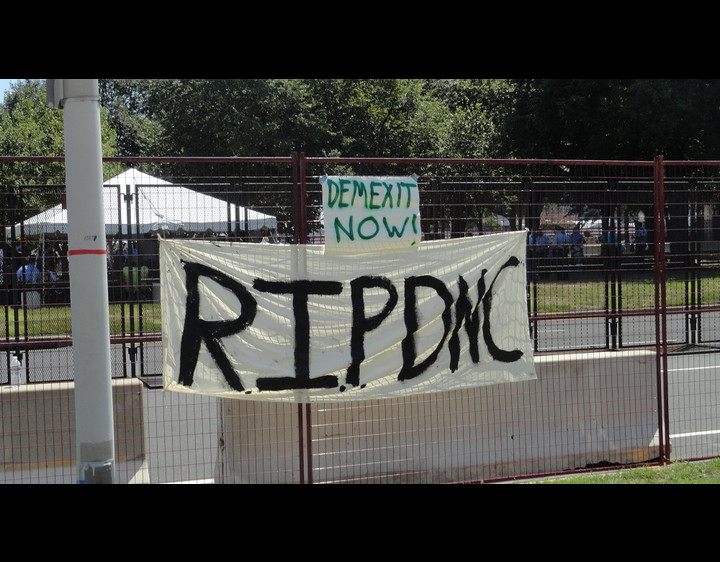 Photo: Socialist Appeal (USA)The decades-long stability of the two-party system was predicated on the relative economic stability of the postwar period. But turmoil in the economic base—the result of the forces of production rebelling against the artificial constraints of the “free market”—leads inevitably to political, ideological, and social convulsions. Trump’s call to “Make America Great,” and Clinton supporters’ coordinated nationalist chants of “USA! USA!” at the DNC, are an attempt to square the circle. Capitalism has exhausted its progressive potential, and the “good old days”—which weren’t quite so good for millions of Americans—can’t be simply willed back with a slogan or incantation.

What we are witnessing, in typically contradictory American fashion, is class polarization being expressed in an uneven and unfocused antiestablishment mood on both the right and the left. With no lead offered by the labor leaders, many Americans are willing to grasp at straws to find a way out of the crisis.

Trump has successfully rallied millions with his right-populist, anti-immigrant, racist shenanigans. However, this doesn’t mean Americans as a whole are shifting to the right. A recent survey found that “76% of American adults, including majorities of both Democrats and Republicans, think that undocumented immigrants are as honest and hard-working as US citizens.” A sizable majority also rejected Trump’s proposal for a border wall and his assertion that undocumented immigrants are more likely to commit serious crimes than citizens. His real base of support is the petty bourgeoisie—small business owners and farmers, in particular—who, sensing the decay and decline that surrounds them, want someone to “take charge” and guarantee stability in a world gone mad.

But as Trump’s campaign stumbles from one fiasco to another, the New York Times forecast gives him only a slim chance of winning. Some even speculate that he realizes he has gotten in over his head and is purposely short-circuiting his campaign. Nonetheless, given the many minefields Clinton must navigate before she can be sworn in as commander in chief, a Trump victory cannot be ruled out. We live in an epoch of sharp and sudden changes, and if Brexit can happen, Trump can be elected President of the United States.

With inspirational slogans from the Clinton camp like “crazy isn’t an option,” it’s little wonder that young people think the election is a “joke.” A recent article in the Washington Post forcefully hammered this point home. “Most of those interviewed shared a disgust with both Hillary Clinton and Donald Trump so intense that it is pushing many beyond disillusionment and toward apathy.” Voters are “embarrassed and ashamed that Clinton and Trump are the best the country has to offer.”

Other quotes by interviewees give a feel for the mood among so-called Millennials: “[The election] seems like it’s a prank, but it’s not a prank.” “I’m not going to vote. I’m just not. This is the first time I’ve felt that way. . . . A choice between two stones that’ll sink.” “I don’t see the point of the parties—just another way to divide us.” “You have a choice between a douche and a turd sandwich.” This is the reverence shown by the youth for the best candidates the system can come up with. 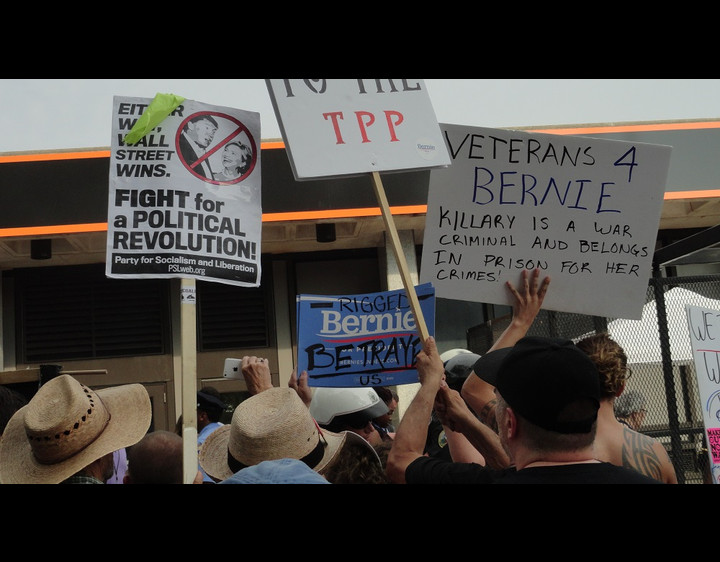 Photo: Socialist Appeal (USA)Capitalism can no longer develop the productive forces in any meaningful way for the majority. Its historic mission—building up the productive and technological basis for socialism—has been exhausted. The corollary to this is that political parties whose purpose is to perpetuate capitalist rule also have no reason to exist. Neither major party represents the working class. But for lack of an alternative, and with the help of the workers’ leaders, they were able to dupe people for many decades on the basis of the postwar boom. But the inertia of the past is ending. The two-party system is running on fumes, and even these are running out. The fact that a figure like Trump was able to vanquish his conservative rivals, and that Sanders came close to toppling the hand-picked candidate of big business, is ample proof of this. Even greater political upheavals are in store in the not too distant future.

The classical first sign of a brewing revolution is divisions in the ruling class, which can no longer agree on how best to rule. Election 2016 is a textbook expression of this. Frustration, anger, and malaise are seeping into every layer of American society. The next president of the US will likely be the most despised chief executive in modern history and can expect a short honeymoon. The next “leader of the free world” will be confronted by a world in chaos, an outraged population, and an economic crisis that is statistically all but inevitable in the next few months or years.

Something will eventually have to give—and it will give. A better world is not only materially possible but urgently needed. But for a socialist revolution to successfully overturn the old order, a perfect economic, social, and political storm will be necessary. History shows that the crucial component for such a convergence—and the only one we have a measure control over—is the presence of a revolutionary party with sufficient roots in the working class to have a decisive impact on events. The clouds of class conflict are gathering, and the winds of struggle are beginning to blow; we must prepare for the storm. Join the IMT and help us make this a reality.