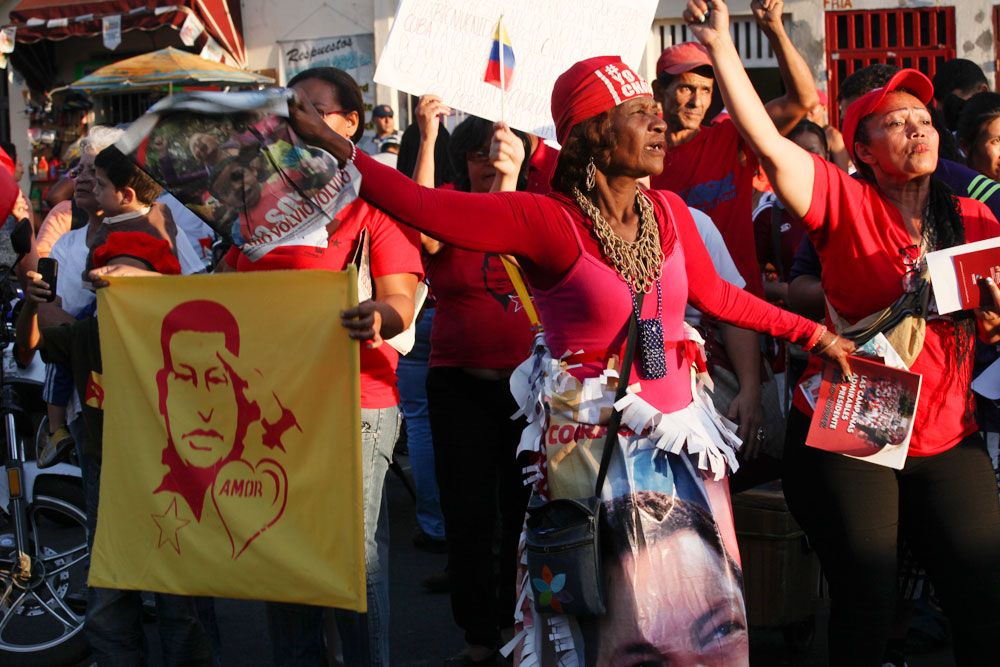 Yesterday the Venezuelan newspaper El Universal published an article, El chavismo según los chavistas, on the tasks facing the Bolivarian movement after the death of Chavez. They quote Alan Woods who explains that in order for the revolution not to be rolled back it must become irreversible. Here we provide the full, original text of the interview, with the questions posed by the El Universal journalist and Alan’s reply.

What is the future of socialism in Venezuela? Do you believe that Chavez's work will continue?

I hope and trust that the Bolivarian Movement will defend the revolutionary legacy of Chavez and carry out the Revolution to the end. Otherwise, it will face being thrown right back. I believe that these gains can only be guaranteed if the Revolution takes a bold step forward, to become truly irreversible. I am sure that this was what President Chavez was aiming to do, but was prevented from carrying out this plan by his untimely death.

The revolution has undoubtedly achieved many things for the people. At a time when in Britain and the whole of Europe governments are making deep cuts in spending on public health and education. Venezuela has established a system of free public healthcare reaching the poorest sections of society and massively expanded access to education at all levels. It has significantly reduced poverty and massively expanded access to housing.

To cite just one example, in Venezuela 350,000 homes were built and delivered in the last 2 years, while in Spain in the same period 350,000 families lost their homes through eviction because they could not pay the mortgage. In Spain there are now six million unemployed, including 58% of the youth, while in Venezuela it went down from 18% to 8% during Chavez’s presidency. Yet they talk about “economic crisis” in Venezuela! This stands the truth on its head.

In order to advance to socialism, you first have to break the economic power of the oligarchy that uses it to sabotage the revolutionary process. This means getting tough on economic sabotage, hoarding, the flight of capital and speculation. The only way to solve the economic problems is by nationalizing the land, the banks and the major industries under workers’ control.

What are the challenges facing "Chavismo" as a movement and the United Socialist Party of Venezuela as a party?

As soon as news of the President’s illness became public, voices were raised in Washington and in the Venezuelan opposition in favour of a “transition”, by which they meant the abandonment of the socialist aims of the Revolution and compromise with the bourgeoisie and the opposition. Chavez answered this, saying that the “only transition that is posed and must be accelerated is the transition from capitalism to socialism.” I agree with him. The Revolution must move to replace the old bourgeois state by new institutions based on democratic and revolutionary socialist workers' councils, community councils etc.

There are many challenges, both external and internal. The Revolution faces a constant campaign of sabotage by the oligarchy and imperialism, which refuses to recognize the democratic will of the majority that has been clearly expressed on numerous occasions. To meet these challenges serious measures will be necessary.

The forces that organized the 2002 coup, the bosses’ sabotage of 2002-03, the guarimbas in 2004, that introduced the Colombian paramilitaries, are the same forces that in the last two months have organized a campaign of nasty rumours, innuendo and speculation and hoarding. Nothing has changed.

But I see another equally serious greater danger. A few years ago, President Chavez said to me: “There are too many governors and mayors who, after they are elected, surround themselves with wealthy men and beautiful women and forget about the people.” He referred on more than one occasion to the counterrevolutionary bureaucracy. This exists and constitutes a kind of Fifth Column within the Revolution.

Unfortunately, inside the PSUV and the Bolivarian movement there are people in public office, governors, mayors, etc., who swear by Chavez in every other sentence, who wear red shirts but actually are opportunists, careerists, and corrupt bourgeois who have nothing to do with the revolution. These elements have been blocking the revolutionary initiative of the masses and even undermining the decrees of President Chavez.

The rank and file workers and peasants should take a big broom and sweep all this rubbish out of the Movement and take control. Until this is done, we cannot speak of genuine socialism in Venezuela.

At this time, how can we define "XXI Century Socialism" as a ideology?

I do not think that one can speak of XXI century socialism as something new and unique. The only thing one can say about this so-called XXI century socialism is that nobody has the slightest idea of what it is. It is an empty bottle, which can be filled with any content one likes. The problem is that this empty bottle has been filed by the bureaucracy with all kinds of reformist ideas about mixed economy, and the like. Chavez said quite correctly that the “third way” was a fraud.

Hugo Chavez played a very important role in reopening the debate on socialism at a time when many had written it off. I believe that the ideas of socialism or rather what I would call scientific socialism – Marxism – are essentially the same as in Marx’s day. The Communist Manifesto is a remarkably contemporary document, as even many bourgeois economists have been compelled to admit, particularly since the economic collapse of 2008.

It is true that in the XXI century this or that point would have to be modified, but what is amazing is how little needs to be changed. The president frequently recommended reading the works of Marx, Lenin and Trotsky. This was enormously positive.

What should be the role of the Venezuelan opposition in this moment? There are some sectors of this opposition that are really concerned about their own survival in these times.

I do not see why they should be concerned about survival. I think the Bolivarian revolution has been extraordinarily lenient with its opponents who, do not forget, organized an illegal coup against a democratically elected government in 2002. They seem to complain a lot about alleged ill treatment, but I see no basis for these complaints.

For years the pro-opposition media was allowed to slander the President in the most scandalous way, to call for his overthrow and even assassination. Do you think that would be permitted in the United States? RCTV and Globovisión played a very active role in organizing the 2002 coup. I can assure you that if any British television channel had done one tenth of the things they did, it would have its license withdrawn before it could say “David Cameron” and its owners would find themselves on trial under the Anti-Terrorist Laws.

They complain that the Presidential election has been called too soon. But if the government had not called elections, they would be complaining of dictatorship. It is in fact a Constitutional requirement that elections should be held within 30 days. Nobody has prevented the opposition from standing in elections. The problem is that they have lost. But that is democracy! The opposition, if it is to be truly democratic, must begin by respecting the will of the majority of the people and not to use its economic levers and control of the media to sabotage the democratic will of the people.

What was your relationship with President Chavez like? What would you highlight about him as a leader and comrade? And what anecdotes do you remember about him?

I knew Hugo Chavez for almost a decade, and had excellent relations with him from our first meeting in April 2004. He made a very deep impression on me, and he always referred warmly to me as his friend. He read my books and was kind enough to praise them and recommend them publicly on several occasions.

I could relate many anecdotes, but there is one that I particularly treasure. It was at the International Youth Festival in August 2005. I was invited to participate in a round table in Caracas, where the President spoke and gave a very radical speech, quoting from Marx, Trotsky and Rosa Luxemburg. At the end I shook his hand and congratulated him on his speech. He continued to grip my hand and said, looking me straight in the eyes: “No, only a few reflections on ideas that I have learned from you.”

Our relationship was therefore of a political and ideological nature. But the attempts of the opposition to describe me as his adviser and even his political “guru” were entirely false. They were an ill-concealed attempt to invent some kind of malign foreign influence on the President. In fact, it was not easy to influence President Chavez, who was a very intelligent and independent man, with a very strong will.

For my part, I admired and respected the President, who I saw as a very honest and courageous man and an outstanding leader. But a Revolution cannot depend on one man. Chavez knew that very well. When I accompanied him during an election campaign, he pointed to the crowds of enthusiastic people in red shirts cheering from the roadside. He turned to me and said: “These are the people who must take control of this Revolution.”

On the day of his death, these words kept ringing in my mind. Now that Hugo Chavez is no more, the future of the Bolivarian revolution and its advance toward socialism will depend on the workers, the poor, the peasants and the revolutionary youth who have been the driving force of the revolution and have defended it in all the key moments. Everything depends on this.