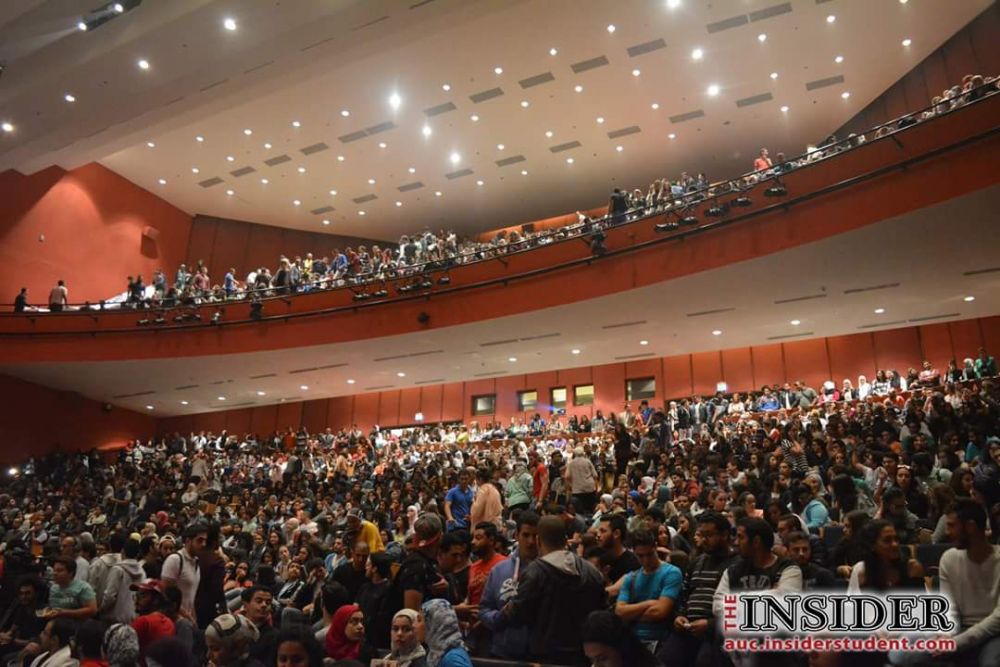 The economic crisis in Egypt is affecting all parts of society. The directors of the American University of Cairo and many other private universities have raised tuition fees to “cope” with the inflation. AUC fees have been raised by 40%. However, reflecting the general turbulence in society, the students have not accepted this.

Two weeks ago, the Egyptian government took the decision to float the Egyptian Pound. On the following day, AUC President Ricciardone, announced a meeting on campus to discuss tuition fees with the students. President Ricciardone announced that tuition fees will be raised by about 40%. The students immediately gathered around the administration building chanting and shouting slogans against the administration. The protests have been been ongoing until today.

AUC is the top private university in Egypt. As opposed to most public universities where the police regularly cracks down on protesters and human rights activists, AUC has always been granted a certain level of democratic liberties by the state - as long as the activities of students are not too “radical” and that they are kept within the walls of the university. In order to gain a better control over the political development on campus the university even introduced official campus “parties”. The most influential party currently led by Amr Khaled El Alfy is the Student Union, other parties are Black Party, Red party and Blue party.

Although, these parties were originally supported by the university administration to channel and monitor the students’ political activities in “safe channels”, these organisations have played a key role in organising the present strike. At this particular junction, they have all united for a common cause: To decrease the tuition fees. The Student Union with the help of the parties successfully gathered thousands of AUC’ians to join the movement. The Student Union communicates with students through Facebook with actions to take. From boycotting food outlets and parking tickets to causing disturbance to the administration.

The students have been protesting for two weeks. The momentum of the students in the strike have varied throughout the weeks. However, the students are determined to persuade the administration to reconsider.

On the second day of the strike, Ricciardone announced that the strike had already led to the “loss” of 1 million dollars in “unrecognized” profits - ie. the cost of damage done to the university’s brand. El Alfy mocked him for caring too much for his funds and not caring enough for the students and their parents who pay strenuous amounts money for a subpar education. El Alfy also commented on how bus services and food quality is constantly deteriorating and should be looked at. The Student Union has made several videos about the struggle, which have had significant reach.

The Student Union, did not just gather students for the strike, but also gathered AUC alumni, parents, professors and anyone sympathetic to the strike.

Formally, AUC is a private non-profit organization. According to International Accounting Standards (IAS) non-profit organizations should constantly inform stakeholders and shareholders of most cash flow and financial transactions. This isn’t the situation at AUC where the administration is refusing to share financial statements. This is raising many eyebrows in campus. Malak Rostom, current vice president of the AUC Student Union, said “the admin building closes its doors to the Student Union whenever they take decisions”. Even though it should be the opposite. Rostom is certain the administration is hiding extra funds or is trying its best to avoid revealing the real economic situation of the university.

The student’s have lost all trust in the administrations. This is not the first time the administration attempts to raise fees. In 2012, under Lisa Anderson’s presidency. Tuition fees were raised sharply, resulting in protest movement by the students. They barred the gates of university with vehicles and chains and prevented anyone from entering. In the view of many of the students, the administrators are using the university funds to manage their own personal affairs. Malak Rostom, said that during the transition between fall and spring semester 2015, the admins raised the tuition fees again.

AUC is an elite university attended mostly by the children of the Egyptian elite. What this movement reflects is the general turmoil in society which is affecting all layers. At the same time the economic crisis - which is the crisis in the history of the country -  is having a big effect on middle class layers who previously thought themselves immune to economic shocks.