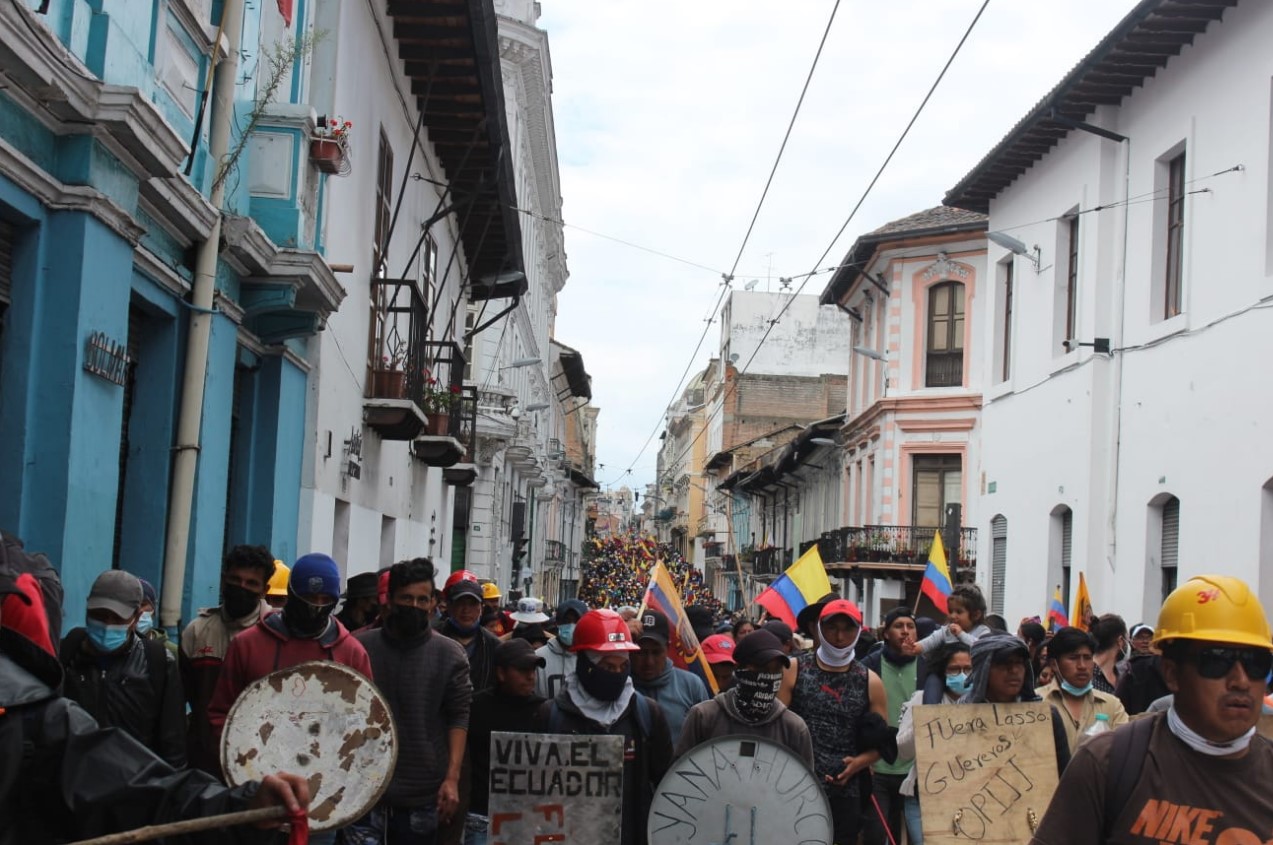 The great national strike called by CONAIE and other peasant-indigenous organisations in Ecuador ended on 30 June, after 18 days of struggle, with the signing of an agreement containing important concessions from the government. It is necessary to analyse this extraordinary movement, which faced brutal police repression, and draw the necessary lessons to continue moving forward.

The main points of the agreement (which can be read below), signed between the government and the leaders of CONAIE are: the suspension of the state of emergency; the reduction in the price of a gallon of gasoline and diesel by 15 cents; the prohibition of mining in protected areas and ancestral territories, as well as in archaeological and water protection zones; support the health system for immediate delivery of medicines and supplies to hospitals and health centres; raising the human development bonus from 50 to 55 dollars; a fertiliser subsidy; etc. 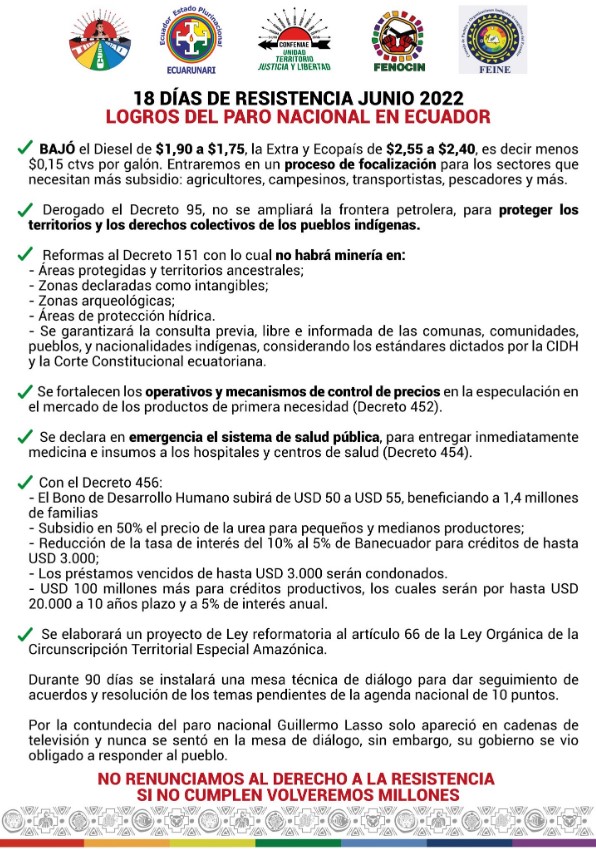 The main points of the agreement signed between the government and the leaders of CONAIE / Image: CONAIE

The agreement was only reached after the government initially broke off negotiations. Banker President Lasso had survived the motion of no confidence voted at the National Assembly on 28 June. The deputies of the right (BAN and PSC) joined together to save the president, who represents their class interests. Cynically, Lasso then issued again a decree of state of emergency, which he had lifted during the debate on the motion, in several provinces. Feeling stronger after the vote, he wanted to crush the movement through repression.

On the same day, the president announced the end of the dialogue with the mass organisations and dismissed CONAIE spokesperson Leonidas Iza as a legitimate interlocutor. The excuse? A confrontation on the night of 27 June between demonstrators and a fuel convoy, escorted by the army in the province of Sucumbíos, that left a soldier dead. Contrary to the government’s version of events, it was the soldiers who opened fire and provoked the confrontation.

However, despite Lasso's bravado, the government was not in a position of strength and was quickly forced to return to the negotiating table, although the president never participated directly in the talks.

The church, represented by the Episcopal Conference, came to the aid of the bourgeois state by convening a negotiating table, and will participate in monitoring the agreement and resolving pending issues through a so-called ‘technical table.’

There was a danger that the national strike would begin to show signs of fatigue, after 18 days of fighting, six dead and hundreds injured, not to mention thousands of people displaced to the capital from their provinces of origin. If the movement was not able to take a qualitative step forward, it could begin to go backwards and be forced to sign worse conditions or return home with nothing. On 30 June, the leadership decided to sign the Peace Act that included a substantial part of the 10 points of the national strike platform.

In these 18 days, the movement had to face the brutal repression of the state, which began by imprisoning its main leader, Leonidas Iza, on the first day. As noted, police and army repression left six protesters dead and hundreds injured. In addition, there was a campaign of criminalisation and racism against the movement by the media and the regime’s official spokesmen. But neither repression nor propaganda broke the national strike, which continued unabated and grew in strength as days passed.

The act that sealed the end of the strike contains important concessions to the movement. It can therefore be considered as a victory. A partial victory, but a victory nevertheless, unlike in October 2019. Leonidas Iza himself pointed out that the agreement left a “bittersweet taste” and that the deal was "certainly not on the terms we wanted."

But it is important to highlight that the conclusion that millions have drawn is that the struggle is useful and necessary. The strike has strengthened the structures of the mass movement, not only of the indigenous-peasant movement but also of the student youth and the working class and poor neighbourhoods of Quito.

Correctly, Leonidas Iza highlighted the class character of the movement, also in response to the racist attacks by the bourgeois media that accused them of being “Indian vandals”. He said: “This fight has no colour because it belongs to the runas [indigenous], to the whites, to the mestizos, to the cholos, to the montubios, to the Afros, to all of us who are screwed economically.”

Although the strike counted on the participation and support of thousands in the cities, and was massively supported by student youth, the organised working class was largely absent. The FUT trade union did not even issue a call for a workers’ general strike. That was a major weakness of the movement.

The national strike, like the one in October 2019, acquired some insurrectionary features, with the seizure of two regional governorships by the people, the destruction of several UPC police stations, etc., but perhaps these were not as advanced as had been in 2019. Unlike then, there was no attempt this time to install a People's Assembly as a body representing dual power.

This was another important limitation in the national strike strategy. The leadership did not have a revolutionary perspective and resisted with all its authority the slogan "Lasso out" that the masses in the streets chanted. They insisted that the struggle was not to overthrow the president but just exclusively for the 10 points in the strike demands. This attitude, of not raising the issue of power, provoked an angry response from the grassroots in some assemblies, and is also in contradiction with the general analysis that Leonidas Iza makes in his book "Rebelión" about October 2019.

However, the leadership of CONAIE and other organisations involved in the strike showed courage, faced repression, maintained the unity of the movement, and finally, above all, achieved an agreement that contained important concessions. Their authority and particularly that of Leonidas Iza, which represents the left wing of CONAIE, comes out of the national strike massively strengthened.

Leonidas Iza participated at all times in the assemblies at the Central University of Ecuador, in the House of Culture and without a doubt he was the main leader. On the eve of the agreement, he consulted the rank-and-file about what would be discussed at the negotiating table.

On the day of the signing of the agreement, when the columns of the national strike were withdrawing from Quito, there were many expressions of support for Leonidas Iza on the streets. He has become an important character in the political scene of Ecuador for the next period.

On the contrary, the right wing of the peasant-indigenous movement, represented by the parliamentary caucus of Pachakutik, wavered before the debate on the motion of muerte cruzada (which demands the removal of the President of the Republic, the dissolution of Congress and calls for new elections). They ultimately voted in favour under pressure from the base, but even so, two of them abstained. The right wing of the movement therefore comes out weakened and discredited.

President Guillermo Lasso, who entered the strike with a very low level of popularity, comes out even more weakened. This government was only elected because of the erroneous policy of the "ideological spoilt ballot" by Pachakutik-Conaie in the second round of the elections. It has no solid base in the population and does not have a parliamentary majority of its own. The problem for the ruling class is that for now this is the best they have.

The concessions contained in the document will not last long, swept away by the tide of the world capitalist crisis, aggravated in a dominated country like Ecuador. New attacks will be launched by a government that has no funds and is under the cosh of the IMF, preparing the conditions for a new movement of the masses. In addition to that, once the mobilised masses return to their provinces, the state will go on the offensive, criminalising the leaders of the movement. Iza himself is still facing charges.

Could more have been achieved?

The answer to the above is: yes and no. Under the given conditions (18 days of struggle, a certain erosion of the initiative, without a prospect of overthrowing the government and without the decisive participation of the working class in the cities) winning more would have been difficult.

What was missing? The decisive participation of the labour movement and a strategy of taking power on the part of the leadership. In his book Rebelión, Iza raises the need for an anti-capitalist strategy, to take power, and points out that this was one of the failures of the October rebellion. But in this movement that was also missing.

The peasant, indigenous and popular masses demonstrated the most enormous courage and willingness to fight which they have shown on countless occasions in the last decades. Once again, the need for a revolutionary leadership, with a clear strategy for the seizure of power, is confirmed. It is important to discuss the lessons of October 2019 and June 2022, to prepare for the new rebellions that are inevitably being prepared, in Ecuador and beyond its borders.