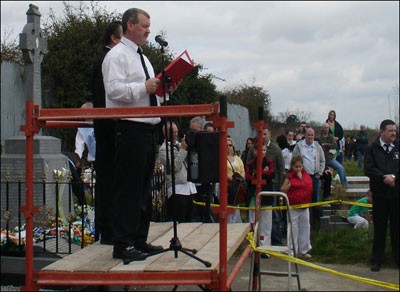 1916 may seem to be a relic of the past to some but the ideals that drove those revolutionaries, in particular the Irish Citizen Army are still held dear by our movement. We salute all of those who made sacrifices for the Socialist Republic, many of those are not able to join us here, their dedication sealed their fate.

The strength of this movement today is testament to all of our comrades' hard work but the struggle has just begun. Anti-Good Friday Agreement Republican organisations will soon find ourselves under the utmost scrutiny as we have already seen since the acceptance of the PSNI by the largest nationalist party. The PSNI are out to prove themselves. From this point in time, things can only prove to be more difficult. 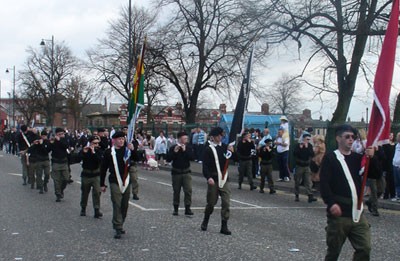 The Irish people have suffered much under the imperial yoke, too much to sit back and accept the very principle of the Unionist state and their veto. The Union is firmly cemented, the Good Friday Agreement contains no mechanism to grant Irish unity. The British leaving Crossmaglen is heralded as a great victory, what is not mentioned is that the British will maintain a permanent garrison here in Ireland. The number of troops permanently stationed here will be larger than the number of troops they used to invade Iraq.

It will be by the merit of our work and our effort to convince the working class of the virtue of our politics that represents the current struggle. The British, capitalist class and their armed defenders still remain the enemy but the methods have changed.

Anglo-American companies, encouraged by their own imperial governments are flooding this country with capital to pacify our people. They have succeeded to a large degree, but there will always be those who can never be purchased. Some of those who brought successive British governments from crisis to crisis are today in alliance with that same government.

They benefit from a capitalist Ireland and have the most to fear from a Socialist revolution, which occasionally they will dress up their politics as representing. Let us not be distracted, there is an unsurpassable margin between the careerist and the revolutionary.

Comrades, there is much more work to be done. Let it be embraced for us to move forward and develop this movement into a fortress built upon the foundations of the working class.