South Africa
Share
Tweet
Hosting the World Summit for Sustainable Development was an important test for the ANC government in South Africa. Since it came to power in 1994 the ANC government has pursued openly pro-capitalist policies. A growing protest movement has emerged, particularly from the poorest townships where residents are being cut off from water and electricity and evicted because they cannot pay their bills. 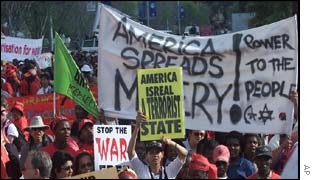 Hosting the World Summit for Sustainable Development was an important test for the ANC government in South Africa. Since it came to power in 1994 the ANC government has pursued openly pro-capitalist policies. Particularly since 1996 with the implementation of the misnamed Growth Employment and Redistribution programme, the country has been opened to foreign investment, public companies have been privatised and strict fiscal policies have been applied. The logical results of these policies have been more unemployment, casualisation of labour and the widespread disappointment of the millions of workers and poor who expected the ANC to deliver in areas like water and electricity supply, housing, etc.

A growing movement of protest has emerged, particularly from the poorest townships where residents are being cut off from water and electricity supply because they are too poor to pay their bills, and tenants are being evicted from their houses because they cannot pay their rent. Organisations like the Soweto Electricity Crisis Committee, the Concerned Citizens Forum in Durban, the Anti-Privatisation Forum in Johannesburg, the Western Cape Anti-Eviction Campaign, the Landless People's Movement, etc, have started to articulate the resistance against these measures, in many cases implemented directly by ANC-run councils and most of them the direct result of the ANC government's policies. There have been marches, protests, petitions, rallies and, more important, direct action to resist disconnection and evictions and direct action to reconnect residents to the water and electricity supply. 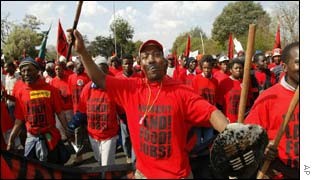 It is clear that the ANC government did not want the delegates at the WSSD (also known to activists as the W$$D) and the world public at large following reports of the summit, to know about these opposition to its policies, and therefore from the beginning resorted to the most brutal methods of repression to prevent protestors from being heard.

Weeks before the summit was due to start National Intelligence Agency officers were busy monitoring activists from different protest groups. Particular attention was paid to the plans of the Landless People's Movement, an organisation fighting for the rights of evicted farm tenants, landless peasants and also evicted urban squatters.

"They asked me what it is I want. I want to plough. How can they say they're having a summit on sustainable development? What development are they talking about?" said Mangaliso Khubeka, the LPM's National Organiser. "We don't have land. We see no sustainable development; people are hungry. We have no land or jobs." Mangaliso himself is one of the labour tenants who were evicted after generations on a farm in Ingogo, near Newcastle.

Although agriculture is a smaller portion of South Africa's economy, land is not a less important issue here than in Zimbabwe - more than 19-million rural landless people and 7 million urban landless need and want land for different purposes. The lack of progress on the question of the land after the end of apartheid is creating considerable anger. "Everyone is seeing what happened in Zimbabwe," said Solomons, whose farm-worker parents were evicted from a farm near Leeu-Gamka in Western Cape in 1997 after 33 years. "If they are not going to speed up the land reform process, the same thing is going to happen here." 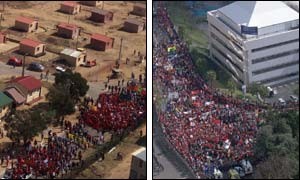 There had already been a number of cases in which dozens of demonstrators had been arrested by the South African Police Service (SAPS) for the simple "crime" of demonstrating. This was the case with the 87 Soweto Electricity Crisis Committee protestors arrested back in April. In the same month, 100 LPM members were arrested following a peaceful, legal march in Ermelo against farm evictions and demanding delivery of land reform. More recently 100 members of the Soldiers' Forum (which is part of the APF) were arrested in Johannesburg on August 17 when they were about to board a train to go to a protest outside Parliament in Cape Town. The Soldiers' Forum is an organisation of former South African National Defence Force and MK soldiers who have been sacked and are fighting for their right to a decent pension. Seventy-seven people were arrested on August 21 during a protest at Gauteng premier Mbhazima Shilowa's office. The demonstration by more than 3,000 people was to demand the end of apartheid-style evictions of landless people in and around Johannesburg, particularly in Thembalihle and Protea South in Soweto. Police attacked with batons and tear gas. Among those arrested were the leadership of the Landless Peoples' Movement and the National Land Committee. The intention was clearly to behead and cow the protest movement prior to the Earth Summit.

To protest against the increased repressive environment in the building up to the W$$D, some 700 people participated in a candle-lit march for Freedom of Expression starting at Wits University in Johannesburg on Saturday, August 24. The intention was to march to Johannesburg Central Prison where the Soldier's Forum and Landless People's Movement members were being kept. Because of their refusal to collaborate with the prison authorities the soldiers had been tear-gassed in their cells and many had broken fingers as a result of their refusal to be finger-printed. Without warning, police attacked the peaceful march, organised by the Social Movements Indaba (SMI) and International Forum on Globalisation (IFG), with concussion grenades. Tear gas and rubber bullets were also used. At least three marchers were injured and had to be taken to hospital.

The main protest march against the Sustainable Development Summit took place on August 31 and covered more than 10km between Alexandra and Sandton. The choice of route was deliberate. A red banner of the Landless People's Movement summed up some of the marchers' demands: "Land, Jobs and Food". The organisers, the SMI, the LPM and the international peasant organisation Via Campesina wanted to show the stark contrast between Alexandra, a poor township where more than 60% of the people are unemployed and Sandton, the richest suburb in Johannesburg, where the W$$D was taking place.

"What relationship do Alexandrans have with their rich neighbours? Sandton's financial firms, hotels and exclusive retail outlets draw in workers for long, low-paid shifts in the security, cleaning and clerical trades. Once they clock out, Alexandrans are quickly repelled from consumption due to high prices, blatant class hostility and intensive surveillance. They return to shacks and broken sewage systems. For many tens of thousands, a single yard watertap sometimes serving 40 families in overcrowded filth. Materially, nothing much here has changed since democracy arrived 1994, aside from new but tiny houses on the township's eastern hill, and a vicious slum-clearance and displacement programme along the filthy stream coursing through the slum."

Little has changed in Alexandra since the end of apartheid and little has changed in Sandton, the place where the commercial and business district of Johannesburg moved to together with the stock exchange. And it is precisely this lack of change that has created the anger that mobilised tens of thousands of people (40,000 according to the organisers and 20,000 according to the BBC) to protest against the summit despite the heavy police and army presence. The numbers present are particularly important if compared with the barely 4,000 people who attended a government-sponsored rally in Alexandra Stadium where Thabo Mbeki spoke. The divide between the ANC government and the masses of workers and the poor that put it in power was made clear when Essop Pahad tried to address the anti-W$$D march and the crowd refused to let him speak. Essop Pahad is Mbeki's minister of the presidency and was recently voted off the Communist Party's Central Committee by delegates angry at the capitalist policies of the ANC government.

Meanwhile, behind cement fences, razor wire and protected by thousands of heavily armed anti-riot police and army forces, the Earth Summit continued with the farce of pretending to discuss ways to alleviate the lot of the world's poor.

Unfortunately, this was not to be the end of repression. After the successful and peaceful march on Saturday, the police took its revenge on Monday, September 2. On this day, Israeli Foreign Minister, Shimon Peres, was scheduled to speak at Wits University Educational Campus. A number of Palestine Solidarity Campaign members (the PSC is also part of the SMI and had been active in the anti-W$$D protests) had made it to the meeting hall. Before the meeting started they were approached by security and police officers and violently expelled not only from the auditorium but from the university itself! A leading member of the PSC, Salim Vally, who is director of the Wits Education Policy Unit (EPU) and was on his way to a different meeting with a colleague of his, was also removed from the campus and when he protested he was arrested and sent to Hillbrow Police Station, charged with trespassing and resisting arrest.

The whole operation was conducted by the police in collaboration and following instructions from security officers from the Jewish Board of Deputies. An impromptu demonstration by several hundred PSC supporters was organised at the campus entrance. Again Jewish Board of Deputies personnel took over the security preventing any "suspicious" people from entering the campus. This was done in an overtly racist manner, since black people and those wearing scarves were singled out. This was so much the case that a white PSC supporter was inadvertently allowed in as there was no obvious way to identify her as a Palestinian supporter!

Then the police used water cannons, batons and pepper spray against the demonstrators. After a couple of hours the assembled protesters marched to Hillbrow Police Station to demand the release of Salim Vally. Again, as the march was reaching the station, police opened fire with rubber bullets and used water cannons. A statement of the PSC describes how "many demonstrators were cornered and beaten severely. A total of eighteen demonstrators were arrested." The statement continues saying that: "four other protestors were also severely injured. One was badly beaten up upon her arrest and police threatened her with rape. She, along with three others who had serious injuries, was released soon after so she could go to the hospital. A number of others were wounded with rubber bullets or as a result of being blasted by the water cannons." Amongst those injured is Ahmed Veriava, an executive committee member of the Freedom of Expression Institute, who was shot in the hand with a rubber bullet and only saved his finger after spending three days in hospital and undergoing reconstructive surgery.

The PSC statement also says that "for those of us that lived through the 1980s, this was a throwback to the days when apartheid police ruled our streets."

The protests against the W$$D are full of lessons, on the level of frustration and anger against the capitalist policies of the ANC government and the extent to which this is prepared to go in using repression against protestors. One thing is clear, repression did not stop the South African workers and poor from fighting against apartheid and will not stop them now fighting against a pro-capitalist government.

For more information on the protests and the repression, see South Africa Indymedia