Domitila Chungara was the daughter, and later wife, of a miner and a leader of the women in the mining community. She was arrested and tortured during the 1967 San Juan massacre, when the army opened fire on miners and their families, killing many and injuring even more, including women and children. She went on to become a symbol of the struggle against the military. Here we provide a comment by Darrall Cozens and an article by the comrades of El Militante-Bolivia. 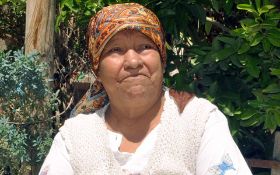 Domitila ChungaraThe name of Domitila Barrientos de Chungara does not trip easily off the tongue. It is also probable that many readers of this website all over the world have never heard of her. I was also in that position until I went to Bolivia in December of 2007 as part of a political tour of Latin America. By chance I stopped at a street bookstall in the capital La Paz and there was the book that was to have a deep influence on me.

In our struggle to bring an end to the horrors of capitalism we often use facts, figures and ideas to support our arguments for the need to create a new society where the full potential of every human being can be realised. At the end of the day, however, what we are trying to create is a society fit for human beings, a society that will guarantee the survival of the human species. That society for us is socialism.

In that struggle we come across comrades who are alive today and comrades who throughout history have sacrificed everything in the fight for socialism. Such a comrade was Domitila who died from cancer in Cochabamba, Bolivia, earlier this month at the age of 74.

Despite the phenomenal role that she played throughout her life as a social activist, a trade union leader and a revolutionary, she died in poverty on a reduced pension and without medical insurance. She was supported in her last years by help from old comrades in the struggle. Yet on her death the president of Bolivia, Evo Morales, announced that there would be three days of mourning for Domitila.

The experiences of her life of struggle can be found in her book “Si me permiten hablar….” (Let me speak!) – the testimony of Domitila, a woman from the mines of Bolivia. The book can be found in English and it is well worth reading.

Just one example of what she went through is what happened to her after the night of San Juan (24th June 1967). Even though she was eight months pregnant she had been in a mine with miners and many miners’ wives trying to escape the bullets of the military who had killed dozens of men and women in the mines of Catavi and Siglo XX. Domitila was arrested, beaten and kicked and thrown into a dark, damp cell with no food or water. Her baby was still born and Domitila suffered internal injuries that were to plague her for the rest of her life.

Read the book, learn about Domitila and if it does not stiffen your resolve to fight even harder to end the nightmares of capitalism, there is very little that will.

The translated article below was written by supporters of El Militante in Bolivia.

The Death of Domitila and the Victims of the Dictatorship

In the early hours of Tuesday March 13th Comrade Domitila Chungara left us. After her death those who fought for democracy set up a permanent vigil opposite the Ministry of Justice demanding an end to impunity from justice as well as justice for those who had fought and succeeded through their efforts in putting an end to dictatorships.

“We are dwarfs on the shoulders of giants”: our homage to the memory of Domitila arises from the solidarity we feel with a whole generation of fighters who through their self sacrifice made change possible.

The name of Domitila Chungara goes far beyond the frontiers of Bolivia. Her courage, her untiring struggle for fairness and justice in society, her fight against dictatorships and to organise the housewives in the mining areas in the northern part of the district of Potosi in Bolivia are echoed in the admiring words of writers such as Eduardo Galeano who remembers Domitila in the following manner,

“I remember a workers’ assembly in the mines of Bolivia not so long ago, about a little more than 30 years: a woman stood up amongst all those men and asked who our main enemy was. Voices were raised which gave the answer ‘Imperialism’, ‘The Oligarchy’, ‘The Bureaucracy’... And she, Domitila Chungara, explained in a clear manner: ‘No, Comrades. Our main enemy is the fear that we carry within us’. I had the good fortune to listen to her and I have never forgotten it.”

When she went to join in the hunger strike that began on December 28th 1978 in the Archbishopric of La Paz, the capital of Bolivia, by four miners’ wives with their children and priests such as Luis Espinal and Xavier Albo, Domitila had already spent more than two decades involved in struggle. Her testimony had been crucial in denouncing the massacre during San Juan, a massacre that was carried out during the dictatorship of Barrientos in the mines of Siglo XX and Catavi in 1967. Because of her role as a leader she had been kidnapped and tortured after the coup d’etat of Banzer in 1971. Her sufferings were so great that she lost her baby whilst in prison. But despite all of that she was again in 1973 at the head of a strike by housewives in the mine of Siglo XX who were demanding an increase in the rations that were available in the food stores.

In recognition of her role in all of these struggles, Domitila was called upon in 1975 to represent the women of Bolivia on the rostrum at a series of meetings organised by the UN in Mexico to celebrate International Women’s Year. Domitila correctly recognised that the question of gender equality was inextricably bound up with the struggle to put an end to class divisions within society. In a clear and lucid manner she recognised that,

Domitila’s feminism was the struggle of women who have nothing, who have not been educated nor have jobs that allow them some independence so that they can aspire to much better employment. Her feminism was that of a working class woman fighting to overcome prejudice, putting herself at the forefront of a struggle in order to gain not only her own emancipation but also that of all those who are oppressed and exploited.

Still persecuted by the dictatorship and having developed into a militant communist trade unionist, Domitila did not agree with the hunger strike as a method of struggle, according to what Luzmila Rojas de Pimentel remembers of her. Luzmila was one of the four women who towards the end of 1977 took up this form of exerting pressure. Nevertheless, Domitila’s class instinct enabled her to understand that given the conditions that existed in Bolivia at that time, the hunger strike was nothing more than an extension of the trade union struggles that had cost more than hundreds of dead and disappeared and the exile of many dozens of trade union and political leaders. Outside Bolivia too there were political assassinations and inside the country the massacre of peasants in places such as Tolata, Epizana and Sacaba, as well as an endless list of crimes, abuses, and torture that Domitla herself was also subjected to. She therefore supported that struggle by joining in the hunger strike and since that time she is remembered as one of the main people whose actions helped to bring about democracy in Bolivia.

The name of Domitila embodies the struggle of a whole people. Her strength always lay in the ability and clarity of her leadership and she put herself at the head of mass movements that fought against the dictatorships in Bolivia. It is for this very reason that her death unavoidably opens up still painful wounds in the hearts of all the victims of the dictatorships and in the memories of the Bolivian people.

There is neither justice nor pardon in oblivion. And while there is no justice there will neither be pardon nor peace of mind. In our history the only ones who have paid for their crimes against the Bolivian people have been the one time dictators Luis Garcia Meza and Arce Gomez, as well as the five military members of the High Command who were responsible for the massacres of October 2003, and who were condemned after an historic trial that came about as a result of the October Agenda.

However, there is still impunity in this country. The name of Marcelo Quiroga Santa Cruz has become the symbol of transparency, but we still do not know the whereabouts of his remains nor of those of dozens of activists like him. At the same time a deputy of Luis Arce Gomez, that is to say Manfred Reyes Villa, was able to stand as a candidate to be president of the country.

There are declassified documents in the US State Department that show that the coup of Hugo Banzer (1971) was promoted and financed by Imperialism with the bought and paid for help of Bolivian politicians and military personnel. Nevertheless, the declassification of these documents in 2009 did not give rise to any investigation by the Ministerio Publico (Attorney General). A ministerial decision of 2009 (0316) ordered the declassification of the military archives so that those responsible for the crimes of the dictatorships could be identified. The Armed Forces, however, have not allowed the public prosecutor to have access to these documents. They will hand over the documents but only in the strictest confidence where those that are handed over will not be declassified but will be purged of any information that might affect members of the military.

The name and the memory of Domitila will be respected when there is justice and an end to impunity. Covering up the silence and complicity within the high command of the military does not help to get rid of the dangers that arise from turning your back on what is happening and we can see evidence of this from the attitude adopted by the high command of the Armed Forces during the attempted coup by rich citizens in 2008. A people without a memory is a people without a future. The future of the revolutionary process also depends on its ability to resolve the claims for justice for the victims of the dictatorships.