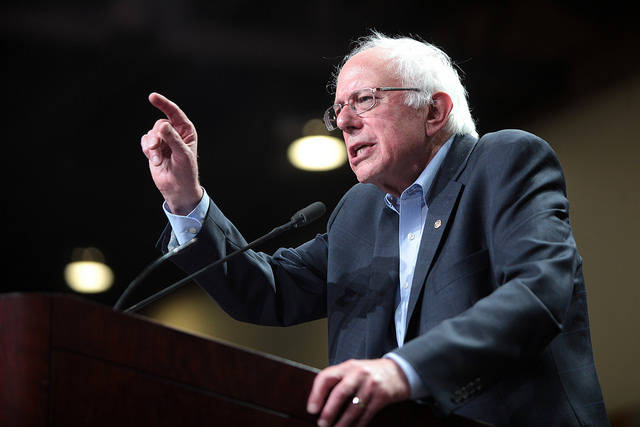 The daily twists and turns of life under the Trump regime have a way of making 2016 seem like a distant memory. But with the spectacle of Hillary Clinton joining #TheResistance, and FBI director James Comey's sudden dismissal by Trump, just days after testifying before the Senate Judiciary Committee over allegations that he may have influenced the election, all layers of society are doing some serious reflection on the caucuses and primaries, the election, and the road that led to this point.

Halfway through the Democratic National Convention last summer, the tag #DemExit began to appear on signs and banners all around Philadelphia, as throngs of Sanders supporters vowed once and for all to abandon the party that had stabbed their hero in the back. In the space of a single week, the way that millions perceived the Democrats was transformed. From one day to the next, hopeful speculation that Bernie would continue to resist and “had a trick up his sleeve” gave way to disappointment and disgust with the corrupt DNC apparatus. This was only compounded when WikiLeaks released the “Podesta emails” that prove the party leadership had conspired to “stick a knife in him.”

One of the most prominent chants yelled by protesters through the chain-link fences surrounding the DNC convention center as the delegates filed in that week was, “Only Bernie beats Trump!” Polls indicated that Sanders had much higher ratings and better odds against Trump than Clinton did. But at the moment of truth, Sanders wavered, solemnly lowered the banner of the “political revolution against the billionaire class,” and knelt before the Clintonites.

Meanwhile, the chants from outside continued to repeat the ominous warning: “Only Bernie beats Trump!” But ever since this proved correct on the night of November 8, Sanders has only tightened his embrace of the party. Instead of concluding that the Democrats cannot be a vehicle for working-class struggle, and using his authority to spur the creation of a mass socialist working-class party, Sanders has become one of its most tireless apologists.

Bernie’s journey from tragedy to farce recently took the form of a road trip through nine states together with the new DNC chair and former Labor Secretary, Tom Perez. Like all establishment politicians, Perez speaks only in the evasive language of meaningless banalities—that and a few words of embarrassingly broken Spanish. During the primaries, he personally assured the Clinton campaign he would “put a fork into” Sanders’ Latino support, and cynically encouraged Clinton to go after Sanders by casting him as the candidate of “angry white men” who was out of touch with minorities.

During the race for DNC chair, Bernie supported Keith Ellison against Perez. Widely seen as the “progressive” candidate, and an early supporter of the Sanders campaign, Ellison is among those who recognize the need for a leftward posture in the aftermath of 2016. But the Democrats chose Perez, and Sanders fell in line—again. 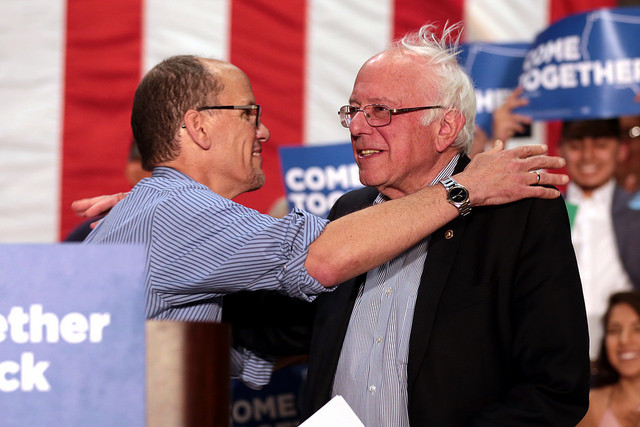 At almost every stop on the “unity tour,” Perez was met with boos, while Sanders was cheered enthusiastically. In one city after another, he allowed himself to act as a human sponge to soak up the discontent permeating the very party, which, as one attendee at a recent rally put it, “kinda shafted him.” While the tour itself was widely viewed as a failure and a further indication of a crisis of leadership within the party, Sanders himself continues to enjoy higher approval than any other politician, according to recent polls. Despite his ill-fated project to push the Democratic Party towards the socialist left, two main factors account for the enduring loyalty of Bernie’s base:

Firstly, it shows the powerful appeal of at least talking about class and socialism, if not class struggle and socialist revolution. Since 2008, the mass expressions of discontent in the US have had a spontaneous, leaderless, and politically vague form: Wisconsin, Occupy, and Black Lives Matter. Sanders became the personification of the mood in society when he stepped forward as shamelessly self-avowed socialist and advocate of a “political revolution against the billionaire class.” For this, he has won a degree of trust and respect that is alien to most bourgeois politicians.

This leads to the second factor: the vacuum. With no mass party or figurehead of prominence to the left of Sanders and the Democrats, and faced with near-daily attacks from the Trump administration, the urge for immediate action to fight back using whatever tools are presently on hand drowns out the need to first construct an effective tool. DNC operatives and the liberal bourgeois are cautiously following his every step and remark, asking themselves, “Can Sanders save the Democratic Party?” But what most concerns our class is whether Sanders will help or hamper the creation of a mass, socialist, working-class party. Building such a party is the most pressing task we face.

Given the vacuum and lack of alternatives, Sanders could still play a role in upending US politics. But he appears to have decisively answered the question, “what will Bernie do?” As long as he continues to work with the Democrats, he is helping to preserve the two-party system and the rule of capital. 2016 revealed the extent to which the two parties of capitalism have destroyed their legitimacy. The potential for the emergence of a new mass party that would radically transform the political landscape is closer than ever, but it must be based on a program of open class struggle against capitalism if it is to do more than simply let off steam.