Thursday evening, 200 protestors gathered in front of the Egyptian embassy in Denmark’s capital. The event was called by a coalition of groups, including Danish supporters of the IMT. The demands were for Denmark to sever all relations with the Mubarak regime and the other Arab dictatorships. The protestors condemned the bloody regime of Hosni Mubarak and hailed the great Arab revolution. 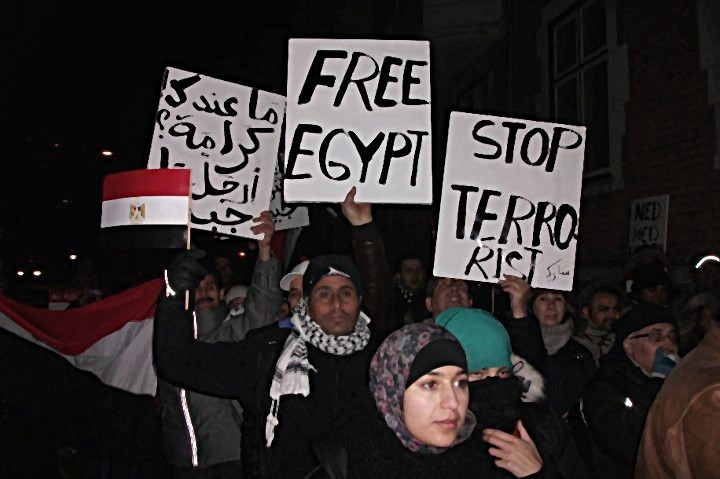 According to the police, 200 people took part in the protest. With the Tunisian flag waving in the air, the mood was one of internationalism and revolutionary solidarity. The protestors were both Danish and Arabs. A group of Iraqis brought a banner expressing solidarity with the revolutionary masses of Egypt from the people of Iraq. It was significant that the more radical speeches received the most applause. Also, a great respect and support for the Tunisian revolution was expressed.

A young Egyptian named Nadia thanked the organisers – PalUng (an organisation for Palestinian Youth), the Egyptian Network, Socialistisk Standpunkt (the Danish IMT supporters) and the Hands off Venezuela campaign. She condemned the regime of Hosni Mubarak and demanded his resignation. In her emotional speech she refused to acknowledge the politicians from the regime as legitimate representatives of the Egyptian people. Throughout, the speeches were interrupted by Arabic slogans. The most popular was “Yasqod, yasqod Hosni Mubarak!” – “Down, down Hosni Mubarak!”

An Egyptian man of the older generation entered the stage. He spoke in Arabic and said that the young generation – the shabab – is now carrying through the tasks that his own generation did not manage to do in the years of revolution under Gamal Abdel Nasser. He stressed the fact that the Arab people is one people and that the borders between the countries are completely artificial. Therefore, he said, the revolution is international.

Trine Mach, MP for SF (Socialist People’s Party) said that the Arab people has had enough of dictatorship, poverty and humiliations. She said that democracy is more than just a convenient alibi for right-wing politicians in their butchery of innocent people in Iraq and Afghanistan. She said that the Arab people are right in revolting and taking control of their own future. It was evident among the demonstrators that they welcomed a Danish politician siding with the revolution and not the capitalist dictators.

The mood got quite intense as a direct line to Tahrir Square was established. People listened carefully to the telephone that was held to the microphone. A young man described the feeling of revolution and the determination of the Egyptian masses who want to topple, smash and destroy the old regime. The reply was very enthusiastic.

Ali Nooshini spoke for The Marxist journal Socialistisk Standpunkt. In his speech, he described the life of Mohamed Bouazizi, the martyr form Tunisia. He described how poverty and humiliation is a generalised phenomenon for the masses in the entire Arab world and the Middle East. At the age of three, Bouazizi started to work to get money for the family. At the age of 10, he was the main supplier for his family. At the age of 19, he had to drop out of school to sell fruit and vegetables. The all-apparent police harassment hit Bouazizi hard. Just months before he torched himself, he received a fine amounting to two months’ wages. This was for the “crime” of selling without a permit in a country where everyone sells without a permit due to the corruption of the system.

Ali explained how the myth saying that the people themselves are not able to run society has been proven false by the revolution. In the areas of Tunisia and Egypt that are under the control of the popular committees, the level of crime has never been as low as now. All the “clever experts” that have run security and the economy have been proved to be utterly superfluous. Ali stressed that no trust can be placed in the “loyal opposition” and the professional politicians. The only force that can be trusted to carry out the fight to the end are the masses themselves. He said that a revolutionary constituent assembly must be based upon and convened by the popular committees in the neighbourhoods, the factories, universities, and the barracks and so on. He received a powerful cheer.

The event ended with revolutionary rap music by the artists Vakili, Tempo Bang and Zaki. A young man who came back from Egypt just three days ago insisted on giving an emotional greeting to the participants.

More demonstrations are planned. The Marxists are taking part in the solidarity with the Arab revolution. This Tuesday we will have a public meeting on the subject.

As these lines are being written, the revolutionary masses in Cairo are taking the initiative. The butcher president has declared that he intends to die on Egyptian soil. Without doubt, many Egyptians are hoping for this to occur much sooner than Mr. Mubarak has in mind.