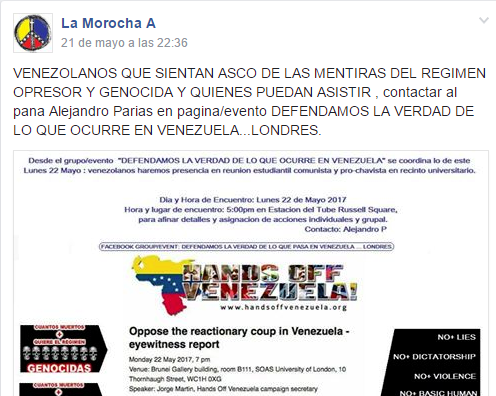 On Monday 22nd May a sizeable group of Venezuelan opposition supporters attempted to disrupt a solidarity meeting in London. Who are they and what did they want?

The meeting had been called by the Hands Off Venezuela campaign jointly with the Marxist Student Federation with the aim of hearing an eyewitness report from Jorge Martin, secretary of the HOV campaign who had just returned from Venezuela.

Soon after we arrived at the venue, half an hour before the announced starting time for the meeting, a group of Venezuelan opposition supporters arrived and sat down. They brought banners and signs and were clearly attempting to disrupt the meeting. We later found out that they had been organising for a week and had gathered before hand 5pm outside Russell Sq station) in order “to fine tune the details and assign individual and group actions”. They were outraged at a “pro-chavista and communist action” taking place.

They had even created a private Facebook group in order to coordinate their “intervention”. 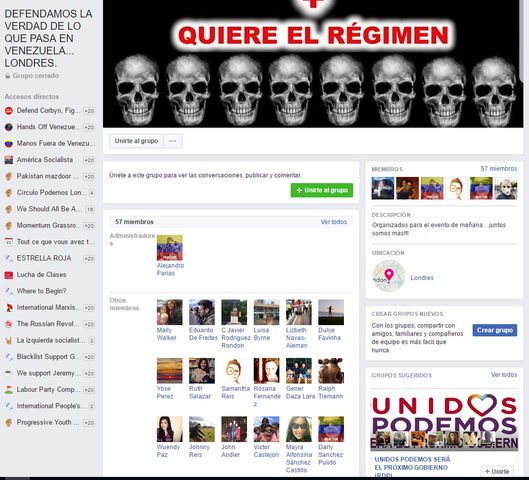 The group had been created by Alejandro Parias who announced it on a Venezuelans in the UK Facebook group.

Alejandro Parias  (who describes himself as a “Physiotherapist, P.T, and beauty therapist working with muscular re-education for celebrities&VIP”) is also mentioned as the contact person for coordinating the intervention at our meeting in several of the call outs which were circulated. He was certainly present at the meeting and was one of the people who led the attempt to disrupt the meeting. 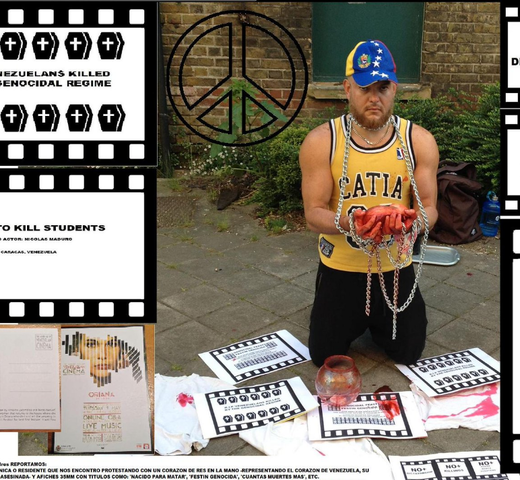 Very actively promoting the call to disrupt our meeting was the London branch of GANA Venezuela (Great National Alliance for the Rescue of Venezuela). GANA is a new Venezuelan opposition organisation created earlier this year which distinguishes itself from the main MUD opposition coalition by their rejection of all electoral tactics and their insistence that “the regime can only be overthrown” and their insistence that the army should intervene (that is, carry out a coup against the democratically elected government). They also insist in a policy of no dialogue with the government, claim to follow the dictates of Jesus Christ and one of their programmatic points is the “condemnation of communism and any other form of totalitarianism” as well as “the defence of private property and private business”. That is to say that within the reactionary nature of the Venezuelan opposition, they belong to its clerical, coup-plotting, rabidly anti-communist far right.

One of the founders and main figureheads of GANA is the journalist Nitu Pérez Osuna, formerly an anchor at Globovisión, who distinguished herself for insisting that Nicolás Maduro is in reality Colombian, not Venezuelan, and therefore is not even qualified to be president (a similar argument to the one used by the far right against Obama in the US). 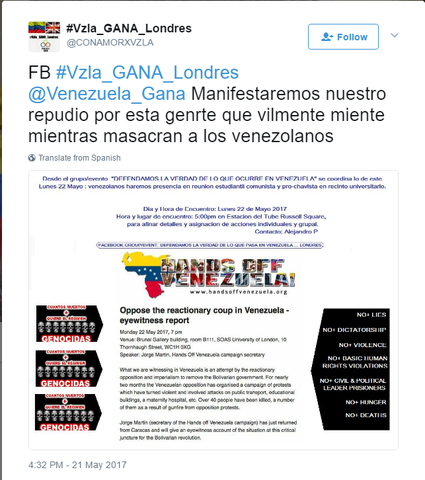 Not all Venezuelan oppositionists at the meeting belonged to this far right fringe, but clearly it was this group of people who can only be described (by their ideas and their actions) as fascists, who led and coordinated the attempt to shut down the meeting. Also present were representatives of Voluntad Popular as well as the coordinator of the MUD in London. Although some more normal opposition supporters might have been genuine ashamed of behaviour of these far right thugs, they never challenged them to drop their behaviour.

On several occasions they tried to interrupt the speaker, but the real nature of their ideas and intentions was revealed as soon as the question and answer part of the meeting started. They stood up in unison, put on scarves covering their faces and started to shout at the rest of the meeting, while very aggressively filming everyone present with their cell phones and GoPro cameras.

During the meeting they couldn’t keep quiet while other people were expressing their views and constantly interrupted other speakers, despite the fact that they were allowed to have their say. Despite one of them protesting they were not racists, they shouted racist abuse at a Bolivian comrade who spoke as well as taking exception to a Colombian comrade who also spoke in defence of the revolution.

Nico said a few truths to the face of Venezuelan escualidos attempting to disrupt the solidarity meeting pic.twitter.com/fmmjDIMHtW

Whenever they managed to make a point their class outlook came out very clearly. One of them complained that his father’s coffee factory had gone bankrupt because of the government price controls which didn’t allow them to make a profit and “create lots of jobs”. Another criticised the Venezuelan government’s social housing program which has built and delivered 1.6 million homes, because the people who had gotten them “didn’t own the homes”.

One of the points they stressed was “we are Venezuelans, you are not” and “there are no chavista Venezuelans in the room”. First of all, it is neither easy nor cheap to emigrate to the UK from Venezuela, something which is only possible for people with a certain amount of money at their disposal. That tells you something about the class divide between the opposition and the revolutionaries in Venezuela. However, there were a number of Venezuelan chavistas in the room, but they chose not to speak in the face of the threatening attitude of the opposition supporters. Given the current climate of violence and threats against supporters of the Bolivarian revolution, they were sensible not to identify themselves.

At the end of the meeting, instead of listening to the speaker attempt to reply the points made during the discussion, again they disrupted the proceedings, shouting, standing up, shoving their cameras into people's’ faces and left the room proffering various threats as well as allegations that we had been “paid to tell lies”.

One of the oppositionists most vocal in his threats when leaving the room was C. Javier Rodriguez Rondon, who lives in Brighton and Hove, and had already threatened violence before the meeting (“who knows anything about these rats, so I can beat them up myself”). 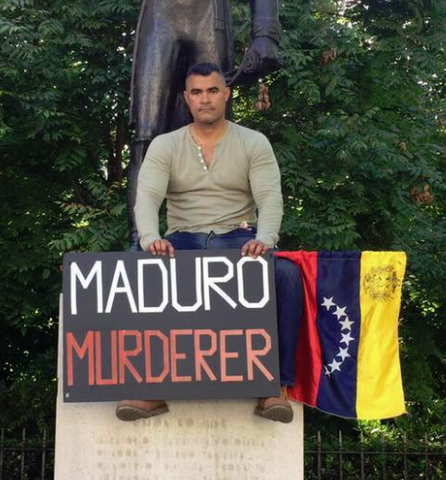 What became clear to anyone who attended the meeting was that these people did not come to the meeting just to tell “their truth” or to engage in a debate. Their intention was clearly to disrupt the meeting and prevent anyone else from expressing their points of view. What they clearly revealed was the undemocratic and reactionary nature of the Venezuelan opposition.

The attempt to disrupt the meeting in London is not an isolated event. Venezuelan opposition supporters have organised a lynch mob against chavistas abroad, publishing the names and addresses of supporters of the revolution, government and embassy officials as well as those of their children and relatives and encouraged opposition supporters “to get them”. In Madrid, a threatening mob of opposition supporters besieged a cultural building of the Venezuelan embassy where a solidarity meeting was taking place and did not allow anyone out (with threats of violence) for 5 hours. Once people were finally allowed out, some of them were followed, harassed and punched, as was the case with a Peruvian national. 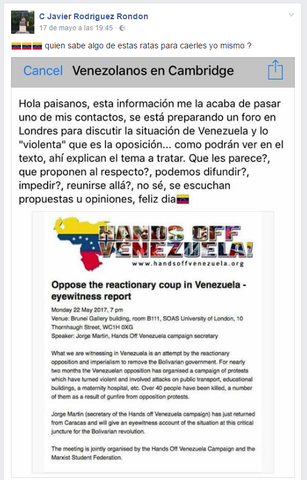 We will not be cowed. We will not change our commitment to defend the Bolivarian revolution just because a few far right thugs attempt to shut us down. We will mobilise the full power of the organised labour movement, the solidarity movement and the democratic and progressive public opinion to defend our right to express our ideas and prevent our meetings from being disrupted by fascist thugs.