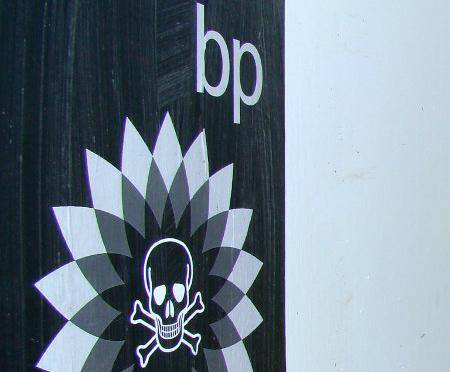 The huge spillage of oil in the Gulf of Mexico was an accident waiting to happen, as this brief comment from an ex-oil worker points out. It shows quite clearly that our environment cannot be left in the hands of a greedy, money-grabbing coterie of capitalists who own and control the means of production.

The Deepwater Horizon explosion and oil spillage is no surprise to anyone who worked for BP or its suppliers during the last 20 years. There has been round after round of cost cutting and job losses to the point where it is surprising that it took this long before a major accident.

In fact it didn't take 20 years - it was five years ago that BP's Texas City refinery blew up. But this was a "minor" tragedy 15 killed and 170 injured with employees (mainly Mexican migrant workers) working 12-hour shifts for 30 days on end, living quarters next to hazardous plant. And nothing has changed there either:

"The Occupational Safety and Health Authority today announced that it had since issued 270 notifications to BP for failure to correct hazards and that it had found 439 new ‘willful violations’.” (Guardian newspaper, 30 October 2009)

Starting in the late 1980s and the early 1990s, as part of the Thatcherite attacks on jobs and living standards, BP management began the process of dismantling its technical teams. (Forget the glossy green ads on the TV - a complete con.) Half the people I knew working on the exploration side lost their jobs over the next 10 years. Many others got out if they could before they were pushed out. World-class research teams were wrecked. The idea was that in future BP would contract in technical expertise as it was needed.

What BP management forgot was that if you contract in services you need somebody in the company who understands what you are buying. If you don't have that you will be served up rubbish. It was a standing joke when I worked for a services contractor that if it was a BP job (a) there’d be trouble, because they didn't know what they were talking about, and (b) you could get away with just about anything.

This is just a reflection of the short term approach and the lack of investment there's been in British manufacturing industry for decades. The management of the American oil companies, brutal and arrogant as they are, didn't go quite as far, and at least maintained for a while some tradition of investing for the future. Even so, all of the oil companies over the last 20 years have operated as a gigantic cartel when it comes to dealing with their suppliers and have driven down prices - like the supermarkets driving down prices for their suppliers.

Prices for some exploration services have collapsed to 1/10 of what they were 20 years ago. Service companies have scrambled to invest in automation, in bigger computers, bigger survey vessels etc, to try to survive. This has created dramatic overcapacity in some sectors and driven prices down even further. During the last 20 years there has been a boom-slump cycle in some of the service industries of about 5 years, with employment halving during the slump and then never quite doubling back to previous levels during the next boom. In fact the number of jobs overall in exploration services has halved over the last 20 years. All of this has contributed to a general lowering of standards throughout the industry as a whole. Workers with experience go out of the door, and they don't come back.

Then added to this is the corruption at every level. We used to joke that you could remove 4 out of every 5 managers and nothing would change. In fact things would improve. The infighting, the stupid decisions, the political games, the backhanders, the share options, the bonuses, the dodgy accounting, the takeover deals, anything but run the blasted company. I could write a book but they'd never let me get away with it. I lost good friends who saw things they shouldn't or talked too much and got kicked out. Pay them off and they won't bother with the industrial tribunal. Anyway, they want another job in this business, don't they? Believe me, it's not only under Stalinism that you have a corrupt and vicious bureaucracy.

So now we have the Gulf of Mexico poisoned and lifeless. It was only a matter of time. You could take this one incident and there in a nutshell is every reason why capitalism is a dead-end and must go. The profiteering, the lack of investment, the short-termism, the corruption, the lives wrecked.

We used to think that deserts were dry places with very little life. Now we have one under the sea.