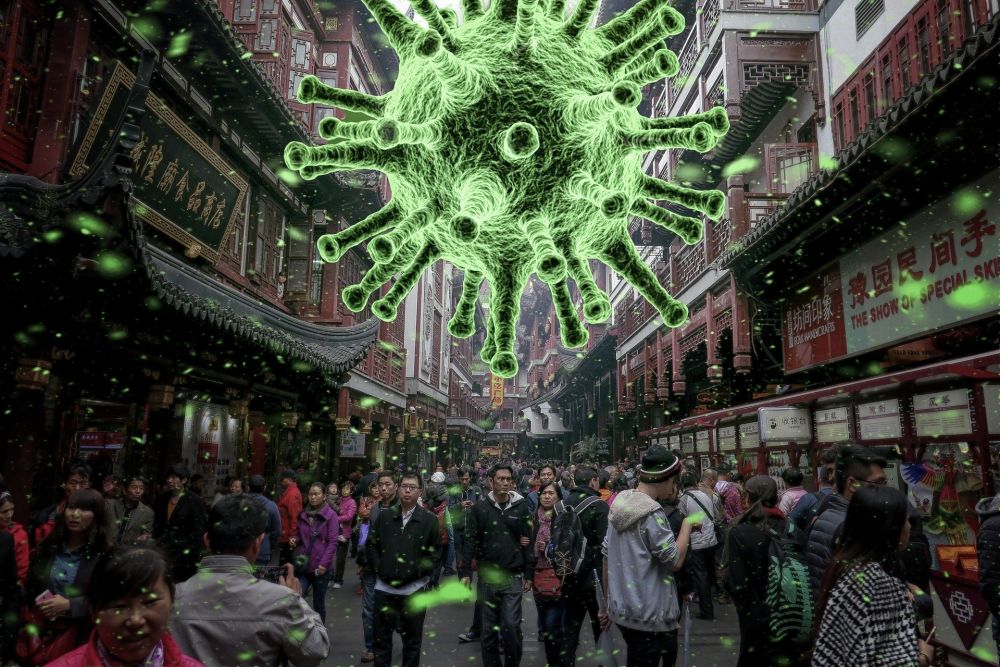 In the depths of the 2008 crisis, Beijing rescued world capitalism. The fiscal stimulus they carried out was the largest in world history, at over £500bn. Had it not been for this stimulus, and the global demand it created for raw materials and other goods China needed as a result, the financial crisis would have been an all-out depression. The crisis unfolding before our eyes is far more serious than that of ten years ago. Yet this time, China will not be able to rescue the world, let alone its own economy.

Only five days ago, economists were forecasting that Chinese first quarter annualised growth would be between -2 percent and -6.5 percent. Today, UBS has announced it expects annualised growth this quarter to be as much as -30 percent!

Beijing has already reported that export growth fell from 7.9 percent year on year in December 2019, to -17.2 percent in February. These figures probably significantly understate the collapse in production, because it is likely that exporters simply ran down their stock inventories whilst workers were self-isolating, thus production may have been significantly lower than export figures would suggest. In fact, exporters were building up larger-than-usual inventories as a result of the uncertainty produced by Trump’s trade war, so the gap may be bigger still.

Regardless of whether or not China manages to ‘go back to normal’ soon, its exports will remain in a deep slump. In order to export, one needs someone to import. But the rest of the world, especially Europe and the US, China’s largest markets, are just entering a prolonged lockdown, a situation compounded by the economic crisis this lockdown has caused. This crisis will have long-lasting, severe effects. It is clear then that China’s exports will remain depressed for years.

Urban unemployment officially reached 6.2 percent in February, the most the government has ever admitted to. The Financial Times writes that:

“According to a China Merchants Bank index that uses satellite imagery to track night-time activity, as of Monday [9th March] just under 60 per cent of 143 major industry sites across the country had resumed operations. G7 Networks, a start-up that collects GPS data from about 20 per cent of China’s cargo vehicles, has been releasing a daily tally that shows a rapid recovery in full-truck deliveries usually made by major companies, but only a gradual uptick for shared consignment shipments, which tend to be used by smaller businesses. Compared with early February when this data looked “extremely bleak”, big deliveries to factories and construction sites have rebounded to about 60 per cent of peak November levels. But smaller shipments are only running at about 26 per cent “not because there are no drivers, but because there are no orders”, says Sun Fangyuan, a G7 market director”. (Financial Times, 10.3.20)

In the midst of this escalating crisis, it is revealed that the means by which China overcame 2008’s crisis, the fiscal stimulus, have simply paved the way for a more extensive and destructive crisis today, “by diminishing the means whereby [future] crises are prevented” to quote the Communist Manifesto.

The splurge of debt created by that fiscal stimulus is inhibiting today’s efforts. Whilst the Chinese government is offering cheap loans, the total new lending capacity announced this week was only $78bn. Compare this to the US Fed pumping trillions into the banking system this week. Chen Yulu, the deputy governor of the People’s Bank of China, told the Financial Times that the central bank intended to maintain “normal monetary policy”, signalling it would “avoid introducing negative rates.” (Financial Times, 18.3.20)

The expectation is that a stimulus will follow when the economy finally leaves lockdown (whenever that is), but that this will be much lower than in 2008. Why?

Total debt in China is around 310 percent of GDP. Before the 2008 stimulus, it was half that. This is a global problem – China accounts for 80 percent of the growth in emerging market debt since 2008. 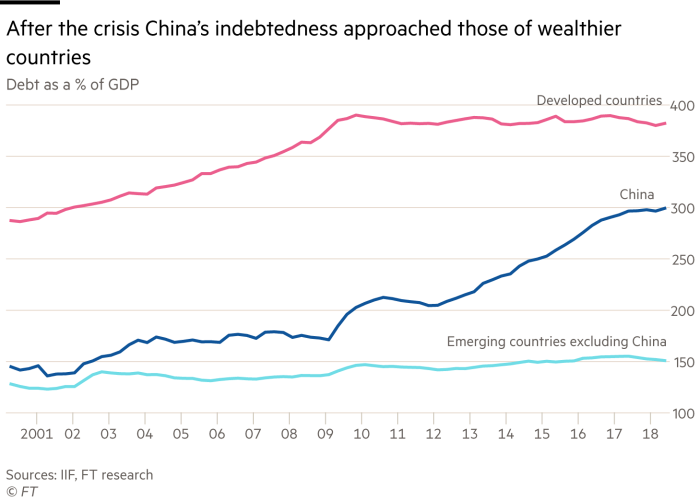 2008’s stimulus may have kept the economy growing, but it laid the basis for the depth of the coming crisis. It was delivered not with the socialist method of planning to meet need, but with the capitalist methods of speculation and credit. It was achieved by China’s state-owned banks lending money to local governments and others to spend on infrastructure projects, mainly. As a result, bad debts have ballooned. According to Reuters in 2019, “Officially, non-performing loans at China’s commercial banks total around 1.5 trillion yuan. But some analysts say the bad debt is as much as 14-times higher, because lenders use various methods to conceal the true figure.”

Any new fiscal stimulus big enough to rescue the world economy would have to be far bigger than in 2008. But China’s financial system is already clogged up with non-performing loans, and another huge stimulus would only add to this mountain of bad debts.

Moreover, the main channel for 2008’s fiscal stimulus was the property sector. Since 2008, local governments have borrowed vast sums from China’s state banks to fund infrastructure projects. This was how the stimulus was carried out. But Chinese law bars them from paying off these debts through taxation. Instead, they have funded themselves by selling off public land (usually illegally forcing peasants from it first). In 2018, Chinese local governments raised almost 40 per cent of their total revenues from land sales.

A house of cards

Their shaky finances have therefore come to depend on an ever-rising property market and land prices. Should these fall, a wave of defaults of Chinese local governments, and then banks, could break out. China would be the epicentre of the new financial crisis.

The present crisis may be bringing just such a collapse in the Chinese property market to a head. “House sales across China’s 30 largest cities fell more than 80 per cent in the first three weeks of February compared with the same period last year… Land sales are now running at less than a quarter of average levels” (Financial Times, 10.3.20)

Property ownership in China is already very high. 90 percent of Chinese households own at least one property; 35 percent own two or more. There was very little scope for the Chinese property bubble to keep inflating even before this crisis. It is impossible to see how it can keep doing so now.

This explains China’s inability to pull the world back from the brink of a depression this time. None of the contradictions of the 2008 crisis have been resolved. World debt levels are higher than they were in 2007-8. Added to this is the breakdown in world relations. Rather than stepping in as the new leader of globalisation and leading the world out of this crisis, China is indulging in conspiracy theories about the coronavirus emanating from the US military. There will be no escaping this crisis, anywhere in the world. There is no way out on the basis of capitalism, as China is now discovering. Only the planning of the economy through the public ownership of the means of production can lead us out of this crisis.