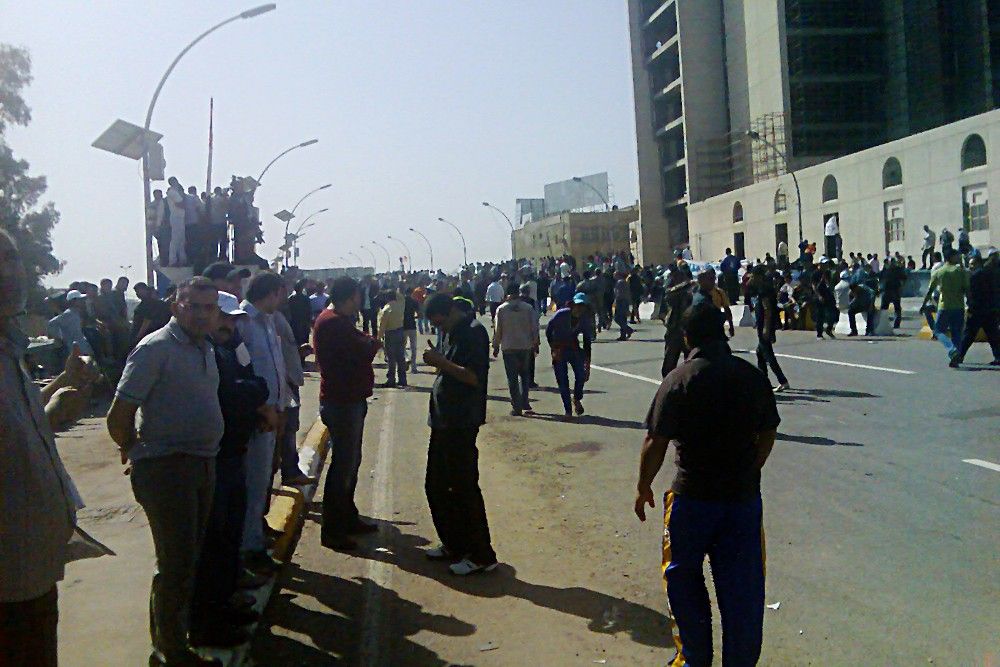 Last Friday was Iraq’s Day of Rage, where 70,000 came out on the streets in cities all over the country. Here we publish an account of what happened, that was sent to us by the president of the OWFI, the Organization of Women's Freedom in Iraq.

Last Friday, February 25, was a historic day in Iraq. The revolutionary earthquakes in Egypt, Tunisia, and Libya sent shockwaves in our direction. The main squares of most Iraqi cities were filled with protestors raising same demands on providing electricity, employment, an end to government corruption, and a plea for general freedoms.

Although the government announced a curfew and closed all streets to vehicular movement, and the highest religious clerics discouraged the people from protesting, almost 70,000 people gathered in the main squares all over Iraq, united around their main demands.

For the first time in eight years, the demonstration united people of different religions, ethnicities, sects, and political affiliations to denounce the extreme and continuous corruption and demand a share for the people in the countries oil resources.

The OWFI (Organization of Women's Freedom in Iraq) plays a role in the political participation of women within movements for national freedoms and liberties in Iraq. Although our numbers are small when compared to the huge demonstrating masses, the purpose was to help organize some of the freedom-loving youth groups which had started from facebook, but grew and multiplied in February. OWFI was one of the organizers of the demonstrations in Baghdad and Samarra raising slogans of change, the right to work, and of course, equality.

Although the demo was announced as a peaceful one, the security forces ended it at 5pm by throwing sound bombs, spraying hot water, shooting plastic bullets, and live bullets at the demonstrators.

When we would not move, but chanted slogans of relentless struggle, the security trucks began to drive down the square to chase and shoot us with live bullets, and beat up many of the demonstrators who fled into the alleys surrounding Al Tahrir square. One of our male supporters was shot in the knee, while two others were beaten by the US-trained anti-riot police and the Iraqi army. Almost 20 people were shot on that day around the square, although the officially announced numbers were much less. Some died while the wounded were detained.

For those of us who ran to safety, we had to walk five hours in order to reach our homes in streets where cars were not allowed to drive.

In the western city of Samarra, OWFI women and men were leading the demonstrators, and raising banners demanding support for the widows who are a majority among the women of Samarra. It was unprecedented for a tribal community protest to be led by women.

Demonstrations took place in parallel in the Kurdish North and the South, making it clear that nobody cared for the artificially created division lines of Sunni, Shia, Arab, Kurd, Turkmen, etc… It was a day of a unified struggle against corruption, oppression, basic rights and freedoms.

While most demonstrating groups carried banners demanding reform of the government, the shooting and harassment of the demonstrators by anti-riot police and by the army shifted the slogans toward ones which rejected the oppressive measures.

The OWFI had carried the banner of "change" since the beginning of the demonstration, and advised groups of cooperating youth demonstrators to do the same. The opposition media picked up the slogan and announced on local TV channels: "…that OWFI activist Yanar Mohammed will demand (Change) in the coming demonstration next Friday."

We are organizing for this coming Friday [March 4], hoping that the streets will be open, and that the army will let us into Al Tahrir square 30 hours from now.

Note: please take a look at the short video clips we took of the demonstration before the shooting. We were still smiling as the shooting had not begun.