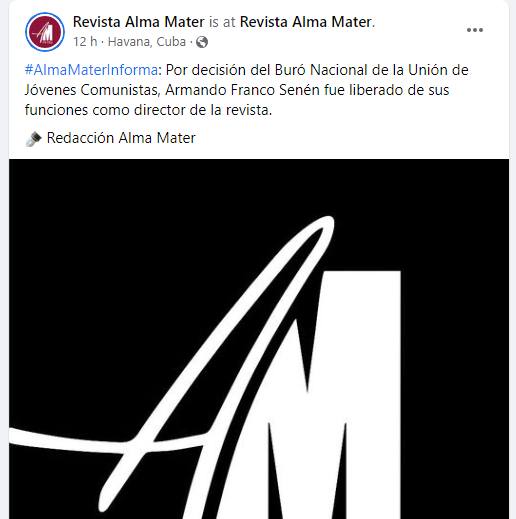 In the early afternoon of 26 April, it was reported that the director of the Cuban student magazine Alma Mater had been dismissed. The decision has caused a huge stir on the island, on social media and beyond.

The note, which was very brief, barely 23 words, said:

“By decision of the National Bureau of the Union of Young Communists, Armando Franco Senén was released from his duties as director of the magazine.”

The reason for the uproar is because the decision has been universally interpreted as censorship of the political-editorial line of the editorial staff, presided over by Armando Franco Senén.

From a formal point of view, the decision could not have been taken in a worse way. The magazine Alma Mater (founded in 1922 by Julio Antonio Mella) is the magazine of the Federation of University Students (FEU), but the decision was taken by the Bureau of the Union of Young Communist Students of Cuba, as if it was meant as a reminder that nothing is done without the permission of the higher authorities.*

The note informing of the decision does not state the reason for the decision. It does not even attempt to offer a justification. Nor does it attempt to explain whether the decision was mutually agreed. This opacity is not accidental. It wants to send a clear message: the bureaucracy rules, whoever steps out of line has to accept the consequences. In fact, we could ask ourselves: would we even know about the dismissal had it not been because of the editorial board’s decision to publish this short note on the magazine’s social media?

Some have taken to social media to call for caution. We should not be too hasty, we cannot comment, let alone criticise without knowing the reasons, they say. Fine, but the question is: who is responsible for the reasons not being known? The answer is clear: those who took the decision, but decided not to inform anyone of the reasons. In this case, the National Bureau of the UJC.

Given this lack of explanation, it is normal, justified I would say, to interpret the dismissal (and this is what it is, despite the use of the euphemism ‘release’) of Armando Franco Senén as a political reprisal against the editorial line of the magazine he edited until yesterday.

Alma Mater is a magazine aimed at Cuban youth, particularly student youth. In order to reach its potential audience, the magazine had adopted a light-hearted style and in some respects was even critical of officialdom.

A few examples. In the January 2021 issue, after the events of the 27N sit-in and the Tángana de Trillo, Alma Mater asked several young people how they saw 2021. Among the answers were these sharp observations (our emphasis):

“I prefer to think of 2021 as the year of attempts. A time when critical optimism prevails over the dogmatic norm, in the face of the flat solutions offered by ideological bureaucratism, that will function as a bridge for dialogue, and in the process we will achieve the re-connection, the theoretical and practical deepening of Cuban socialism, always starting from the expectations of our people.” (Yosvani Montano)

“On the other hand, there has been a lot of talk about socialist democracy and its deepening. But little has been linked to a process that will soon be upon us: entrepreneurial self-employment. In a social scenario in which enterprises will be more autonomous in their decisions, what degree of participation will workers have in making these decisions? Workers' democracy and labour democracy will be a key element in the deepening and maintenance of socialism in Cuba”. (Iramís Rosique)

The same issue of the magazine published a very sharp article by Fabio E. Fernandez Batista in which, among other things, he said:

“Different projects of nationhood are being modelled from different positions. Some are anchored in platforms openly connected to great power interests that cannot stand us. Others outline, generally with beautiful words, the paths to capitalist restoration that would lead us to dependence. We are faced with two responses to these two projections. The one anchored to a conservative understanding of socialism and the other that understands that only with the renewal of the project will it be possible to overcome the current challenges. It is worth clarifying, from the outset, that I am constructing this text on the basis of support for the latter.

“This new way of doing politics in Cuba involves overcoming closed and dogmatic versions of socialism that still hold important positions of power. A bureaucratised, inefficient, conformist structure, accustomed to monologue, cannot command the battle that is being fought today. Fear of reforming our socialism play into the hands of external aggression, creating conditions for the advance of the driving forces of capitalism and failing the people. Specifically, it is urgent to break with the inertia of the mainstream media, which is used to responding late and fighting back. To fail in the realm of media is to hand over the house keys to the enemy.

“The defeat of stagnant socialism has to be connected with the strengthening of those currents that advocate rejuvenated ways to reach the goal of emancipation conceived of in the guidelines of Marxism. Today in Cuba there coexist tendencies that are representative of this different way of approaching the construction of an anti-capitalist project. They are within the official institutions, but above all in various spheres of civil society”. (Coordenadas para hoy, Fabio E. Fernández Batista, Alma Mater 592, Enero - Febrero - Marzo 2021)

Alma Mater journalists were on the streets during the protests and counter-protests of 11J, and one of them was even arrested. The magazine made an attempt to report on and analyse what had happened and published an extensive report with five young Cubans about the events. In it, they expressed critical and diverse opinions about the events, with a discussion of the motives that caused them, the actions of the police, etc.

The magazine's editorial staff was concerned about the fate of the students who had been arrested and even interviewed several of them in an article that was published several months later, probably reflecting internal discussions and pressure not to publish it. The article did not please the interviewees, but that is another matter. 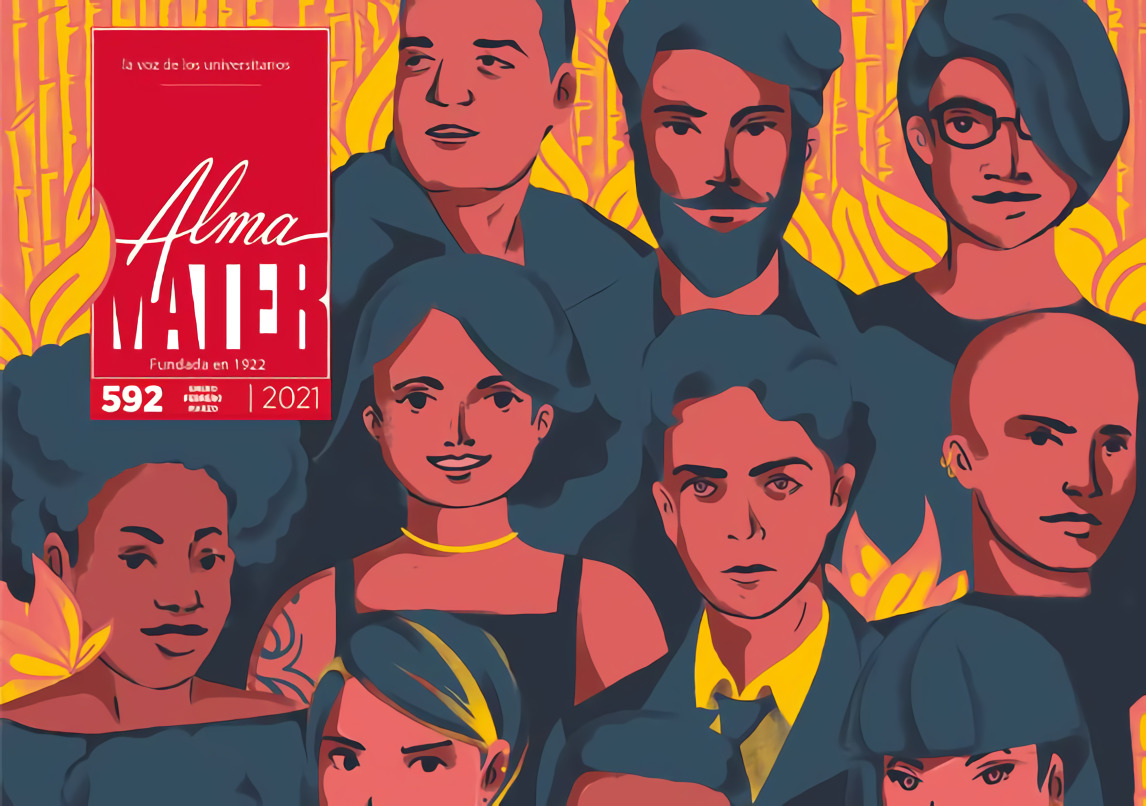 Alma Mater is a magazine aimed at Cuban youth, particularly student youth. In order to reach its potential audience, the magazine had adopted a light-hearted style and in some respects was even critical of officialdom / Image: fair use

This critical editorial line generated all kinds of attacks on Alma Mater. As early as November 2021, the magazine denounced a series of serious attacks and slanders, accusing the publication of having distanced itself from Mella and even of being closer to the dictator Machado (!). Clearly, some Stalinists, some of them with clout within the bureaucracy, were annoyed by the editorial line of the magazine. The editorial staff was accused of being “annexionists and opportunists who disguise their discourse as being of the critical left”. Some of the messages on social media precisely called for a purge of the editorial staff.

In reality, Julio Antonio Mella, founder of the first Communist Party of Cuba, was a person of firm ideas and never shied away from controversy or criticism. This led him to all kinds of confrontations during his membership in both the PCC and the Communist Party of Mexico, including his expulsion from the party in 1926 as a result of the hunger strike he carried out while in prison. To those who said that the editorial of Alma Mater did not honor its founder, many responded that the critics would probably have been with those who expelled Mella.

The attacks were stepped up again a few weeks ago, when the magazine echoed the mockery on social media of the advertisement of the food company Prodal. The article itself was innocuous, but it clearly upset someone. Also a new section in the magazine that explained the different definitions of common words, including their vulgar or popular meanings was upsetting for some. That was the last warning, on 11 April. In less than a fortnight, the editor was dismissed.

Against this background, and taking into account the way in which the decision was announced, it is impossible not to draw the conclusion that the reason for the decision is the fulminating political censorship of Alma Mater's editorial line.

It is not necessary to agree with everything the magazine publishes (e.g. the post 11J article on the economy interviewed economists who want to move faster towards “liberalisation"). What is clear is that the cause of socialism and the Cuban revolution is not strengthened by decisions of this kind, quite the contrary.

Bureaucratic arbitrariness, monolithic thinking imposed from above, has nothing revolutionary about it and its effect is to alienate a growing sector of the population, particularly among the youth, from the necessary task of defending the Cuban revolution. And it also strengthens the counter-revolutionary media; if people cannot read truthful information and critical opinions in the state media, some will end up reading the Washington-paid outlets.

In a country where there is a state monopoly on the press, the press must open its doors to all currents of revolutionary opinion. Let us not be told that revolutionary criticism undermines the Cuban revolution. On the contrary, it is the absence of criticism, the grey and emasculating officialdom that undermines it.

The period from 1959 to 1971 was perhaps the period of greatest danger for the revolution, the Bay of Pigs invasion, the missile crisis, and so on. And that period was characterised by the widest polemics and debate of ideas in all fields (art and literature, revolutionary strategy, economic policy and the teaching of Marxism, among others).

Let us not be told that this is not possible now, because in the end what will happen is that only official or counter-revolutionary opinions have access to the media. And among the official opinions, many are dedicated to promoting private property, the micro, small and medium-sized businesses, as a way out of the economic challenges facing the revolution, or to defending the bureaucracy, its errors, and its privileges.

All our solidarity with Armando Franco Senén and the editorial staff of Alma Mater.

* CLARIFICATION: Some Cuban comrades questioned my statement that “Alma Mater is the magazine of the FEU”. Actually, the issue is not entirely clear. I was guided by what EcuRed says in his entry about Alma Mater: "since its inception it reflects the interests of the University Student Federation (FEU) of Cuba"; and “in 1978 it became the body of the National Council of the FEU”. In his entry on the FEU, EcuRed also says that the publication of the FEU is the Alma Mater Magazine. In any case, the FEU is directed by the UJC, Alma Mater is published by the Casa Editorial Abril, which in turn is the publishing house of the UJC, therefore the UJC ultimately does have the authority to make the decision about the director of Alma Mater. The centre of my note was not the formal question, but the political question, hence this clarification.