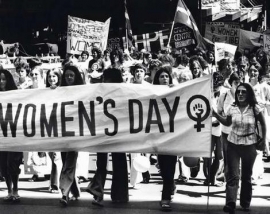 Working women have been struggling for complete equality in the workplace for over a century. In fact, a common thread running through many countries throughout the 20th Century was the struggle for “equal pay for work of equal value”, which meant irrespective of gender a worker should receive the same wage for the same kind of work. We are still not there, and with the onset of the crisis in 2008 things have begun to get worse.

According to a report published by The Economist in November 2011, “Back in the 1990s women in rich countries seemed to be heading towards a golden era.” It added that “Almost all rich countries have laws, passed mostly in the 1970s, that are meant to ensure equal pay for equal work, and the gap did narrow noticeably for a while when women first started to flood into the labour market.” It points out that in the United States for example, the differential between women’s and men’s wages has been reduced from 40% to 20% since the 1970s.

Significantly, however, it points out that most of this reduction came in the early years, and since then the process has slowed down. This one statistic underlines one important aspect Marxists have always maintained: class struggle, a generalised movement of workers for better wages and working conditions, is enormously beneficial for women workers.

The generalised rise in class struggle globally in the late 1960s and 1970s produced many reforms to the benefit of women, and not only in terms of wages and conditions. Other basic rights, such as the right to abortion or divorce, were won in many countries where they had not been previously recognised.

In the 1980s the class struggle declined as a result of the defeats on the trade union front, the British Miners’ Strike being one of the best examples of such defeats. With that defeat came an onslaught on all the gains of the past, both on wages and democratic rights, affecting male and female workers. But women, and working class women in particular, were hurt the most.

Over the past decade, in fact, a male graduate has had expected earnings on average 20% higher than a female graduate, but the gap was even wider for non–degree holders – i.e. less qualified labour – at 23% [source]

The 2008 crisis, even The Economist admitted in its 2011 article, “has thrown a spanner in the works”. This was a reference to the effects of the cuts in public spending affecting public sector workers, which were “beginning to hit female employment disproportionately hard.”

In Britain the impact of the crisis on wage differentials between working men and women has been dramatic. Economists at the World Economic Forum in 2014 looked at the gender wage differential. Ranked out of 136 countries for gender wage equality, between 2006 and 2013, Britain went from 9th to 18th, but in one year alone, from 2013 to 2014, it dropped even more sharply to 26th.

This big differential between female and male workers starts right at the beginning when young people enter the “labour market”. According to a poll commissioned by the Young Women’s Trust [Source: the Evening Standard, 7 September 2015], wages for male apprentices are 21 per cent higher than for their female equivalents. Young women earn on average £4.82 an hour compared to £5.85 for young men. On an annual basis, young women are £2000 worse off.

The Young Women’s Trust represents women in low-paid jobs under the age of 30. The reason for this situation is the same for women of all ages, i.e. women tend to work more in low pay sectors, such as healthcare, childcare and retail.

Dr Carole Easton of the Trust explained: “It is staggering that in the 21st century, certain employment sectors are hardly welcoming any young women; less than two per cent of construction apprentices are female and less than four per cent of engineering apprentices. Women are funnelled very early into a narrow range of opportunities, that are stereotypically gendered.”

The significance of this is that jobs in construction and engineering come with higher wages, which confirms the general point: there may well be gender equality in wages in these sectors, but very few women are employed in those high wage sectors.

Dr Easton added that “Women’s concerns may also be different, perhaps needing flexibility to look after children or for other caring responsibilities.” This highlights another discrimination women suffer from, the unspoken rule that they cannot have a career in certain sectors because sooner or later most of them will have children. For the capitalists, this is looked at in terms of cost. They would prefer not to have women who will at some point need to take time out of work, either to have children or later on to look after them. This channels women towards lower paid jobs.

It also explains another aspect which emerged from the same poll: close to one quarter of the women interviewed complained about not receiving any other training outside of work. The equivalent figure for young men was only 12%. This means that basically these young women are being used as cheap labour legally. They are employed to do work which often requires very little training, condemning them to a life of low-wage jobs.

How can all this be so, when there are laws that govern wage equality? The answer is clear when one looks at how the presence of women is not evenly spread across all types of employment, although they make up 47% of the overall workforce. For example, data from the Department for Education shows that in 2012 only two per cent of the early years workforce was male. Much of early years childcare is provided by private nurseries that pay most of their staff the minimum wage.

Women are also forced by family circumstances to take up low-pay part-time jobs. While 2.11 million men are employed in part time jobs the number of women is 5.85 million.

Today’s cleaning industry is another example. It has massively expanded since the 1970s and contributes annually over £8 billion to British GDP. It employs an estimated 446,000 people. Of these, an estimated 79 per cent are female and 78 per cent work part-time, and a large part is made up of immigrants. Most cleaning firms apply the law by having “equality policies”, the point is that most of them also “respect the law” by applying the National Minimum Wage! [source] Those employed illegally – and on much lower wages – are clearly not included in these statistics.

The 2008 crisis has had a similar impact worldwide on male to female wage differentials. According to an ILO report , a similar process has taken place to what we have seen in Britain: “Globally, gender gaps in unemployment and employment trended towards convergence in the period 2002 to 2007,” but then “grew again with the period of the crisis from 2008 to 2012 in many regions.”

If we were to look at the real position of women globally, the picture would be even worse: slave-like conditions exist in some countries, with no legal rights to fight back. Women are often forced to sell themselves merely to survive day-to-day. The present crisis for them is an utter nightmare.

However, there is good news for some women! The Economist, being what it is, the mouthpiece of the British capitalist class, in its 2011 article dedicated a part of its analysis to women who make it up the ladder, to the top of companies as CEOs, etc. The “good news” here is that in 2014 “there was a small increase in the percentage of women in senior official and managerial positions up from 34% to 35%...” [The Independent, 28 October 2014].

Like in all questions, women’s living conditions are determined by the class they belong to, only the situation is far worse for them. As in the 1970s, it is only through united working class struggle that women’s rights in the workplace can be defended and improved. The problem we have is that today’s trade union leaders are not leading the fight, either for men or for women. They are accepting rotten deal after rotten deal. Left to them real wages for all workers will go down, and for women it will be even worse!

However, in spite of the limitations of the trade union leaders in Britain, “The wages of women union members are on average 30% higher than those of non-unionised women” [source]. This reveals how historically the trade unions have been essential in raising women’s wages. Although there remains much to be done, the trade unions have played a key role in improving women’s wage levels and working conditions. This applies to workers in general, both men and women: “The average hourly wage for non-unionised workers in the private sector is £12.64. For union members, it’s £13.67. The ‘union premium’ is even bigger for young workers from ages 16-24, who earn 39% more than their non-unionised colleagues (that’s £7.84 to £10.18)” [source].

The overall workforce in Britain is now over 29 million strong. Of these 6.4 million are in a union - less than 25%. Working women are therefore around 15 million (47% of the total). Up to the mid-1980s, trade union membership had been growing, having reached around 45% of the overall workforce. Especially since the defeat of the miners’ strike, however, membership has been in decline. This simple fact alone reveals how a defeat for the miners (male workers) was also a defeat for women workers in general, as the statistics for wage levels between union and non-union jobs clearly demonstrate.

These millions of downtrodden working women are forced to keep their heads down for fear of losing their jobs. But all of history shows that once the working class as a whole reawakens, women are at the forefront. In the coming period, millions of young women will be forced to stand up for their rights and they will lead the struggle. They have a lot to fight for, both in terms of defending what is left of the past gains and fighting for real wage equality and for a living wage for all. Together with demands on wages will also come demands such as good quality childcare available for all parents, more flexible working hours, and the right to take time out of work – for both mothers and fathers – without this endangering women’s jobs and careers.

The women in the unions today and the millions who will come into them in the future will also play a key role in transforming the unions and breaking with the culture of moderation and collaboration with the bosses which many union leaders had become accustomed to in the past. In the process of struggle they will also draw the necessary conclusion that a system based on maximising profits is never going to grant full equality, but will continue to use every means possible to divide workers not just according to gender but also according to nationality, colour of skin, religion and so on. The system itself needs to be uprooted and replaced with one based on the real needs of men and women. That system can only be socialism.