South Africa
Share
Tweet
As was to be predicted the ANC government and the employers made a combined effort to discredit COSATU's two-day general strike on October 1 and 2. The strike has opened the doors for an all-out attack on COSATU by the right wing of the ANC. This started with Thabo Mbeki's statements on Friday to the effect that the "ANC is not a vehicle for socialism" and that anyone who disagreed was welcomed to leave, and accusing COSATU of being infiltrated by the "ultra-left". 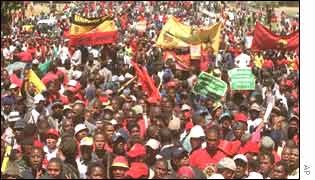 As was to be predicted the ANC government and the employers made a combined effort to discredit COSATU's two-day general on October 1 and 2. The employers' federation SACOB "estimated" the number of workers participating in COSATU's action against privatisation at 15%. The government went even further and declared that only 5% of workers in the public sector had participated. Public Enterprises Minister Jeff Radebe forgot to say that many workers in the public sector were not allowed to participate anyway since they work in sectors which are considered essential (including electricity, water, hospitals, etc).

However COSATU had a different view: "We believe the stay-away has been supported by at least 60% of the workers in the formal sector." This would mean that 3 million participated, well beyond COSATU's 1.8 million members - roughly the same level of participation as in the general strike in August last year. The following of the strike was stronger in the Free State, Mpumalanga and Gauteng, where strike levels even reached 80 and 90%. One of COSATU's largest affiliates, the mine workers' union NUM, reported that between 60 and 80% of their members in the mining, energy and construction industries supported the strike. Participation in the motor manufacturing plants was also solid with five of the seven companies having their production severely disrupted. 90% of workers in the tyre manufacturing plants followed the strike. Durban harbour was one of the worst affected by the strike with 92% of workers in the afternoon shift going on strike.

It is quite clear that the strike has also opened the doors for an all-out attack against COSATU on the part of the right wing of the ANC. This started with Thabo Mbeki's statements on Friday to the effect that the "ANC is not a vehicle for socialism" and that anyone who disagreed was welcomed to leave and accusing COSATU of being infiltrated by the "ultra-left". On Wednesday, October 2, on the second day of the strike, five senior members of the government gave a press conference and reaffirmed the government's commitment to privatisation policies, which Jeff Radebe said would be accelerated "because of its benefits". The five ministers released a statement in which they said that COSATU was facing a crisis of leadership and that they hoped the trade union federation would reassess its policies and "pursue the course of a constructive exchange of ideas that their membership and society prefer." The significant thing about this statement is that the five ministers signing it, Water Affairs and Forestry Minister Ronnie Kasrils, Public Enterprises Minister Jeff Radebe, Trade and Industry Minister Alec Erwin, Minister in the Presidency Essop Pahad and Minister of Provincial and Local Government Sydney Mafumado, are all prominent members of the South African Communist Party, an organization which officially supported the strike. Although some of the ministers were recently removed from the Central Committee of the SACP by angry delegates at its 11th National Congress in July, they remain party members and one of them, Ronnie Kasrils said he was speaking both in his capacity as a ANC NEC member and also as a member of the SACP Politburo!

At the same time, the ANC Youth League claimed that COSATU had been infiltrated by ultra-left elements who were determined to use the strike to weaken and unseat the ANC government. Youth League president Malusi Gigaba also accused COSATU leaders of being politically illiterate and said that the "ANC needs to educate some of these leaders because that is where the confusion is." He added that "the flood of insults hurled at our leadership, especially our President, have been regrettable. The litany of lies has served only to undermine and befuddle long-held ANC economic policies."

It was inevitable that the pro-capitalist policies of the ANC government would result in a backlash on the part of the labour movement and many of those who voted for the ANC in poor and working class communities up and down the country. The tens of thousands who marched against the Earth Summit in a demonstration called by a coalition of social movements and which was at least ten times larger than the official demonstration called by the ANC with the support of COSATU and the SACP, are an indication of the accumulation of anger, frustration and disillusionment with the record of the ANC in power. COSATU's general strike, and particularly the mighty mass march in Johannesburg are a further demonstration of that.

The problem is that while the ANC right wing has made its positions and its commitment to capitalism crystal clear, the leaders of COSATU and the SACP continue to give confused messages to their own members and supporters. While the SACP supports the general strike against privatisation, its ministers in government promise to accelerate privatisation policies. When SACP deputy general secretary Jeremy Cronin makes some mild criticisms of the ANC leadership, warning of the danger of ZANUification of the ANC (that is the alienation of the ANC from its traditional mass base) he is immediately and publicly lambasted by ANC leaders and is forced to offer a public apology! COSATU leaders insist that they are not against the ANC government, but just that they disagree with some of its policies. And as always, weakness invites aggression.

One of the main reasons for this confusion is the SACP leaders' commitment to the strategy of the so-called National Democratic Revolution. According to this, the "deepening and strengthening of the NDR" will eventually lead to socialism. This frankly does not make any sense, since the ANC government is pursuing an openly pro-capitalist policy - all they are worried about is the creation of a black capitalist class. How the "deepening and strengthening" of these policies can lead to socialism is a mystery. In fact this is clearly not a communist policy and it represents the adoption of a reformist social-democratic policy.

A genuine socialist policy on the part of the SACP and COSATU would be to explain clearly that under capitalism (even a democratic one) the pressing demands of the masses of working class people for jobs, houses, food and land cannot be fulfilled in any meaningful way. This has been amply proven by the experience of the ANC government over the last 8 years. Whatever limited delivery of services that there has been in fields like water, electricity, houses, is being eroded by poverty and mass unemployment. The way forward is the struggle for socialism. The nationalization under workers' control of the handful of monopoly groups in industry, finance and mining which control the bulk of the South African economy, and the democratic planning of these in the benefit of the interests of the majority of society would be the only way to release the necessary resources to provide a better life for all. In fact, elements of such a programme are already outlined in the Freedom Charter, which clearly says that the wealth of the country shall belong to the people. South African society is already as national and as democratic as it will ever be under capitalism. The SACP and COSATU must abandon the paralysing ideas of pursuing any national democratic revolution and take firmly the course of the struggle for socialism. If they did that, they would certainly win the support of the majority of the ANC rank and file members and supporters who fought for liberation in order to achieve not merely formal political rights but a better life for all.