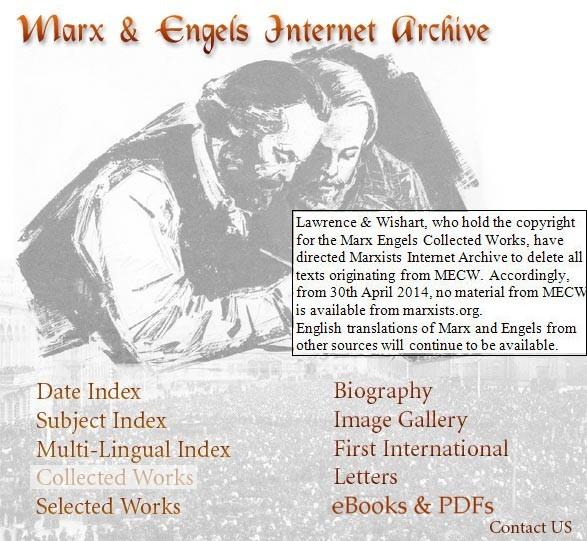 The decision of Lawrence & Wishart to demand that the Marxist Internet Archive (marxists.org) take down the collected works of Marx and Engels from their website has sparked justified outrage across the internet.

After the Marxist Internet Archive (MIA) announced the request by the publisher and that it would comply at least two petitions have been launched, one collecting 5,000+ signatures and the other 2,500+. The anarchists around Libcom and The Occupied Times immediately seized the opportunity to publish a copy of the collected works on their website. They make the point that we’re in a particular stage of the class struggle and that workers should have full access to these text. (Occupied Times). We agree. In this particular period we are indeed seeing a renewed interest in Marxism, and it is a great shame that these works will not be accessible.

The MIA has provided an easily accessible, searchable, online resource for anyone interested in Marxism. The volunteers must have put in countless hours in scanning, proof reading and coding all the texts that are available on the site. It ought to be celebrated by Marxists, not harassed with copyright legislation for works that were produced decades ago.

Originally, the MIA had made a deal with the publisher to allow them to publish the first 10 volumes. After all, the bulk of the translation and editing work had been done by Progress Publishers, the Moscow publishing house. The copyright was later on claimed by L&W. The first volumes were all published between 1975 and 1978 and L&W's claim to these is dubious to say the least. So, all in all, the costs incurred for L&W must have been recuperated many times already.

In either case, the 50 volumes of the Collected Works are sold at £50 a copy, which is a steep sum for any worker. L&W's defence of their actions are unconvincing. According to Sally Davison, the managing director of L&W, the Collected Works is merely “an academic edition” that isn't “necessary for revolutionary activity” (Claiming Copyright on Marx? New York Times). Although L&W are making great effort to make the collected works available to academics, workers, it seems, have to settle for the Communist Manifesto and possibly the Capital.

L&W is now planning to provide the Collected Works to academic institutions on an online subscription basis. It is probably safe to assume that the cost will be steep. Clearly, the company sees the Collected Works as a cash cow, which, in this time of renewed interest in Marx, they can milk. The consequence of this is that millions of radicalised workers around the world will be deprived of their access to the Collected Works. The only reason for this is to keep L&W ticking over.

If L&W were doing this in order to find the money to make more readily available the classical texts of Marxism. If it was to produce cheap editions of more common texts, one could have a certain sympathy for the decision. But the publisher is mainly publishing relatively expensive books for a limited audience. They have clearly given up all ambitions of making the texts of Marx, Engels, not to mention Lenin available to the mass of people.

What is next? Probably L&W have claims over other translations as well, which are out of print and mainly available online. The logic of what they are doing now is to ask MIA to take these down as well and provide them at cost to academic institutions and individuals who can afford to pay.

In this sense they mirror Pathfinder Press, who by an accident of history wound up with the copyright of translations of the works of Leon Trotsky, which they provide at outrageous prices for academic institutions. Their charge for the 14 volumes of the Writings of Trotsky, to be fair, is $35 (£27) per volume, rather than £50.

In 2000, Pathfinder Press sent an ultimatum from a prominent law firm, threatening to take MIA to court if they did not take down the works to which Pathfinder had copyright. MIA understandably did not want to undergo that process so their case was never tested in court and the articles were removed from the archive.

To use copyright legislation to demand exclusive right to works (or translations) produced many decades ago, is, to be frank, disgraceful.

We do have a certain sympathy for the need for left-wing publishers to charge for what they produce. There are costs of printing, editing, laying out and sometimes writing. But Marxists do have a duty beyond the purely commercial. The purpose of printing and publishing books is not to provide jobs for struggling left-wingers. Rather, it is to spread the ideas of Marxism to the widest possible audience. To basically restrict access to academic institutions to translations of Marx and Engels' works is a disgrace and Marx would undoubtedly have objected strenuously to the actions of L&W.

It isn't just the workers and youth in the advanced capitalist countries who would struggle to find the means to access these works at the prices charged. In the former colonial countries, the prices make the works completely inaccessible.

The Internet provides an excellent opportunity for Marxists to provide access to ideas for free. It is our duty to use this to make the writings accessible to workers and youth across the world, whether they have access to a university library or not. On In Defence of Marxism you do therefore find most of the publications of Wellred Books available for free. We also co-operate with MIA in maintaining the Ted Grant Internet Archive.

Digital publication does pose a challenge in terms of raising revenue for all publishers. But we can't take the approach of bourgeois publishers and restrict access to those that can pay for them. Other sources of revenue has to be found. In this time of heightened interest in Marxism, the attempt of L&W and Pathfinder to restrict access to the texts of Marxists is criminal.