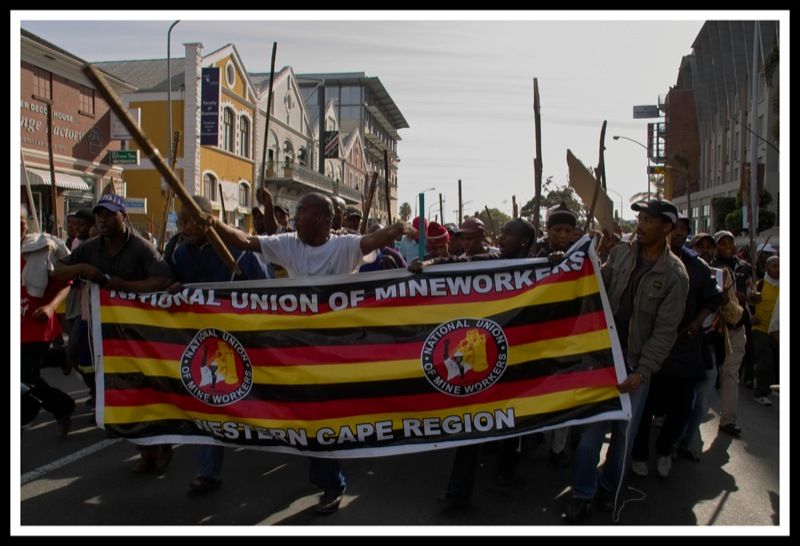 The working masses and poor of South Africa overthrew the old hated Apartheid regime as a means of improving their living and working conditions. Instead what we have is a party in power, the ANC, which was created by the working masses but which is presently carrying out policies in the interests of the rich. This contradiction must be resolved and the only way is for the working people to take back control of the party they created.

The South African Navy is currently engaged in joint operations with the United States Navy. Meanwhile, the ANC Youth League is calling for the nationalisation of the Mines. The National Union of Metal Workers of South Africa (NUMSA) is calling for the nationalisation of the wealth of leading black “empowered” mining industrialists, Patrice Motsepe and Cyril Ramaphosa, citing the obscenity of their spectacular wealth in the sea of poverty that is South Africa. 700,000 workers (that is almost one in five workers) have lost their jobs since the beginning of the year, while the government bends over backwards to keep capitalist businesses afloat. And trade union membership is in rapid decline.

The President intervenes to have capitalist mercenaries released from jail in Equatorial Guinea, while PAC liberation fighters still rot in jail, 15 years after first democratic elections.

10,000 South Africans register for debt counselling every month, while the wealthy elite preach that the frugality of the poor in this time of recession (more likely to be a depression) is a valuable lesson for the same poor, and simultaneously complaining that a lack of demand, including for credit, is hampering the recovery of the economy. Clearly they would like to see their own pockets swelled with state assistance, and are looking forward to a time of rapid export growth and magnificent profit margins on the back of a depleted working class.

COSATU and the SACP are fighting to curb the powers of “neo-liberal” planning minister Trevor Manuel. In contrast the bourgeoisie views the Minister Ebrahim Patel with grave suspicion. COSATU bewails the fact that Pravin Gordhan, the new Minister of Finance, is doggedly sticking to Trevor Manuel’s economic fundamentals of inflation targeting and rigid interest rate controls despite the fact that the country is in a severe recession (depression). COSATU fails to understand that Gordhan’s “neo-liberal” mandate does not come from the voters but from the capitalist ruling class. On the other hand, the capitalist media and Billy Masetlha (former National Intelligence Agency spook) are warning that the SACP and COSATU are trying to take control of the ANC, i.e. Their own party!

These are all the contradictions, as various factions struggle to control the steering wheel of the ANC bus. The reason for this is the fact that the bus picks up passengers who are all intending to go in different directions and reach divergent destinations. Those who sell the bus tickets (ANC Party membership cards) are vague about the end destination, hence the confusion of the passengers. The struggle for the control of the steering wheel of a moving vehicle is a dangerous business. Unless someone actually succeeds in getting a firm grip on it, and steer it towards a clear ideological direction, the bus with its multi-class passengers will reach no destination at all, and fly off a cliff somewhere with disastrous consequences.

The working class must wrest control of the steering wheel of the bus away from the bureaucrats and petit bourgeois nationalists in the ANC so as to avoid disaster. Only by abandoning the class conciliatory policies of the current leadership of the ANC and steering the bus in a more revolutionary direction will we have a useful tool to pose a serious socialist alternative to the capitalist system – this system that is responsible for all the contradictions South African society finds itself in at the moment and which is inflicting hardship on the workers and poor of this country.