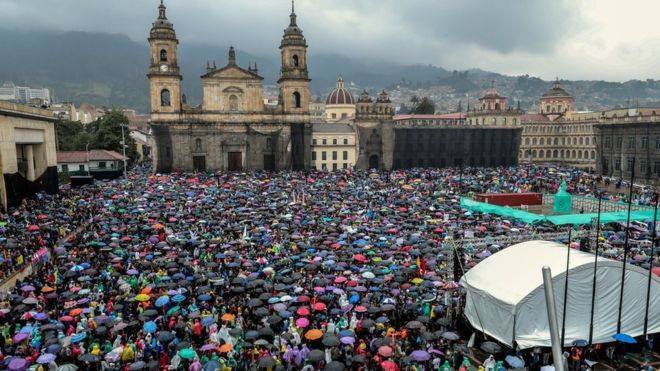 On 21 November, a powerful general strike paralysed Colombia. Originally called to reject a package of measures by the right-wing government of Ivan Duque, including a counter reform of the labour laws, a counter reform of pensions and massive cuts in education, it became the focal point for accumulated anger. The strike was the largest the country has seen since 1977 and there were mass demonstrations in every town and city. The government responded with repression and threats. This only served to escalate the situation.

In response, there was a spontaneous call for the continuation of the strike on Friday, 22 November when protests continued. The government has now militarised Bogota and declared a curfew across the capital and other cities. Duque is extremely unpopular, with 69 percent opposing him even before the strike. The movement has the strength to bring him down but is lacking a clear leadership.

With this, Colombia has joined the tidal wave of the Latin American revolution and the insurrections we have seen in Ecuador and Chile. That this is happening in Colombia, a country that was presented as a bulwark of the most reactionary right wing is extremely significant. The myth of a “conservative wave” in Latin America, peddled by right-wing commentators and demoralised “left” academics alike, which did not have any basis in reality, and can now be decisively put to rest.

We publish here an account from a comrade in Bogota.

These lines are written at 11:30 pm on Friday in Bogotá, under the first curfew decreed since 1977. It could be said the night is silent. One can hear their neighbours coughing in the building opposite. But this silence is punctuated by the noise of a helicopter surveying the neighbourhood from the morning of 21 November, the date on which the workers of Colombia decided to go on strike – desperate to stop the "package" of measures announced by President Iván Duque. The despair of the workers that provoked this strike is matched by the fear now felt by the president and his boss: senator and former president, Álvaro Uribe Vélez. 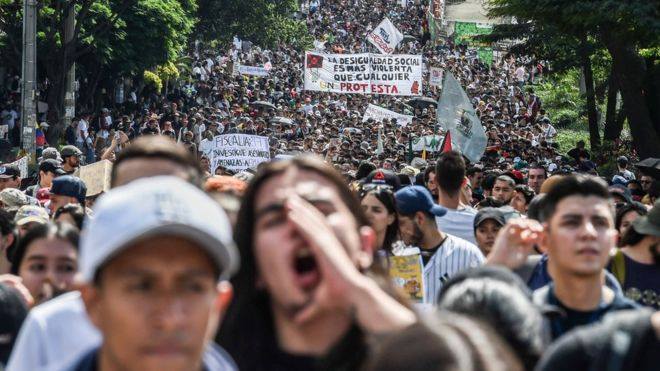 The wave of insurrection across Latin America hit Colombia / Image: fair use

This call for a national strike, which emerged from leftist organisations, trade unions and workers' associations, has surpassed the expectations of those who called for it. This explosion of anger is the result of a great accumulation of discontent after decades of exploitation and violence. It has not been a slow and gradual process; on the contrary, the historical backwardness of the countryside, political violence, the negligible development of the industry, political repression and violence against the most vulnerable, were nourished by cuts to education, attacks on the environment, cuts to the wages of young people, increased drug trafficking and of the mafia power associated to it, murders of social leaders and the killing of minors (accused by the state of being guerrillas) and so on. The result is more than a sum of discontent, it is an awakening of conscience that has led Colombian workers and youth to take to the streets and demand the dignified life they deserved centuries ago, and to put an end to years of misery, hunger and devastation.

The example of the struggles of Puerto Rico, Ecuador and Chile has served as a spark to ignite the masses’ discontent. The crowds that gathered throughout the country in mass demonstrations have broken historical records. Although the government tried to promote a figure of 150,000 people mobilising in the country in total, the reality is that, in Bogotá alone, this figure could be multiplied by nine or ten.

Days before the mobilisation, the fear of the Colombian bourgeoisie could be felt. Their media displayed all kinds of dissuasive lies. They decreed the closing of the country's borders. Police forces patrolled strategic sectors of the city. The buildings of the state and of the big companies were all placed under protection. In previous days, the headquarters of the Communist Party, artistic groups and independent media were raided. However, this did not cow the people, who took to the streets en masse.

21N: Colombia decides to write its own story

From the beginning of the mobilisations, the ESMAD (Mobile Riot Squadron) unleashed violent repression, especially in working-class areas. The main demonstration marched through Carrera 7 (the backbone of Bogotá) unmolested. However, the police had infiltrated all kinds of lumpen elements. Those who attempted to provoke acts of violence were expelled from the mobilisation by protesters. Some thieves managed to steal phones, but everyone who lives in Bogotá has experienced this already. Elsewhere in the country, police brutality was explicitly felt. The most unfortunate case was perhaps the attack suffered by young people who knelt peacefully before law enforcement officers. They responded by turning a crossing of avenues into a battlefield. By late afternoon, the mobilisations continued.

In the city of Cali, the police caused a wave of riots in order to justify widespread repression. With this, they had a perfect excuse to declare a curfew. The response of the citizens, outraged by the lack of commitment, on the part of the mayors, to the right to protest; and the brutality and viciousness displayed by the National Police against unarmed people (especially women), motivated the call for a cacerolazo: a protest consisting of the noisy banging of pots and pans. From 7:00 pm, in various cities of the country, pots and pans – which are increasingly difficult to fill with food – were beaten by spoons and grinders for hours. Even in cities that use to be traditional strongholds of support for Uribe – like Medellín – a loud and rhythmic symphony of emancipation was heard. 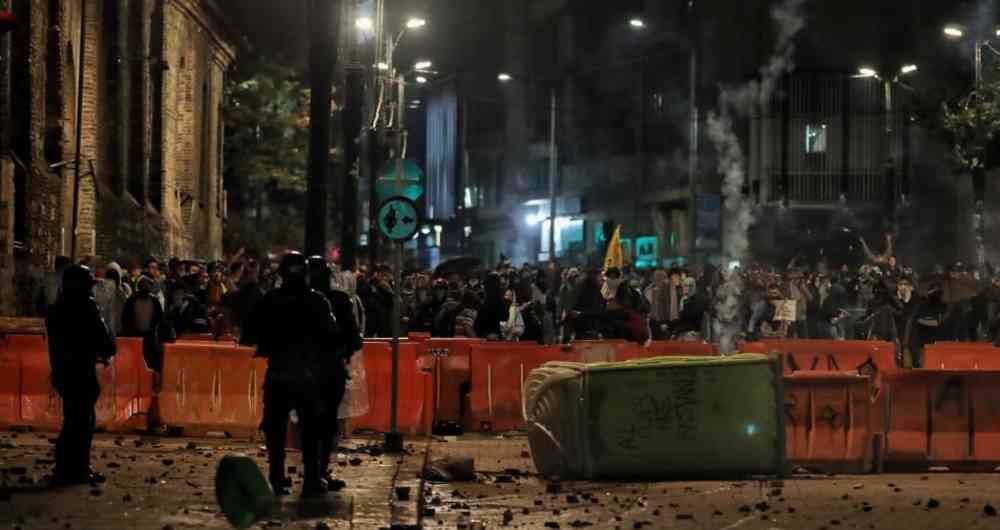 The masses have been enraged by the violence of the police / Image: fair use

Meanwhile, union leaders prepared a statement, declaring their willingness to negotiate with the government. Minutes later, Iván Duque spoke on television. Despite his belligerent tone, he did not say anything clear. He said he was a defender of democracy and promised repression of the vandals. But we already knew that vandalism was the work of the state. When a guy with the responsibility of governing a country cannot even express himself clearly, it is time to fire him. Therefore, disobeying the advice of the union leaders, a new day of stoppage was promoted for Friday. In various cities the sale of alcohol was suspended, and curfews were decreed.

The strike goes on

From the morning of Friday 22 November, the transport problems in the capital caused by the closure of TransMilenio (BRT) bus stations and interchanges were evident. This did not prevent the masses from flooding into the city centre. Especially young people. The march was repressed and cacerolazos were organised in public spaces of the city. The attendance was massive in all cases, and the state responded with a curfew in the whole of Bogota and a vague announcement of talks next week.

As soon as the curfew began, reports of vandals entering houses were heard. The communication between the workers exposed this as the handiwork of criminals hired by the police, according to some reports, for $ 50,000 (€ 13, approx.). In areas like 7 de Agosto, shots were heard. The thing went so badly that the mayor of Bogotá, Enrique Peñalosa, denounced that these news reports were part of a campaign to create panic. Now, in several residential complexes in the city, workers stand guard armed with what they had to hand in their homes. There has been a call to continue the strike this Saturday from 10:00 a.m.

Today in Colombia huge protests against the right-wing government and President swept across the country.

This display of violence, this eagerness to use all possible methods of repression, demonstrates the fear of a president who the south of the country has called a coward (chuchinga bambaro). This cowardice was evident in the despair of Álvaro Uribe when he denounced the blockage of his Twitter account. The same inconsistencies when talking about repression and respect for dialogue and democracy further evidence of the terror that President Duque and his boss Uribe are filled with.

While deploying repression and militarising Bogotá, Duque called for a "national conversation" about the necessary social measures. In more ways than one, these tactics of carrot and stick remind us of the Chilean president Piñera. But Colombia is not Chile and the practice of applying foreign formulas has always been paid for dearly by our oligarchy.

The state of affairs supported by the regime is not able to fulfil the minimum needs of the masses. The people have no confidence in their highest authority. The only guarantees that we have from the government is violence and death – which is why it has become necessary to go on the offensive.

What if we overthrow the government?

At this time, the only sure way to put an end to the "package" of attacks on the workers by Duque is to remove him from the seat of Bolivar. Achieving this will not be easy. The government is weak and unpopular. Although the discontent of the masses is clear, a revolutionary leadership that guides the movement towards victory has not been consolidated. For this, it is necessary that, in these days of struggle – which have brought us closer to our neighbours, and in which we have seen the awakening of the political consciousness of our friends – we organise popular cabildos [councils], in which the immediate problems facing the movement are discussed and solutions sought. These councils must operate through democratic structures, in such a way as to ensure that they are under the control of the people. It is in the heat of these explosive events, and through these bodies, that the leaders we need will be forged.

Yet another US-backed Latin American President, Ivan Duque, is facing an uprising over neoliberal economic policies and privatisation plans

Will Western media cover these popular uprisings? Or do protests only matter in countries that are enemies of the US? pic.twitter.com/B6nmgBO5yj

As we approach this objective, we must continue the stoppage until Iván Duque withdraws from power and both he and his boss are prosecuted. As part of this, we must demand the dissolution of ESMAD and form workers' self-defence committees – perhaps named after the victims of state violence. Only these bodies, under democratic control, can guarantee true security. After this, only a socialist programme, which emerges from these councils, can provide a way out after five centuries of capitalist violence. Achieving this will not be easy, but the workers understand that the most important victories are only achieved on the basis of struggle.