Details
In Defence of Marxism
07 October 2019 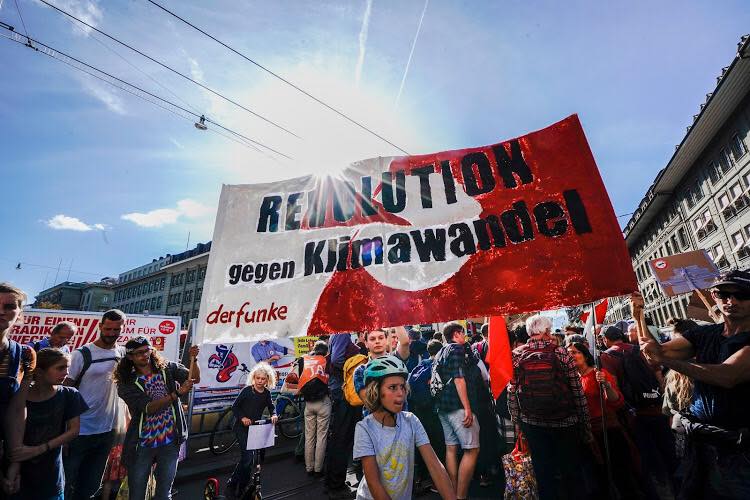 Our comrades have continued to march alongside workers and youth on climate demonstrations all over the world, participating in enormous mobilisations against capitalism's destruction of the planet.

On Sept. 27, Montreal’s streets were flooded with more than half a million workers and youth demanding action against climate change. A total of 146 student associations, representing more than 200,000 students, were on strike for this day. As the pressure built up, the Montreal school board cancelled classes and even many businesses closed shop to allow their workers to participate. What was also notable was that 11 trade unions, representing 7,600 workers, also called a day of strike action. This was the biggest demonstration in the history of Quebec and Canada!

Starting in Sweden in August 2018, Skolstrejk För Klimatet (School Strike for the Climate) has blossomed into a worldwide mass movement involving students, workers, major unions and political parties, but most notably high schoolers. This last week saw a wave of demonstrations across Canada with 100,000 marching in Vancouver, 75,000 in Toronto, 40,000 in Ottawa and tens of thousands in other major cities. In total, more than 7 million people worldwide took to the streets for the #WeekForFuture demonstrations.

Starting at Parc Mont-Royal in the heart of the city, hundreds of thousands flooded into the park in what became a never-ending human sea. Protesters climbed traffic lights and statues to shout slogans and display their placards and the crowd erupted with electric energy. The march swept through downtown Montreal completely flooding the streets as students chanted to awed onlookers, “Dans la rue avec nous!” (In the streets with us!). For four kilometres, there marched a solid mass of people. There were so many people that by the time the speeches began in Montreal’s Old Port (including a speech by Greta Thunberg), tens of thousands were still making their way through the streets. Downtown Montreal was completely paralyzed. A protest of this size has not been seen in Montreal since the 2012 student strike.

Present at the demonstration were major trade unions such as the CSN and Unifor, as well as major political parties Québec solidaire, the NDP, the Green Party and even the federal Liberal Party with Justin Trudeau marching. This led to a wave of anti-Trudeau chants and jokes made at his expense. The common comment was “What is he protesting? Himself?” At one point a protester threw an egg at Trudeau and was subsequently tackled to the ground by security forces.

In particular, the left party Québec solidaire mobilised heavily for this demonstration, with a contingent of 1,000 people. Most importantly, a shift to the left was apparent in the march among students. It was common to see anti-capitalist placards and banners like “The Planet Over Profit!” and “The System Is Wrong” being held by high schoolers.

However, while the general trend was to the left and most people recognised that capitalism was a problem, there was not a clear idea of what needed to be done. It is precisely for this reason that the Marxists of La Riposte socialiste, the Quebec section of the International Marxist Tendency, organised a sizeable socialist contingent to put forward a bold socialist solution to the climate crisis. Our banners read “Revolutionary Change, Not Climate Change” and “Crise écologique, solution socialiste” (“ecological crisis, socialist solution”), and we chanted slogans targeting the capitalists and their system for destroying the planet. 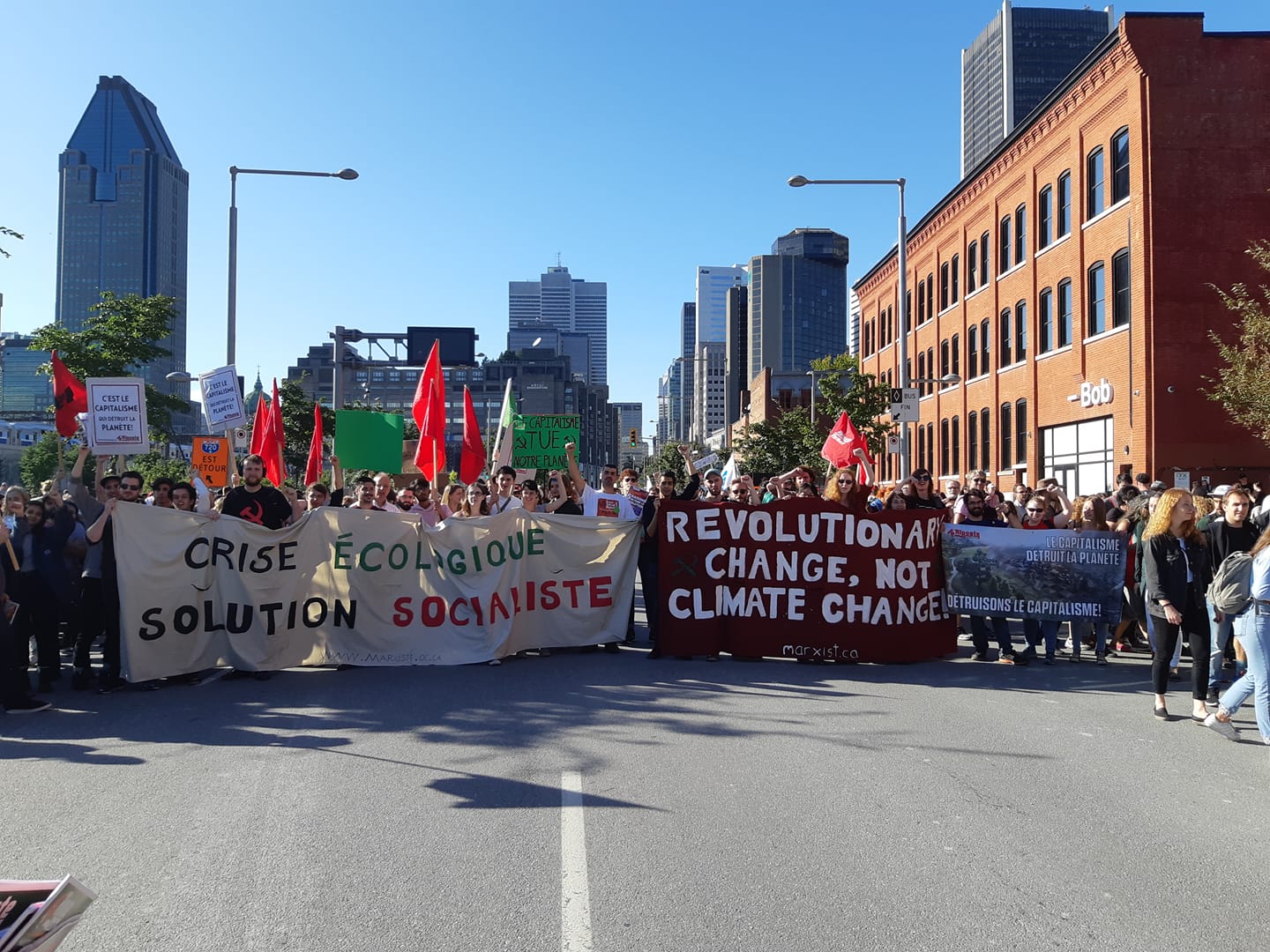 We had a very good response as hundreds of people flooded to our table, buying copies of La Riposte socialiste and Fightback magazine. We explained that in order to meaningfully address climate change, the main levers of the economy cannot be run for the profit of the few, but must be owned collectively and democratically managed. As long as the oil companies and other multinationals are owned by a tiny elite, their drive for profit will continue to destroy our planet. Many agreed with our ideas and expressed interest in fighting for socialism.

The march ended with a speech by Greta Thunberg, who began with a criticism of both Canada’s and Sweden’s governments: “You are a nation that is allegedly a climate leader. Sweden is also allegedly a climate leader … In both cases it means absolutely nothing. In both cases, it’s just empty words.” She concluded by saying that “We have been told so many times that there is no point in doing this, that we can’t have an impact and make a difference. But I think we have proven that to be wrong by now. We are the change and change is coming.” 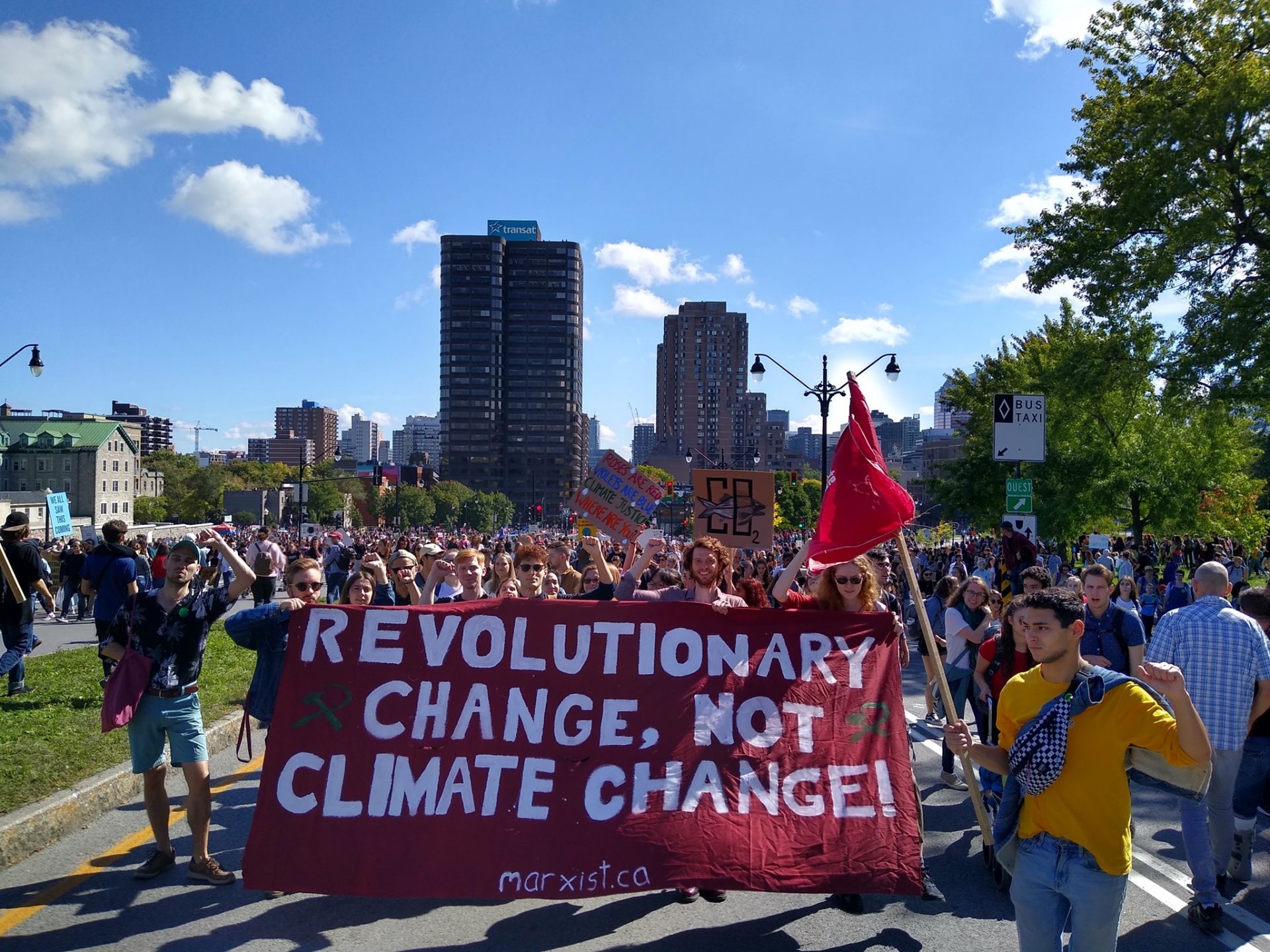 This movement shows that the youth are showing the way forward and are not willing to watch from the sidelines as the world sinks into barbarism. Millions of youth worldwide are reaching the conclusion that capitalist politicians do not serve them. As socialism is becoming increasingly in vogue, and strikes are becoming commonplace among the youth, one can only imagine the shudders of fear the capitalist establishment feels when they hear those words: “change is coming, whether you like it or not.”

Our Salvadoran comrades organised a reading circle on 20 September, where they read about capitalism and climate change. The next day, they organised a public discussion about climate change and the socialist alternative at the University of El Salvador. The comrades encouraged the youth to participate in the strike against climate change, which in El Salvador took place on September 26, with the slogan “Without water there is no future” this due to the attempts of the parliament to privatize water, which has unleashed an intense fight in the streets.

The comrades were involved in coordinating the event of September 26, which consisted of a protest early in the day and then a march towards the Ministry of the Environment and Natural Resources. 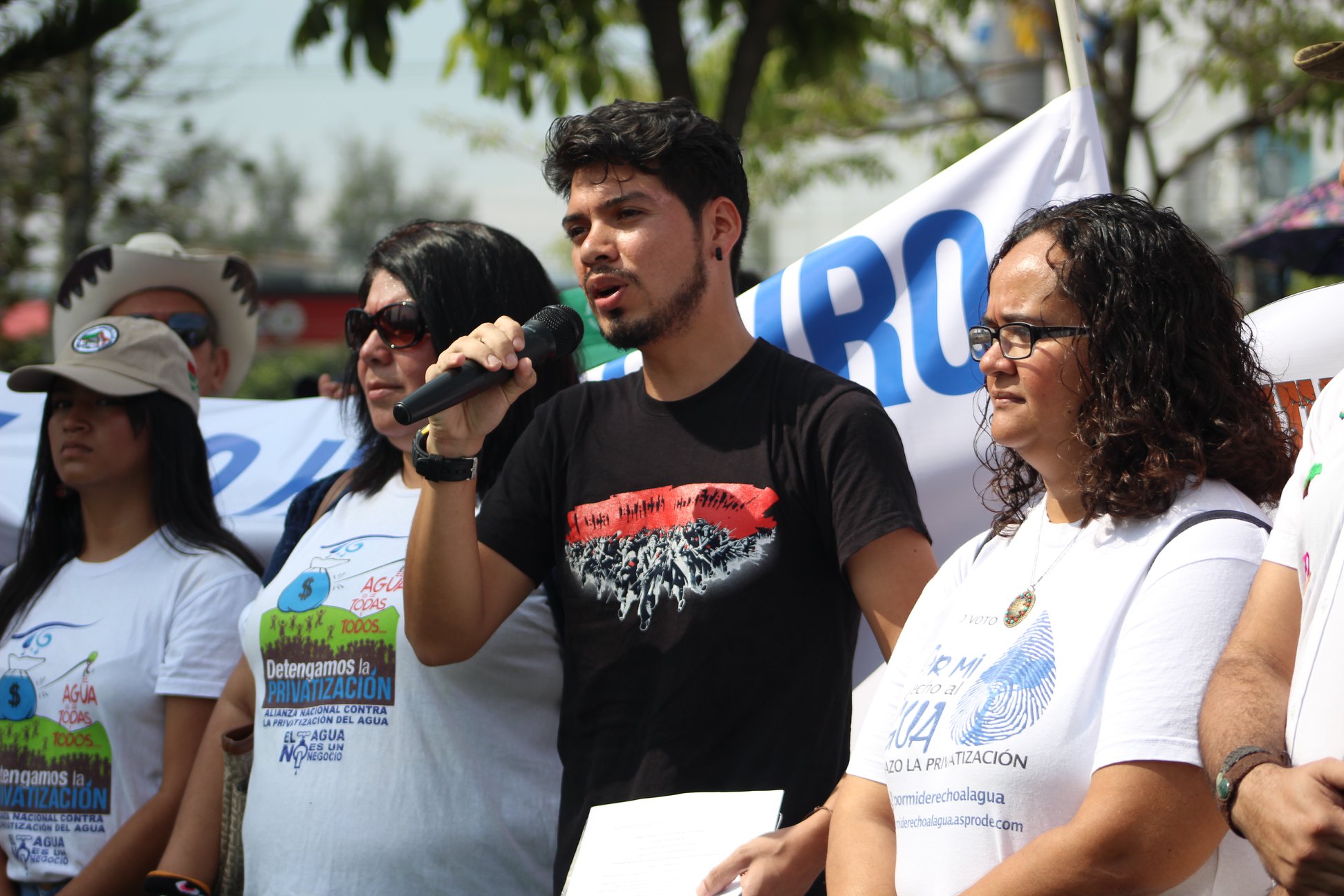 On the day of the event, around 500 people were present. There was also a large presence of national and international press. The comrades had a representative in the commission that gave statements to the press, and its spokesperson pointed to capitalism as the main culprit for climate change, and of its disastrous effects on poor countries like ours. They also criticised the actions of the government, which have allowed the contamination and depredation of the environment by international corporations. They demanded real policies against predatory capital, as well as the cessation attempts to privatise our resources, including water.

The commission also demanded that the government reverse permits for urban megaprojects, commerce and services, that have been released upon its arrival last June, without taking into account the country's environmental laws, under the false flag of progress.

The country does not need any more shopping centers, hotel complexes, or housing developments that the workers cannot afford. Salvadorans need more schools, hospitals, universities, and homes affordable to the working class. The type of megaprojects the central government proposes only reflect that its interests are not to benefit the poor classes, but to serve foreign capital. It is an accomplice of anarchic and absurd capitalist production, and therefore bears its share of responsibility for the climate crisis.

The commission delivered a statement to the Ministry of Environment where they stated and demanded:

On Friday 27 September, the comrades held a miniature revolutionary festival, with music and a poetry recital. Despite the heavy rain, about 15 young people attended to discuss capitalism and climate change, drawing very good conclusions about the revolutionary struggle for a planned economy in balance with the environment.

During the week the comrades also distributed three new publications in booklet format: "Capitalism Kills the Planet. A Revolution is needed!", "Manifesto against climate change" and "The struggles for water in El Salvador."

With 100,000 demonstrators, the national climate strike on 28 September was certainly the largest demonstration in Bern in several decades. It was also the largest climate demo in Switzerland to date. Together with the huge women's strike on 14 June, it is clear that the fight against the system in Switzerland has been taken to a new level in recent months. Young people in particular are thirsting for radical answers, as became clear again last Saturday. 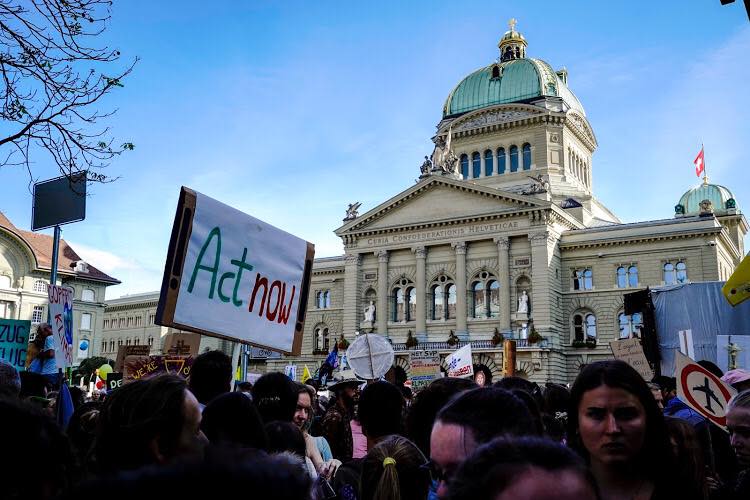 In stark contrast to this are the elections in three weeks' time. All parties try to appear green, but the climate strike's urgent demand for "system change" is the big absentee in the election campaign. While the traditional mass organisations are clumsily scrambling through the election race, the Swiss IMT section der Funke/l'étincelle has confidence in the youth and working class. Their revolutionary ideas attract more and more people, and they achieved record sales at the climate demo.