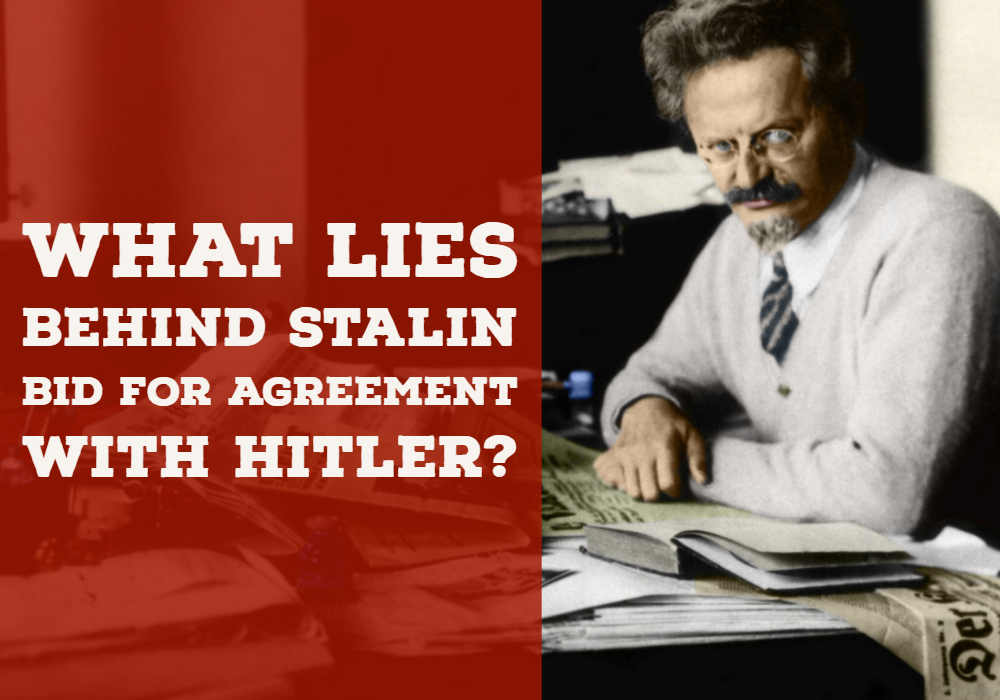 Diplomatic Circles of All Capitalist Countries Are Now Considering a Possible Moscow-Berlin Axis; What Does It Mean to Workers of the World?

In recent months, the newspapers have printed a good deal concerning secret negotiations between Berlin and Moscow. It has been rumored that a political and even a military agreement in the guise of an economic treaty is in preparation. It is difficult to judge as yet, just what is correct in these communications. At all events, there are quite unmistakable symptoms which testify to the fact that some sort of negotiations have been and are going on. In any case, the outcome of these secret negotiations, at the present stage, depends, not upon Stalin’s loyalty to the principles of democracy nor upon Hitler’s fealty to the banner of “anti-Marxism” but rather upon the international conjuncture. An agreement between Stalin and Hitler, if attained – and there is nothing impossible in that, could astonish only the most hopeless simpletons from among all the varieties of democratic “Fronts” and pacifist “Leagues.”

A Factor in International Politics

We shall not dwell here on the question of how probable is an agreement between Stalin and Hitler, or, to put it more correctly, between Hitler and Stalin in the immediate future. This question would require a detailed analysis of the international situation in all its possible variants. But even if this were done, the answer would still have to be rigidly qualified, inasmuch as the players themselves could hardly state today with complete certainty just where the play will lead them. But even before the rapprochement between Moscow and Berlin has been factually attained, it has become a factor in international politics, for all the diplomatic centers of Europe and the world are now taking this possibility into account. Let us, too, briefly consider this possibility.

An Agreement with Slaveholders

An agreement with an imperialist nation – regardless of whether it is fascist or democratic – is an agreement with slave-owners and exploiters. A temporary agreement of such nature may, of course, be rendered compulsory by circumstances. It is impossible to state once and for all time that agreements with imperialists are impermissible under all and any conditions, just as it is impossible to tell a trade union that it has no right under any conditions to conclude a compromise with the boss. “Irreconcilability” of such nature would be sheerly verbal.

So long as the workers’ state remains isolated episodic agreements with the imperialists to one extent or another are inevitable. But we must clearly understand that the question reduces itself to profiting from the antagonisms between two gangs of imperialist powers, and nothing more. There cannot even be talk of disguising such agreements by means of common idealistic slogans, for example, the common “defense of democracy,” – slogans which involve nothing but the most infamous deceit of the workers. It is essential that the workers in capitalist countries be not bound in their class-struggle against their own bourgeoisie by the empiric agreements entered into by the worker’s state. This fundamental rule was rigorously observed during the first period of the existence of the Soviet republic.

However, the question of whether agreements between a workers’ state and an imperialist state, including a Fascist one, are in general permissible, and if so, just under what conditions, – this question – in its abstract form – has lost all meaning today. In question is not a worker’s state, in general, but a degenerated and putrifying workers’ state. The nature of an agreement, its aims and its limits, depend directly upon those who conclude such an agreement. Lenin’s government might have been compelled in Brest-Litovsk to conclude a temporary agreement with Hohenzollern – in order to save the revolution. Stalin’s government is capable of entering into agreements only in the interests of the ruling Kremlin clique and only to the detriment of the interests of the international working class. The agreements between the Kremlin and the “democracies” meant for the respective sections of the Communist International the renunciation of the class struggle, the strangulation of revolutionary organizations, the support of social patriotism and, in consequence, the destruction of the Spanish revolution and sabotage of the class struggle of the French proletariat.

The agreement with Chiang Kai-Shek signified the immediate liquidation of the revolutionary peasant movement, the renunciation by the Communist party of its last vestiges of independence and the official replacement of Marxism by Sun-Yat-Senism. The semi-agreement with Poland signified the destruction of the Polish Communist Party and the annihilation of its leadership. Every agreement of the Kremlin clique with a foreign bourgeoisie is immediately directed against the proletariat of that country with which the agreement is made, as well as against the proletariat of the U.S.S.R. The Bonapartist gang in the Kremlin cannot survive except by weakening, demoralizing, and crushing the proletariat everywhere within its reach.

In Great Britain the Comintern is nowadays conducting agitation in favor of creating a “People’s Front” with the participation of the liberals. At first glance such a policy appears to be absolutely incomprehensible. The Labour Party represents a mighty organization. One could easily understand

an urge on the part of the social-patriotic Comintern to draw closer to it. But the liberals represent an utterly compromised and politically second-rate force. Moreover they are split into several groups. In the struggle to maintain their influence the Labourites naturally reject any idea of a bloc with the liberals, so as not to infect themselves with a gangrenous poison. They are defending themselves rather energetically – by means of expulsions – against the idea of a “People’s Front.”

Why Include Liberal Shadows?

Why then doesn’t the Comintern confine itself to fighting for a collaboration with the Labourites? Why does it instead invariably demand the inclusion of the liberal shadows of the past into the united front? The crux of the matter lies in this, that the policy of the Labour party is far too radical for the Kremlin. An alliance between the Communists and the Labourites might assume some shade of anti-imperialism

and would thereby render more difficult a rapprochement between Moscow and London. The presence of liberals in the “People’s Front” signifies a direct and an immediate censorship exercised by imperialism over the actions of the Labour Party. Under the cover of such a censorship Stalin would be able to render all the necessary services to British imperialism.

The fundamental trait of Stalin’s international policy in recent years has been this: that he trades in the working class movement just as he trades in oil, manganese and other goods. In this statement there is not an iota of exaggeration. Stalin looks upon the sections of the Comintern in various countries and upon the liberating struggle of the oppressed nations as so much small change in deals with imperialist powers.

When he requires the aid of France, he subjects the French proletariat to the Radical bourgeoisie. When he has to support China against Japan, he subjects the Chinese proletariat to the Kuomintang. What would he do in the event of an agreement with Hitler? Hitler, to be sure, does not particularly require Stalin’s assistance to strangle the German Communist party. The insignificant state in which the latter finds itself has moreover been assured by its entire preceding policy. But it is very likely that Stalin would agree to cut off all subsidies for illegal work in Germany. This is one of the most minor concessions that he would have to make and he would be quite willing to make it.

One should also assume that the noisy, hysterical and hollow campaign against Fascism which the Comintern has been conducting for the last few years will be slyly squelched. It is noteworthy that on February 20th when our American section mobilized considerable masses of workers to fight against the American Nazis, the Stalinists refused point-blank to participate in the counter-demonstration which had nation-wide repercussions, and did everything in their power to minimize its importance, thereby giving aid to the American followers of Hitler. What is there behind this truly treacherous policy? Is it only conservative stupidity and hatred of the Fourth International? Or is there also something new, for example, the latest instruction from Moscow – recommending to Messrs. “Anti-Fascists” that they muzzle themselves so as not to interfere with the negotiations between Moscow and Berlin diplomats? This supposition is by no means far-fetched. The next few weeks will bring their verification.

What the Agreement Would Mean

We can state one thing with certainty. The agreement between Stalin and Hitler would essentially alter nothing in the counter-revolutionary function of the Kremlin oligarchy. It would only serve to lay bare this function, make it stand out more glaringly and hasten the collapse of illusions and falsifications. Our political task does not consist in “saving” Stalin from the embraces of Hitler but in overthrowing both of them.