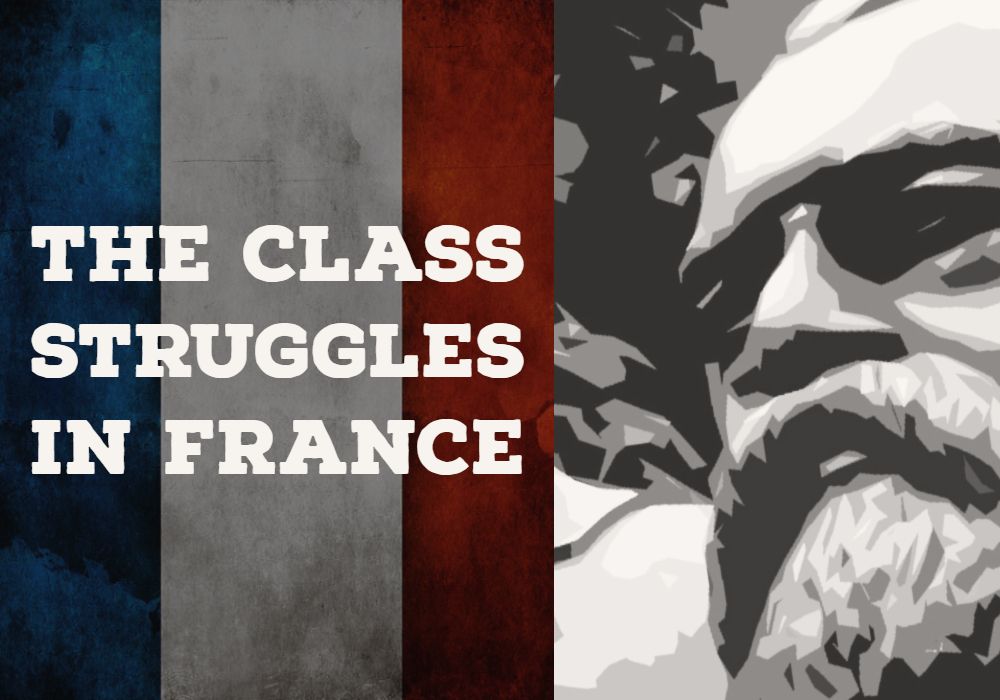 "This work was Marx's first attempt, with the aid of his materialist conception, to explain a section of contemporary history from the given economic situation. Here the question was to demonstrate the inner causal connection in the course of a development which extended over some years, a development as critical, for the whole of Europe, as it was typical; that is, in accordance with the conception of the author, to trace political events back to the effects of what are, in the last resort, economic causes." (introduction by Engels)

Physical copy of this book available from Wellred Books.

“Great importance must be attached to one of the historical documents of the German labour movement: the Preface written by Fredrick Engels for the 1895 re-issue of Marx's Class Struggles in France ... looking back upon the year 1848, he showed that the belief that the socialist revolution was imminent had become obsolete ... Engels demonstrated, as an expert in military science, that it was a pure illusion to believe that the workers could, in the existing state of military technique and of industry, and in view of the characteristics of the great towns of today, successfully bring about a revolution by street fighting.” Rosa Luxemburg, 1918.

Marx’s The Class Struggles in France, 1848 to 1850 consists of a series of articles written between January and October 1850 specially for the Neue Rheinische Zeitung. Politisch-ökonomische Revue and published in it under the general title “1848-1849.” This is a most important work summing up the results of the 1848-49 revolution. In preparation for this work, Marx used French newspaper reports, reports published in the Neue Rheinische Zeitung, and accounts given by witnesses – French and German revolutionary refugees, among them Ferdinand Wolff, the Neue Rheinische Zeitung Paris correspondent, and another Communist League member, Sebastian Seiler, who was a stenographer to the French National Assembly in 1848 and 1849 and wrote a pamphlet on the events of June 13, 1849, which he presented to Marx. Marx was also probably familiar with Ledru-Rollin’s pamphlet on the same subject.

According to the original plan the work was to consist of four articles: “The Defeat of June 1848,” “June 13, 1849,” “Repercussions of June 13 on the Continent” and “Current Situation; England.” However, in Nos. 1, 2 and 3 of the journal only three articles were published: “The Defeat of June 1848,” “June 13, 1849” and “Consequences of June 13, 1849.” The influence of the June 1849 events on the Continent and the situation in England were treated in other items of the journal. particularly in the international reviews written jointly by Marx and Engels.

The work was not reprinted in full during Marx’s lifetime. In 1895 it came out in book form in Berlin, with an Introduction by Engels. The title The Class Struggles in France, 1848 to 1850 was given by Engels and the work has since appeared under this title in various languages. In the 1895 edition, Engels added the fourth chapter, which included the sections of the third international review dealing with events in France. Engels entitled this chapter “The Abolition of Universal Suffrage in 1850.” Engels wrote to Richard Fischer on February 13, 1895, that the fourth chapter “will serve as a factual conclusion to the work as a whole, without which it would have remained a fragment.” At the same time, the headings of the first three chapters were changed: I. “From February to June 1848,” II. “From June 1848 to June 13, 1849,” III. “From June 13, 1849, to March 10, 1850.” In the present edition, the headings of the first three chapters are given according to the journal, while the heading of the fourth chapter is given as in the 1895 edition.

The publication of the series of Marx’s articles drew the attention of the press. A short announcement of No. 1 of the Neue Rheinische Zeitung. Politisch-ökonomische Revue and quotations from Marx’s work were published in the Freischütz. Hamburg, No. 40, April 2, 1850; a review in the Wochenblatt der Hornisse, Cassel, No. 3, April 15, 1850. The preface and the first article were reprinted in the Deutsche Londoner Zeitung Nos. 262, 263 and 264, April 5, 12 and 19, 1850. On January 1, 1852, the Turn-Zeitung, published by German socialist emigrants in the USA, carried an article by Joseph Weydemeyer “On the Dictatorship of the Proletariat,” written under the direct influence of Marx’s work, the first work by Marx and Engels in which the term “the dictatorship of the proletariat” was used. On the other hand, the idea of the dictatorship of the proletariat brought criticism of the author from the petty-bourgeois democrats. The Neue Deutsche Zeitung, whose editor was a former “true socialist,” Otto Luning, published a review (Nos. 148-51, June 22-23, 25 and 26. 1850) of the four numbers of the Neue Rheinische Zeitung. Politisch-ökonomische Revue with unfavourable comments on this proposition and an incorrect interpretation of it. Marx was obliged to write Lüning a special letter rebuffing attempts to distort and dispute the idea of the dictatorship of the proletariat.

Marx and Engels attached great importance to the popularisation of the ideas contained in The Class Struggles in France among the English workers. Engels used this work in his Letters from France published in The Democratic Review and, on the basis of the first article in the series, wrote Two Years of a Revolution, which was published in the same journal. Excerpts from Marx’s work were cited by his contemporaries (Hermann Becker, Proudhon).

Excerpts from The Class Struggles in France were first published in English in the journal The Marxian, New York, 1921, Vol. 1, No. 2, and it appeared in full as a separate edition by Labour News Company, New York, 1924.

In this volume, the work is published after the Neue Rheinische Zeitung. Politisch-ökonomische Revue text, checked with that of the 1895 edition prepared by Engels. The Revue published it from the manuscript and since Marx’s handwriting was difficult to decipher, mistakes cropped up. In the present edition, all changes in style, spelling, punctuation and other corrections made by Engels have been taken into account, as well as errata printed in the Neue Rheinische Zeitung. Politisch-ökonomische Revue (to the first number in the second, and to the second and third in the fourth).

Account has also been taken of the analysis, carried out by the editorial commission working on the Marx/EngeIs, Gesamtausgabe (MEGA), erste Abteilung, 10. Bd. and kindly made available to us, of the marks and corrections made by Marx and Engels in their copies of the journal. Engels’ corrections apparently date from 1895 when he republished The Class Struggles (in the 1895 edition, however, they were only partly taken into account). It is also probable that Engels intended to republish the Revue in full. Some corrections by Marx and Engels coinciding with the errata printed in the Revue have been silently inserted in the text of the present edition. Changes in meaning are indicated in footnotes.

Besides this, obviously inaccurate dates and factual data, including those in the 1850 and 1895 editions, have also been silently corrected. Comments are not usually made on Marx’s free translation of quotations, except when the words Marx puts in quotation marks are not true quotations but convey the general meaning of the cited passages.