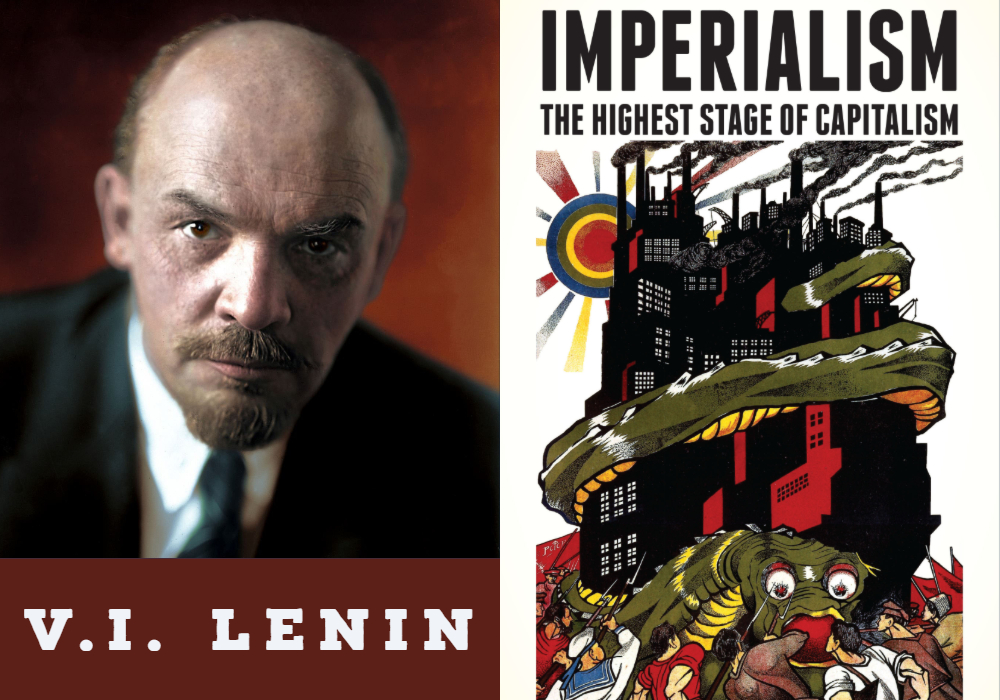 Capitalism is commodity production at its highest stage of development, when labour power itself becomes a commodity. The growth of internal exchange, and, particularly, of international exchange, is a characteristic feature of capitalism. The uneven and spasmodic development of individual enterprises, individual branches of industry and individual countries is inevitable under the capitalist system. England became a capitalist country before any other, and by the middle of the nineteenth century, having adopted free trade, claimed to be the ‘workshop of the world’, the supplier of manufactured goods to all countries, which in exchange were to keep her provided with raw materials. But in the last quarter of the nineteenth century, this monopoly was already undermined; for other countries, sheltering themselves with ‘protective’ tariffs, developed into independent capitalist states. On the threshold of the twentieth century we see the formation of a new type of monopoly: firstly, monopolist associations of capitalists in all capitalistically developed countries; secondly, the monopolist position of a few very rich countries, in which the accumulation of capital has reached gigantic proportions. An enormous ‘surplus of capital’ has arisen in the advanced countries.

It goes without saying that if capitalism could develop agriculture, which today is everywhere lagging terribly behind industry, if it could raise the living standards of the masses, who in spite of the amazing technical progress are everywhere still half-starved and poverty-stricken, there could be no question of a surplus of capital. This ‘argument’ is very often advanced by the petty-bourgeois critics of capitalism. But if capitalism did these things it would not be capitalism; for both uneven development and a semi-starvation level of existence of the masses are fundamental and inevitable conditions and constitute premises of this mode of production. As long as capitalism remains what it is, surplus capital will be utilised not for the purpose of raising the standard of living of the masses in a given country, for this would mean a decline in profits for the capitalists, but for the purpose of increasing profits by exporting capital abroad to the backward countries. In these backward countries profits are usually high, for capital is scarce, the price of land is relatively low, wages are low, raw materials are cheap. The export of capital is made possible by a number of backward countries having already been drawn into world capitalist intercourse; main railways have either been or are being built in those countries, elementary conditions for industrial development have been created, etc. The need to export capital arises from the fact that in a few countries capitalism has become ‘overripe’ and (owing to the backward state of agriculture and the poverty of the masses) capital cannot find a field for ‘profitable’ investment.

Here are the approximate figures showing the amount of capital invested abroad by the three principal countries. (See table 4.1.) This table shows that the export of capital reached enormous dimensions only at the beginning of the twentieth century. Before the war the capital invested abroad by the three principal countries amounted to between 175,000 million and 200,000 million francs. At the modest rate of 5 per cent, the income from this sum should reach from 8,000 to 10,000 million francs a year – a sound basis for the imperialist oppression and exploitation of most of the countries and nations of the world, for the capitalist parasitism of a handful of wealthy states!

How is this capital invested abroad distributed among the various countries? Where is it invested? Only an approximate answer can be given to these questions, but it is one sufficient to throw light on certain general relations and connections of modern imperialism. (See table 4.2.)

The principal spheres of investment of British capital are the British colonies, which are very large also in America (for example, Canada), not to mention Asia, etc. In this case, enormous exports of capital are bound up most closely with vast colonies, of the importance of which for imperialism I shall speak later. In the case of France, the situation is different. French capital exports are invested mainly in Europe, primarily in Russia (at least ten thousand million francs). This is mainly loan capital, government loans, and not capital invested in industrial undertakings. Unlike British colonial imperialism, French imperialism might be termed usury imperialism. In the case of Germany, we have a third type; colonies are inconsiderable, and German capital invested abroad is divided most evenly between Europe and America.

The capital-exporting countries are nearly always able to obtain certain ‘advantages’, the character of which throws light on the peculiarity of the epoch of finance capital and monopoly. The following passage, for instance, appeared in the Berlin review, Die Bank, for October 1913:

A comedy worthy of the pen of Aristophanes is lately being played on the international capital market. Numerous foreign countries, from Spain to the Balkan states, from Russia to Argentina, Brazil and China, are openly or secretly coming into the big money market with demands, sometimes very persistent, for loans. The money markets are not very bright at the moment and the political outlook is not promising. But not a single money market dares to refuse a loan for fear that its neighbour may forestall it, consent to grant a loan and so secure some reciprocal service. In these international transactions the creditor nearly always manages to secure some extra benefit: a favourable clause in a commercial treaty, a coaling station, a contract to construct a harbour, a fat concession, or an order for guns. (Die Bank, 1913, 2, pp. 1024-25.)

Finance capital has created the epoch of monopolies, and monopolies introduce everywhere monopolist principles: the utilisation of ‘connections’ for profitable transactions takes the place of competition on the open market. The most usual thing is to stipulate that part of the loan granted shall be spent on purchases in the creditor country, particularly on orders for war materials, or for ships, etc. In the course of the last two decades (1890-1910), France has very often resorted to this method. The export of capital thus becomes a means of encouraging the export of commodities. In this connection, transactions between particularly big firms assume a form which, as Schilder “mildly” puts it, “borders on corruption”. (op. cit., p. 346, p. 350, p. 371) Krupp in Germany, Schneider in France, Armstrong in Britain are instances of firms which have close connections with powerful banks and governments and which cannot easily be ‘ignored’ when a loan is being arranged.

France, when granting loans to Russia, ‘squeezed’ her in the commercial treaty of 16 September, 1905, stipulating for certain concessions to run until 1917. She did the same in the commercial treaty with Japan of 19 August, 1911. The tariff war between Austria and Serbia, which lasted, with a seven months’ interval, from 1906 to 1911, was partly caused by Austria and France competing to supply Serbia with war materials. In January 1912, Paul Deschanel stated in the Chamber of Deputies that from 1908 to 1911 French firms had supplied war materials to Serbia to the value of 45 million francs.

A report from the Austro-Hungarian Consul at Sao-Paulo (Brazil) states:

The Brazilian railways are being built chiefly by French, Belgian, British and German capital. In the financial operations connected with the construction of these railways the countries involved stipulate for orders for the necessary railway materials.

Thus, finance capital, literally, one might say, spreads its net over all countries of the world. An important role in this is played by banks founded in the colonies and by their branches. German imperialists look with envy at the ‘old’ colonial countries which have been particularly ‘successful’ in providing for themselves in this respect. In 1904, Great Britain had 50 colonial banks with 2,279 branches (in 1910 there were 72 banks with 5,449 branches), France had 20 with 136 branches; Holland, 16 with 68 branches; and Germany had ‘only’ 13 with 70 branches. (Riesser, op. cit., 4th ed., p. 375; Diouritch, p. 283.) The American capitalists, in their turn, are jealous of the English and German: “In South America,” they complained in 1915, “five German banks have forty branches and five British banks have seventy branches… Britain and Germany have invested in Argentina, Brazil, and Uruguay in the last twenty-five years approximately four thousand million dollars, and as a result together enjoy 46 per cent of the total trade of these three countries.”[1]

The capital-exporting countries have divided the world among themselves in the figurative sense of the term. But finance capital has led to the actual division of the world.

[1] The Annals of the American Academy of Political and Social Science, Vol. LIX, May 1915, p. 301. In the same volume on p. 331, we read that the well-known statistician Paish, in the last issue of the financial magazine The Statist, estimated the amount of capital exported by Britain, Germany, France, Belgium and Holland at $40,000 million, i.e., 200,000 million francs.–Lenin.