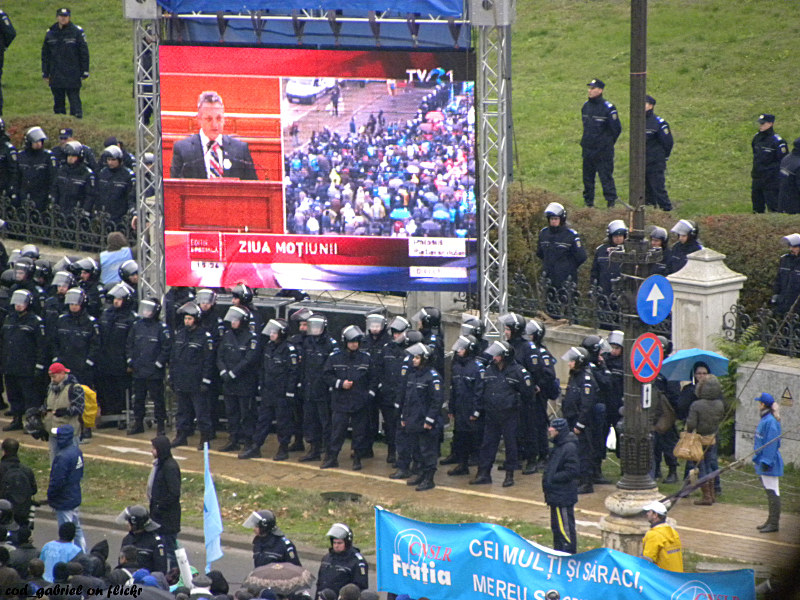 On Wednesday, October 27 a demonstration of 80,000 assembled in front of the Romanian parliament. Nurses, teachers, police officers, statisticians, electricity plant workers and many other civil servants converged on Bucharest from all over the country. At the same time inside the parliament the second vote of no confidence in ten months was being taken.

The protests mark the culmination of the third wave of strikes and protests that have shaken the country since June. All of these have been against a massive package of cuts and austerity measures that the government, backed by the IMF, is trying to implement. As we have said many times, the bourgeoisie will try to unload the weight of its crisis onto the shoulders of the workers and poor. But by doing this it will only force the masses, that will have nothing to lose, to fight back. It is clear that a new age of instability and sharp class struggle has dawned in Romania.

The world crisis, the IMF and the austerity measures

As we have reported elsewhere, the world economic crisis hit Romania in a very hard manner. From a record growth of 8.4% GDP shrunk by 7% in 2009. The crisis in the economy resulted in a budget deficit of 7% in 2009.

Practically facing a default, the government negotiated a $27bn financial “assistance package” (a loan) with the IMF, the European Commission and the World Bank. The conditions for this loan were the introduction of heavy cuts and austerity measures. These included a 25% reduction in public sector wages, a 15% cut in pensions and in general overall government spending must be cut by 20%.

The measures are cutting to the bone and are heavily undermining the living standard of the masses that have been through a lot since the fall of the hated Ceausescu regime. On top of the 3.5 million people who – due to massive privatisation – lost their jobs immediately after the fall of the Ceausescu regime, the recent recession has also meant a rise in unemployment, from 6% in 2008 to 9% in 2009, reaching 15% in 2010.

Class struggle on the rise

Police presence at demonstration. Photo: cod_gabriel on Flickr. So far the austerity measures have sparked several major protest movements. On May 19 more than 50,000 demonstrated against the cuts. On May 31 tens of thousands took to the streets again. This time workers in education, healthcare, public administration, customs and prisons all stopped work.

Again in September a new wave of strikes and demonstrations made a huge impact on the government. Thousands took the streets in different parts of the country. Municipal workers, nurses, taxi drivers took to the streets to protest against the austerity measures. In one protest, reflecting the growing militancy in the working class, a 10,000 strong demonstration called not only for the end of austerity measures, but also for the raising of the minimum wage that has been eaten into by 4.4% inflation (the highest in EU).

Another very significant protest was that of thousands of police officers marching to the President’s palace shouting “get out, you dog”. This incident forced the Minister of the Interior to resign, adding further to the political instability in Romania.

Since then the protests have continued throughout October and November. On Wednesday, October 13 about a hundred civil servants from the finance ministry temporarily trapped the Minister of Finance in his office for hours before he was evacuated. The incident sparked protests in finance ministry offices around the country. On Friday, October 22, a thousand dockyard workers marched in the Black Sea town of Mangalia, to demand higher wages. The workers were on strike for 10 days. On Monday, October 25 a thousand former army personnel protested against cuts in their pensions.

The wave of protests reached a climax on October 27 when 80,000 angry demonstrators gathered in front of parliament as a vote of no confidence was being taken against the ruling right government of Emil Bloc.

The demonstration was called by the five main unions   Cartel Alfa, the National Confederation of Free Trade Unions of Romania, CSDR, the Meridian, and the National Union Bloc. These had set up a "crisis committee", that prepared the demonstration. They called for the parliamentary opposition to support the demonstration. "We must do as the employees of Renault-Dacia in March 2008 who obtained a 34% increase in wages or like in France. Nothing is impossible," a teachers’ union stated.

The mood of the demonstration was very militant. One man wearing a military uniform told an Al Jazeera journalist: "I have come to get my money back. I took a loan on my old salary. I now have lost my job and my home. My children have moved abroad to find work. That cannot be right."

“The unions   speaking from the platform   made bold claims: of linking hands to stop the politicians leaving if the vote failed; of staying until the government quit.

“But as the vote began, the crowds began to wander away. The protest had been given permission to stay until 7pm   but then extended until 10pm. But coaches had been booked, trains had to be caught.

“There was disappointment and disillusion on the faces of many.

“This had been Bucharest's biggest protest since the last Communist dictator was chased from office in 1989.

“One man who had been there in the days of bloody chaos was angry: ‘I was shot in 1989 when we got rid of the Communists   and for what. This?’

“Another who looked tired and cold and weary was still defiant: ‘When you have thousands of people gathered, you should have told the people to storm the building to force those idiots to resign. Instead we were told to behave’.”

But despite the lack of results and dissatisfaction with the union leaders, there are no signs that the masses have given up yet. The police union in alliance with the Bulgarian police union have already planned demonstrations on Saturday – each in their respective countries.

With a margin of 13 votes the government managed to survive the vote of no confidence, but there is no sign that confidence in the government among the wider population is rising. On the contrary, the unions and the Social Democratic Party are being pushed into opposition by the immense pressures from below.

Together with the National Liberal Party, they have already called for a new vote of no confidence in the near future. The government on the other hand is increasingly paralysed and under pressure. Recently they “accidentally” voted for a bill introduced by the Social Democratic Party drastically reducing VAT on basic food products from 24% to 5%   a measure that is in clear violation of the agreement reached by the government with the IMF.

It is clear that the government does not have much room to manoeuvre and it is increasingly paralysed. This means that at some point some of the coalition partners may be forced to give in to the pressure and let the government fall. The crisis of this government is by no means over.

As we enter a new period, marked by the crisis of world capitalism, the scene is set for a sharp rise in the class struggle. The capitalists are in a tight situation as they face what is most likely to become the biggest crisis of capitalism, at least since the 1930s, if not the worst ever. The only option they have to save their economy is to unload the cost onto the shoulders of the working class. But as we have said many times, the cost of creating economic stability will be that of political instability – that is the fiercest of class struggles. Romania will be no exception.

The austerity measures implemented in Romania are similar to those that are being carried out in other European countries like Greece, France, Britain and many more. And as we can see the response of the Romanian working class is the same as in Greece, France and other countries. The working class is not going to accept these attacks without putting up a fight. It is being forced to defend itself and increasingly this defence will spill over into an offensive.

In 1989 when the totalitarian dictatorship of Ceausescu fell, the capitalist media was euphoric and presented it as a defeat for “communism”. But what fell back then was not communism or socialism; it was a monstrous caricature of a workers’ state – that is, a deformed workers state. Under Ceausescu the workers had no control over production; they had no right to change the political leaders; they had no power. Power was in the hands of a corrupt bureaucratic caste. Ceausescu became a hated figure and his regime came tumbling down.

Now the Romanian workers have had more than twenty years of capitalism, and far from solving their problems, they now see what such a system really has to offer them. A recent opinion poll carried out by CSOP and the Institute Investigating Communism Crimes and the Memory of Romanian Exile (IICMER) has revealed that 61% of Romanians consider “communism” a good idea at present, as against 53% four years ago.

This is a very significant and it expresses a considerable change in the consciousness of the Romanian workers. As the true nature of capitalist “democracy” is revealing itself before the masses, and as they are forced into struggle, they can only go in one direction and that is against capitalism. The media has attempted to portray the Ceausescu regimes as “communist”. In spite of that the ideas of genuine socialism and communism will once again be put on the order of the day. However, the Romanian workers do not want to go back to Ceausescu. What they want is a system that gives them real control over their own lives and destinies. This was also reflected in the same poll. When asked what the negative aspects of the old regime were, 69% cited the “lack of freedom”. Thus what the workers are instinctively seeking is a system that does away with the anarchy of the market, of capitalism, and where workers have a real say in economic decision-making and policies.

Reuter's report on walk out