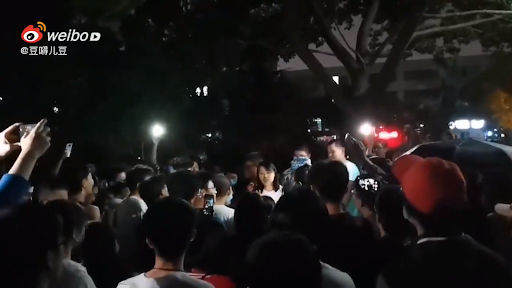 In the past week, university students all over China have been openly struggling against their school administrations for effectively confining them on campus in the name of complying with the government’s coronavirus safety instructions. These protests have been spreading like wildfire, from the capital Beijing to Fujian in the south, to Inner Mongolia in the north and beyond, engulfing thousands of campuses.

The schools’ lockdown measures would have confined millions of Chinese university students from leaving their school premises, especially those who have to live on campus. Many had to rely on food deliveries, which are very hard to receive as “no-contact” measures are enforced. Some have reported that school libraries and other facilities can only be accessed by appointment.

While being ordered to endure such draconian restrictions, the students noticed that the same rules do not apply to staff, who are allowed to freely enter and exit the school. It is widely believed that such an approach stems from a lazy, one-sided approach on the part of the schools, who are implementing these unnecessary measures on the students to show the government that they are abiding by their instructions. Hence, many protesting students are calling this farce a “formalist lockdown”.

Many schools also appear to be taking this opportunity to squeeze more cash out of their students. In many universities, the canteens, grocery stores, even barber shops within the campuses have raised their prices, knowing that the students have nowhere else to shop. 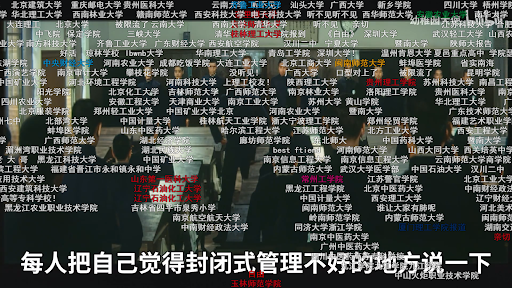 A parody video from a popular Chinese video platform Bilibili, which once ranked 10th on the website, criticizing the lockdown policy in universities. The upper text consists of names of universities, including schools from the capital Beijing to Fujian in the south to Inner Mongolia in the north. The subtitle at the bottom reads: “Every one of you, talk about what you dislike about the lockdown policy”/ Image: fair use

As the pandemic threat fades in China, many service industries such as cinema and restaurants have already returned to their regular operations. Yet, university campuses still implement harsh lockdown measures on students as school administrators scramble to abide by vague sanitation safety instructions issued by the Ministry of Education in August. These instructions are supposedly a result of online discussions between the public and the state on how to reopen the schools.

The hamfisted lockdown on students from schools across China could only be interpreted as an attempt at making profits. Discontent spread across Chinese universities and burst into a conflagration of demonstrations.

On 20 September, students in Xi'an International Studies University (西安外国语大学) in the central province of Shaanxi began a 30-minute demonstration at midnight, demanding the unlocking of the university (see video below).

And on 21 September, students at Hefei University of Technology in the southeastern province of Anhui also began a demonstration, demanding an end of the lockdown and questioning the university’s double standards towards students and staff.

Then, on 23 September, a conflict between students and school security broke out at the gate of Sichuan University of Media and Communications in Chengdu, Sichuan. Following this, waves of protests have been seen across many campuses in Chengdu (see below). 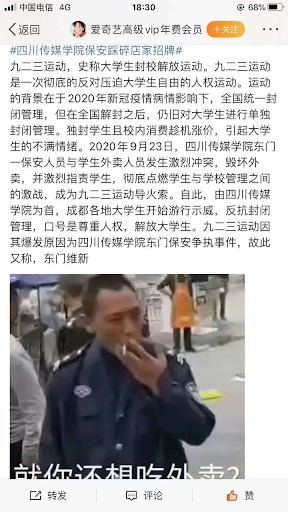 There is no doubt that the protests will escalate and more and more students from different universities will also join them, since mis-administration has been an universal phenomenon across Chinese Universities. At the time of writing, more reports of similar protests and complaints are emerging on the Chinese internet.

At the time of writing, it seems that the news of these protests has not been suppressed. This may be because the speed and ferocity of the protests means the state cannot clamp down on them in the first instance. However, most reports on this phenomenon place the entire responsibility upon the school administrators for making “formalistic” or implementing “one-size-fits-all” solutions, reducing the issue down to a problem of individual error.

The fact that the very same policy has been implemented by universities all over China in the most varied circumstances shows that a much bigger, systemic process is at play. The youth always act as a barometer for the rest of society, reflecting the real mood developing underneath the surface amongst the workers and the poor. The accumulated discontent, at the CCP dictatorship and at the neverending misery of the capitalist system, is clearly approaching a level where it must find an outlet. These protests by university students are only a sign of greater struggles to come.