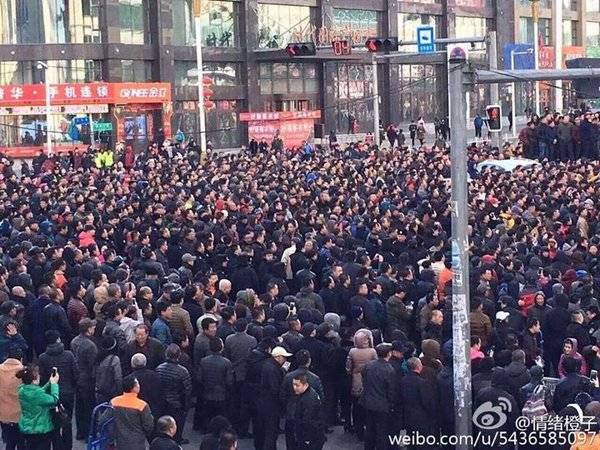 Tens of thousands of mining workers in Shuangyashan city in the Heilongjiang province in China have clashed with the police after four days of demonstrations, demanding the state-owned mining company to distribute wages owed to workers.

The Shuang Mining Corporation, a state-owned mining company which employs over 61,000 workers, is valued at 7.5 billion RMB (roughly $11 billion USD) and is listed as the 38th most prominent mining company of China. The company has reportedly been owed its workers significant amount of monthly wages since 2014. The company has only provided workers 800 RMB ($123 USD) per month for living expenses when workers were supposed to receive a monthly salary of up to 1000 RMB ($154 USD). Many reported that they have not received their salaries for over two years. Compounding this is recent wage-slashing as well as widespread failure to reimburse workers for healthcare expenses, which were promised as a part of worker’s contract with the company.

"@350: 10,000 people chant "Give me back my blue sky" to protest a planned coal-fired power plant in China. pic.twitter.com/mA1pcPhb4F" #cdnpoli

Beginning on March 9th, workers of the Shuang Mining Corporation began spontaneous mass demonstrations in the streets of Shuangyashan city. Slogans shouting and banners of “we want to live, we want to eat!" and “the Communist Party should pay us back!" have been raised. On March 12th a contingent of demonstrating workers also reportedly occupied the city’s train station, stopping trains going into Beijing. The entire city’s functioning has been significantly affected.

Since the dismantling of the planned economy in China, workers of public sector no longer are guaranteed the level of welfare and job security they used to receive. At the same time, the Chinese “Communist" Party has continued the Stalinist technique of claiming that all workers are represented by a federal union as an excuse to outlaw freedom of unionization and workers’ democracy.

While some of the major media outlets in China have reported on the worsening economic performance of Heilongjiang Province, they largely have yet to report on the workers’ demonstration in Shuangyashan. Most Chinese language reports on this incident have come from private media outlets in Hong Kong and Taiwan, though the incident also reportedly has garnered attention in Chinese social media. In the most recent update as of March 13th Beijing time, the strongly pro-Beijing Hong Kong media outlet Phoenix News claimed that Governor Lu Hao has reneged on his previous statement about not owing workers wages, though the same article made no mention of the mass demonstration that is taking place.

It has been reported that the city government has mobilized thousands of armed police to suppress the movement. A video has been leaked showing gangs of shielded police brutally beating a demonstrator. Demonstrators have threatened an even larger demonstration on the 13th. The situation continues to develop and escalate.

The crisis of global capitalism and Chinese capitalism’s own crisis of overproduction is increasingly manifesting itself with the state and the bourgeois’ assaults against the Chinese working class. The Marxist proposal of a renewed proletarian revolution, the establishment of a worker’s democracy, and the placement of key industries under democratic workers’ control is the only way for China and the world to escape the impending collapse. We encourage all those who agree with the Marxist analysis and program to join us in a stance of solidarity with the Chinese working class.