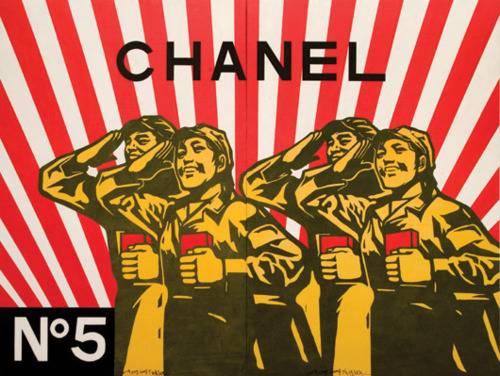 Luxury goods brands such as Louis Vuitton, Remy Martin and Bentley have posted falls both in growth and profits in the recent period, down from record highs. That the sales of luxuries have been booming in a period of global recession for the past few years appears remarkable in itself. This contradictory phenomenon, and its more recent decline, gives an insight into one aspect of the capitalist crisis.

The buoyancy of the luxury goods market can in part be explained by the growing polarisation in capitalist society. The rich have never been richer. Record numbers of millionaires are being created out of austerity. Huge swathes of capital sits idly in bank vaults because it cannot be profitably invested. The solution for the capitalists is to increase the rate of exploitation; to decrease the share of wealth going to wages, and increase the share appropriated by the bosses.

This is why records are being set in the price of art; why the price of gold has risen and why housing bubbles are emerging one again. It explains the stock market boom in a period of recession. The increase of capital invested in stock market speculation is due to the fact that profits here are higher than in industry, which is saturated by over-capacity. This fuels the drive to dismantle state-owned industries, in order to create new arenas for investment. Part of this excess capital has also kept the luxury goods market afloat. The Financial Times reports that in the past 3 years luxury goods have done the best business in at least a decade.

A large part of this is attributed to China, where according to the FT, November 26th, 2013: "Between 2010 and last year, brands from the comparatively small and exclusive Hermès to the bling of Louis Vuitton have seen the mix of China’s emerging wealth and its population’s love of all things luxury fatten an entire industry – during the leanest times almost anyone can remember."

According to Exane BNP Paribas, China now makes up a quarter of Louis Vuitton's revenue, 35% of Cartier's and 45% of Omega's. Rolls Royce sells more cars in China than anywhere else. Analysts 'Fondazione Altagamma and Bain & Company' say that the Chinese now account for 29% of all luxury customers world-wide, up from less than 5% in 2005. This is in accord with the rapid development of capitalism in China in the past ten years, but also shows the extreme concentration of wealth in a few hands.

However, the fortunes of these ultra-luxurious brands have dipped recently. Worldwide, the growth in the luxury sector - worth “€217 billion - has averaged 11% over the past three years. Growth in China was 20% in 2012.  But this growth is predicted to fall to just 4% for 2013, dragging down worldwide growth for the sector to just 2%. This demonstrates just how important China's new rich have been for the luxuries industry.

Remy Contreau, who sell $3,000 bottles of cognac, reports revenue shrinking to 287.6m euros in the third quarter of 2013. This represents a 20% fall on the same period of 2012 which the company attributes to a Chinese government crackdown on conspicuous spending weighing heavily on sales, resulting in a 'sharp slowdown in China'. A small fall in revenues in the same period for LMHV, the parent company of Louis Vuitton, has wiped 4bn euros of its market capitalization. Bentley cars sales in China fell 3%, bucking its 2013 trend of a 20% rise globally, and in contrast to its 23% increase in China in 2012.

Remy Contreau stated on Tuesday January 21st: “The campaign to promote morality in China is expected to continue to adversely affect the consumption of ultra-premium products and no significant recovery can be expected due to the Chinese New Year.”

While China is the worlds largest market for luxury goods, its GDP per capita is only number 92 internationally - on par with Albania, Bosnia and Herzegovina and the Maldives. This testifies to the enormous wealth gap existing in the country. As we have written before, this is leading to an explosive situation with an increase in struggles by the Chinese workers and peasants who are enraged by the lavish lifestyles of the rich and the powerful compared to their humble conditions.

This situation, along with the rising state debt of China, led the Chinese government to introduce a plan to rein in the most ostentatious of of China’s elite. Chinese leader Xi Jinping stated that the Communist Party must fight the "tigers and flies at the same time", that is, to root out corruption at all levels.

Under the banner of an offensive on corruption, the Chinese leadership removed Bo Xi Lai from the Politburo and from his position as party chief of Chonqing in 2012, a case we have covered in previous articles. He was an example of a 'Tiger'. But there are also cases of 'flies' - local corruption scandals such as that of Fan Jianhui, a local Communist Party secretary in Shuyuanjie village. On Feb 17th 2012 the FT reported his case. Through his position Fan had seized control of the Zhengzhou East bus station, running it as his own private business. This bus station is estimated by protestors to have been worth $6.9m in net profit to the villagers between 2006-12. Although Fan has so far not suffered consequences for his actions, the following street protests and complaints caused by his actions are the type of events that worry the ruling clique in Beijing.

In China the Stalinist bureaucracy has ushered in the capitalist mode of production. Consequently, the state bureaucracy itself must be re-moulded to serve the new economic relations. Particularly in a period where the development of the Chinese economy is being fettered by a shrinking export market, the bloated bureaucracy all the more stands as a drain on revenue and an affront to ordinary Chinese workers.

The growing disparity in China between rich and poor is fermenting instability, strikes and rebellions. It is for these reasons that the Chinese government has taken up the struggle to curb ostentatious displays of wealth, both by its parasitic caste of Mandarins well as the new and rising bourgeoisie.

A cutting down on extravagant banquets and 'gift-giving' (as a means of corruption), and a more humble lifestyle have been actively encouraged by the new Chinese government. Unfortunately for Remy Martin, Rolls Royce and Co, this policy is having an impact which is feeding through to the balance sheets of the luxury brands.

However, this is a delicate issue. The raising of this problem by the government in the public consciousness risks damaging the Communist Party's reputation further. Particularly if no real action is seen to have been taken, as with the case of Fan Jianhui and Shuyuanjie village.

Corruption is endemic at all levels of the state. 'Skimming off the top' is a normal way of life for state officials. Bo Zhiyue, of the National University of Singapore, says:

"If you define corruption as discrepancy between salary and assets, then 99.95 per cent of officials, all through different ranks, are corrupt. So it’s impossible to get rid of all of them" (FT, February 17th 2013). The parasite is so intertwined with its host, that the attempt to remove it threatens the life of the entire organism.

While the campaign against 'Tigers and Flies' may have a superficial impact, and hurt the manufacturers of luxury goods, it will not serve the Chinese government in its main task of dampening the indignation felt by ordinary Chinese towards the growing gap between the corrupt rich and ordinary poor. Corruption could be the spark that sets off the Chinese revolution.