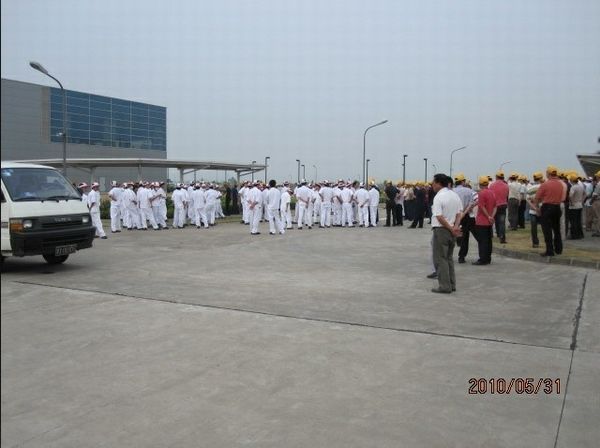 A high profile two-week long strike by 1900 workers at the Honda Motors transmission plant in China has paralysed production at Honda’s four plants in the country.

The strike started on May 17 when workers and interns at the Nanhai Honda Auto Parts Manufacturing Company in Foshan walked out demanding a significant wage increase, from 900-1200 Yuan a month to 2000-2500 Yuan. Their current wages (around 130-220 US dollars a month) are barely above the regional minimum wage, and significantly lower than workers at other auto assembly plants and those of the Japanese workers employed by Honda in China.

The workers organized through a general assembly at which they made 108 demands. At the request of management 30 representatives were elected to negotiate.

Management quickly moved in and promised to fulfill the workers demands. This was, however, a trick, as the promised wage increase was only 400 Yuan, far below what they were asking. When the workers found out that the company had sacked two of strike leaders and wanted to force the rest of the workers to sign a no-strike clause, they walked out again on May 22. The company distributed a note for the workers to sign stating that they “absolutely will not lead, organise or participate in work slowdowns, stoppages or strikes”. Now the workers added no reprisals against the strikers to their demands.

Workers then refused to send representatives to talk to management for fear of being singled out for reprisals. "We are wearing masks because the company has used cameras to photograph or video us recently," declared one of the strikers.

Even according to official company reports, the strike was solid. "Apart from section heads and upper management, most of the other workers participated in the strike," spokeswoman He Xiaowen said. "Production line workers across all posts have walked off the job." A video made by the strikers shows a mass of very young workers in their white overalls walking through the factory yard. Another shows the workers stopping three buses at a picket line and sending them back empty

The use of “just in time” production at car plants all over the world, increases the power of even small groups of workers in one factory to provoke a domino effect throughout the production chain. In this case the Foshan transmission plant workers managed to paralyse Honda’s operations in the whole of China. This is how the South Morning China Post described it:

“Guangqi Honda Automobile, a joint venture with GAC that is currently 50 per cent owned by Denway Motors, stopped production at its two Guangzhou plants on May 22. On Wednesday, production was halted at Wuhan-based Dongfeng Honda Automobile, a joint venture with Dongfeng Motor Group, and at Honda Motors (China), an export-only unit controlled by the Japanese firm and based in Guangzhou.”

It is significant that the strike was organised by the workers themselves without any participation by the official trade union structures of the All China Federation of Trade Unions. “They have organised this themselves,” said an executive at the Foshan factory’s union office to the Financial Times. “The official union leaders are useless and support management,” one of the strikers said to the FT. During the struggle the workers added some demands regarding trade union democracy to their economic demands, including a complete reorganization of the trade union at Honda and the election of union chairman and other union staff.

Management, the state and the ACFTU

After nearly two weeks of disruption, on May 29 the company moved decisively to put an end to the strike, with the support of the authorities and the ACFTU “trade union” representatives, through a combination of carrots and sticks. On the one hand, it offered a substantial wage increase of between 300 and 634 Yuan and asked the workers to put an end to the strike by 9.30 am on Monday 31st. However, the company refused to reinstate two workers who had been victimized over the action taken.

Many workers refused to accept this new proposal. Then on Monday 31, the company and the local authorities attempted to divide the workforce by blackmailing the trainee workers. Teachers from the local technical schools were brought in to threaten the trainees that they would not get their diplomas if they continued the strike. The local ACFTU “trade union” officials also sent 100 people to the factory to try to force the workers to go back to work.

Management, the authorities from the local technical schools, local authorities and local ACFTU officials acted together to try to cajole the workers back to work. A report in Caing described the events in this way: There was a meeting at the canteen,

“Yamada, the general manager of Nanhai Honda, the township ACFTU, the township government and several teachers from vocational schools were at the meeting. Yamada guaranteed that they would not retaliate or dismiss any worker.”

After the meeting, workers went back to the workshop and were pressurized by the union officers to resume work:

“There were people with local ACFTU tags and yellow hats at each workshop. At the Transmission Assembly Division, the division managers requested workers to resume work one by one but this was rejected.” 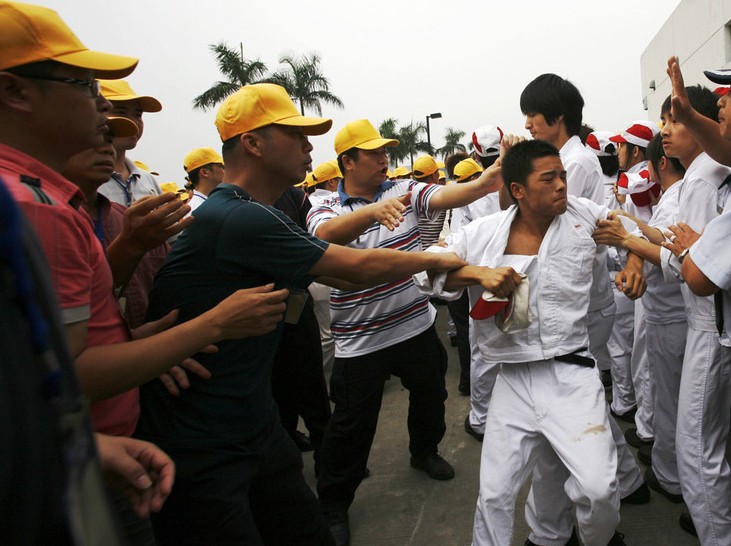 Photo by chinaworker.info. Representatives of the union were videoing as each worker was asked to return to work and most of them said no.

“The workers refused to be video-recorded by the local ACFTU and demanded that they erase their records. Several workers were then beaten up by some people from the local ACFTU during the confrontation.” (see pic, ACFTU officers with yellow caps: China Worker and Reuters)

When workers in other parts of the plant learnt about the beatings they also stopped work:

“But more workers were beaten up by the local ACFTU members near the factory gate. Two workers were knocked to the floor; their faces were bleeding. The batterers then returned to the ACFTU van. Police at the gate did not react to the whole confrontation.” (caing.com)

Even the report in the official Chinese news agency Xinhua was candid about the relationship between the state and the ACFTU when it reported: “Sources with the Nanhai district government of Foshan City said it had sent trade union officers to the plant to help resume production Monday”. You can say it louder but not clearer: the district government sent the trade union officers to the plant to help management. The ACFTU acted as an arm of the state in defence of the interests of the multinational.

The Chinese authorities might have been initially reluctant to put down this strike by force, having learnt some lessons from the protests at Tonghua Iron & Steel in July 2009. At the same time, they have been embarrassed by the high profile coverage of the suicides of workers at Foxconn. However, they cannot allow a genuine workers’ movement to emerge as it could spread like wildfire. It is worth noting that most of Honda’s operations in China are in the form of joint ventures with Chinese state-owned companies.

It is still not clear what will be the outcome of the strike. According to a report in Reuters, company representatives went to some of the workers dormitories to tell them not to go back to work on Tuesday, June 1, in order to prevent the repetition of incidents. The same 18 year old trainee worker told Reuters that “many workers were not signing the contract yet because they were still angry and wanted to see how the company responded to Monday's violence.”

Even if finally the strike is settled on the basis of the current offer by Honda, this would represent a significant pay raise and above all a victory for workers’ organization and struggle.

Wider implications of the strike

The strike has raised the alarm bells in the financial press, worried that low wage workers in China are starting to flex their industrial muscles to win decent wages and conditions, and the effect this could have in undermining their profits.

An article in the New York Times compared this strike with the wave of strikes in the auto industry in the US in the 1930s which led to the unionization of the industry.

“Transmission factories are the most expensive auto plants of all to build, because they are huge and highly automated. Each costs as much as $1 billion, more than twice the cost of an assembly plant, and typically supplies several assembly plants.”

For this reason, the NYT commented, “automakers tend to put transmission factories only in the most politically stable and strike-free countries, because a shutdown for even a day is costly. Until now, China was seen as a safe bet.”

"This is the second generation of migrant workers, and they want similar jobs and lifestyle as regular employees. (This strike) will be an example for other workers in China. This is quite a significant trend," said Zhang Chenhao, a China equities analyst with JLM Pacific Epoch. “Japan is starting to realize that the age of cheap wages in China is coming to an end, and companies that looked to China only for lower costs need to change course,” said Tomoo Marukawa, a specialist on the Chinese economy at Tokyo University.

Workers at Honda used internet chat rooms and other social networks and new technologies to help them organise the strike and keep in touch. These are a new generation of young, tech-savvy workers, different from the first generation of migrants from the rural areas.

The strike at Honda is potentially very dangerous from the point of view of the multinational companies and the Chinese state, as it could serve as an inspiration for other groups of workers. There are already reports that workers at Hyundai Motor auto-parts plant near Beijing also walked out on strike at the weekend and they were quickly offered substantial wage rises.

The Honda strike also highlights the issue of low wages in China which affects tens of millions of workers. A recent report in China Daily explained how the participation of wages in total GDP had been shrinking for 22 consecutive years, decreasing from 56.5 percent in 1983 to 36.7 percent in 2005, showing how the workers have lost out overall with the restoration of capitalism.

Zhang Jianguo, a leading official at the All-China Federation of Trade Unions (ACFTU), “also warned that low pay, long working hours and poor working conditions for millions of workers are triggering conflicts and mass incidents”. He was not so much worried about workers’ rights and conditions per se, but the fact that this could “pose a grave challenge to social stability.”

Despite the country’s sustained economic growth,

“one-quarter of respondents in the latest ACFTU survey said their incomes have not increased in the past five years, while 75.2 percent of them said that current income distribution is not fair. Similarly, 61 percent of those polled said the wages of laborers were low.”

As the anniversary of Tiananmen approaches, the emergence of a genuine class struggle workers movement, which was destroyed in its infancy in 1989, now is again on the order of the day. The Chinese state, the capitalists and the multinationals are right to be worried.