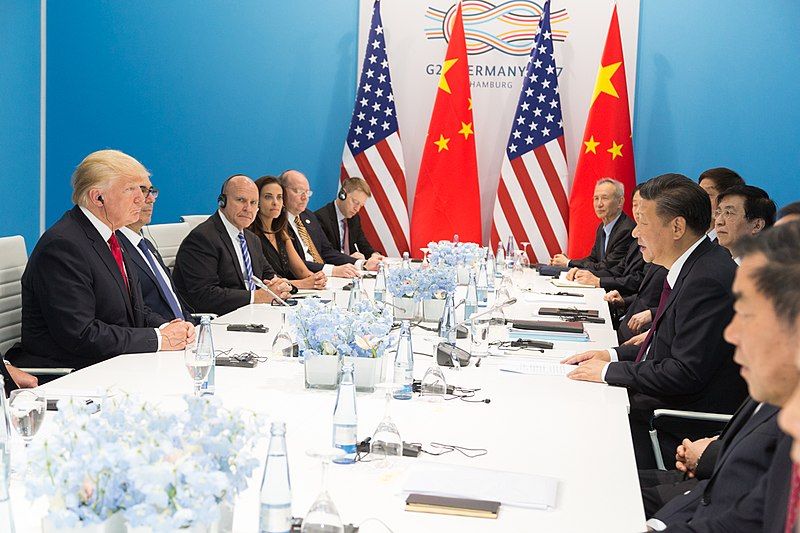 World politics is a never-ending drama with Trump as President of the United States. From the G7 bust-up to the North Korea negotiations, he never fails to create waves. Now Trump is preparing a full-scale trade war with China, with potentially devastating consequences for the world economy.

Trump’s first batch of tariffs has now been announced, meaning that Chinese exports worth $46bn in 2017 will face 25 percent tariffs. The list was immediately followed by an announcement from the Chinese government that it would retaliate with 25 percent tariffs on $45bn worth of products, two-thirds of which will come into effect on 6 July.

The reaction to these tariffs has been markedly different compared to that towards tariffs levelled against Europe. The Europeans, unsurprisingly, are far less worried about tariffs on the Chinese than on themselves. Similarly, the US ruling class (via its press), which was hostile to the tariffs on the G7 countries, is more sanguine about the tariffs on China.

As we explained in March, the US ruling class (as well as that of Europe and Japan) is worried about China developing new, high-tech production. They’re particularly worried about Chinese state aid to high-tech sectors. The fear is that China will be able to compete in industries where the advanced capitalist countries have had an advantage up until now. It’s one thing for the Chinese to produce cheap, labour-intensive products, or assemble components that were produced elsewhere; it’s another for them to produce high-tech components and machinery.

The G7 countries that are voicing concern over this are of course completely hypocritical. Most of them developed their industries with a lot of state support, and they continue to do so. Take Tesla, for example, which has received $3-4bn in state subsidies (depending on how you count) according to Good Jobs First. Boeing, another important company, has managed to rack up $14bn in subsidies, plus an additional $74bn in loans. The EU managed to get a WTO ruling against its Airbus subsidies last month, where $22bn of its subsidies in 2004 (WTO rulings are a slow process) were deemed contrary to WTO rules. There are many other subsidies that are not counted, such as government contracts, spending on research in universities and so on.

The other accusation levelled against the Chinese is that they don’t respect intellectual property. It’s impossible to know the exact level of intellectual property theft by Chinese companies but given that they’re starting from a lower technological position, they probably are stealing more than others. Wikileaks showed how the US was conducting massive espionage against its allies with the aim of giving companies like Boeing a competitive edge. So, the US knows how it’s done. 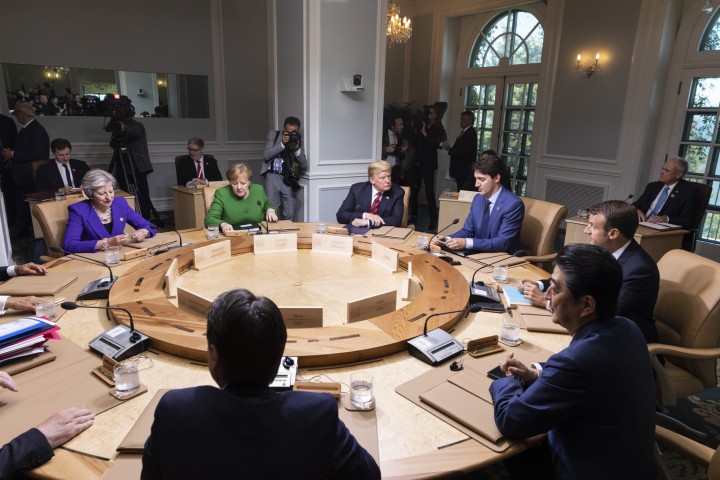 Many of the concerns raised by G7 countries against China hypocritically overlook the 'anti-competitive' ways they built their own economies / Image: Flickr, White House

One not so well-known benefit Britain derived from its empire in the 19th century was the ability to acquire the most advanced technology from other parts of the world and put it to work on an industrial scale. The British borrowed technology from other parts of the world, undoubtedly without paying a penny in royalties. Similarly, multinational agri-businesses have been stealing seeds from farmers in the recent period.

Of course, when the Chinese do it, it’s theft, when the West does it, it’s business. Rather than sharing out the wealth of human progress with the Chinese, the imperialist powers would like to keep their competitive edge and force the Chinese to work with yesterday’s technologies. In fact, the US has a number of restrictions on exporting technology to China. So, this is not really a question of right or wrong, but an attempt to keep the Chinese capitalists from producing products that require the most advanced technology.

The Europeans have for some time been quite keen to work with the US on this question. This is one of the reasons the US bourgeoisie is annoyed with Trump. It would be far easier to bring the Chinese to heel if the G7 countries could present a united front against China. Trump’s spat with the main US allies makes that impossible. Now the US will have to attempt to deal with the Chinese on its own.

Disagreements within US bourgeoisie

There has been criticism of Trump’s policy in US ruling circles, but it’s mainly in the realm of how Trump is fighting the trade war, rather than the fact he is fighting it. A section wants to push even harder than Trump. The Senate has just passed a bill attempting to block Trump’s deal with ZTE (the Chinese mobile manufacturer that supposedly broke Iran sanctions) and mentions Huawei (Chinese telecoms giant) as a national security threat. The bill passed 85 votes to 10.

Trump’s personal grudge doesn’t seem to be so much intellectual property and high-tech industries. Rather, he is concerned with the trade deficit. This is not much of a concern to the US bourgeoisie, which is benefitting immensely from cheap labour in China. 43 percent of Chinese exports are by foreign-owned firms, concentrated in computers and other electronics. Apple’s super-profits would be severely cut if it had to pay US wages instead of the Chinese rate to make its electronics, for example. The trade deficit, if anything, is a good thing for the US bourgeoisie. 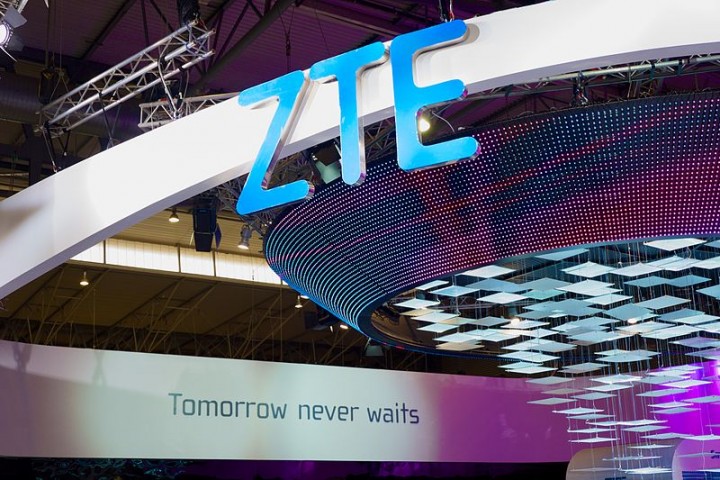 This is also reflected in the types of goods that are affected by the tariffs. The big multinational companies were very worried that the tariffs were going to cause problems for them and lobbied hard to stop the tariffs affecting consumer goods. The Peterson Institute for International Economics crunched the numbers and found that the original draft proposal of goods to be affected by tariffs included 12 percent consumer goods, but the list released on 15 June only had 1 percent. Instead of consumer goods, intermediary goods like semiconductors (a key component in all electronics) and plastics were added to the list. Trump stated that the tariffs will target goods that “contain industrially significant technologies”.

Although the big, US multinationals have saved themselves from the worst of the tariffs, they’re likely to be affected by Chinese retaliation. China has retaliated with tariffs on agricultural products, chemicals, oil, coal, and cars. This is partly targeted towards Republican-supporting areas, but it is also a reflection of China’s relatively weak position when it comes to a potential tariff war. Much of the remaining goods are precisely those parts that China is unable to produce at the moment, and where the US is at an advantage. Retaliation is therefore probably going to be restricted to bureaucratic obstacles for US companies. Qualcomm, for example, is trying to purchase a Dutch Semiconductor producer NXP, and the Chinese could stop the transaction, particularly if the Senate manages to block a deal on ZTE.

On their own, the tariffs proposed ($50bn) aren’t a disaster to the world economy. However, a number of commentators, although generally in favour of putting pressure on China, are worried about the broader effects the tariffs might create. As George Magnus, the former Chief Economist at UBS put it:

"The economic and political consequences of a trade war are more corrosive than simple maths suggest, and escalation will undermine business confidence and raise prices and job losses."

At the moment, the tariffs haven’t been implemented. There is some scope for negotiations but it’s unlikely that the two sides will reach any kind of deal in the near future. More likely, the present measures will be followed by a further escalation of tension as Trump starts drawing up another list of $200bn worth of goods to tax. This will inevitably hit major US multinational companies that assemble or produce goods in China and it will serve to make consumer goods more expensive. The Chinese will have to respond, but with administrative measures, and possibly by currency devaluation. If such an escalation takes place, it would have serious consequences for the world economy. 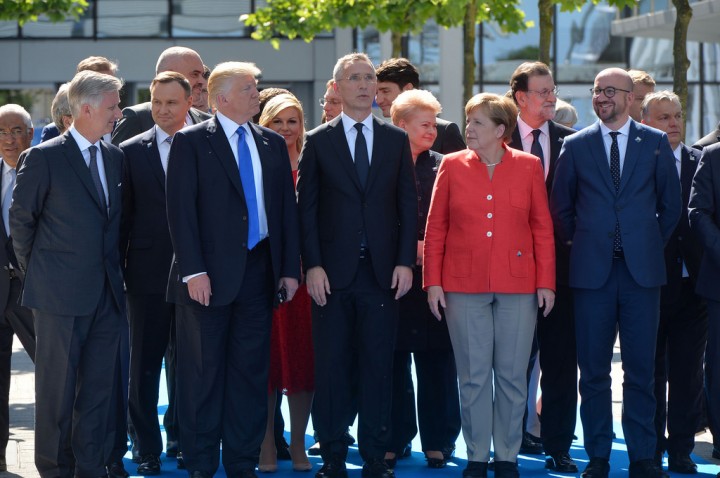 Protectionist tensions reflect contradictions between the main imperialist powers arising out of the crisis of world capitalism / Image: Flickr, NATO

Trump is attempting to readjust the US’s trading relations with the rest of the world, at the expense of the rest of the world. Using the economic might of the US, he’s attempting to force concessions from his trading partners. At least in part, he’s supported by the US ruling class. This is having a tremendously disruptive effect on world relations. It’s upsetting long-established alliances and escalating tensions elsewhere. The IMF declared politics as the biggest risk to the world economy in 2018. They weren’t far off the mark.

In the past this would have led to war; but nuclear weapons, the strength of the working class and the overwhelming military might of the US, mean that an open, armed conflict between the major powers is ruled out. Instead, they will have to resort to other forms of conflict, such as proxy wars, but also economic warfare, which is what the Trump is attempting to wage on the Chinese.

These protectionist tensions reflect contradictions between the main imperialist powers arising out of the crisis of world capitalism. The crisis sharpens competition over market shares between the imperialist powers. At the same time, it also sharpens the social contradictions within these nations as austerity bites. The latter also leads to a destabilising of the political regime, with the ruling class unable to control its own representatives in government. Trump, Brexit and the recent Italian elections are all examples of this. The consequence is a vicious circle, which the bourgeois will find very difficult to break.

Trump is a protectionist but his actions only reflect greater historical forces at play. He is both a result of the end of the post-war trade consensus and another nail in its coffin. In reality, his liberal opponents have no alternative to his policies. In fact, they seem inclined to cheer him on half the time. In the end, they only reflect the impasse of an economic system that should have been overthrown a long time ago.