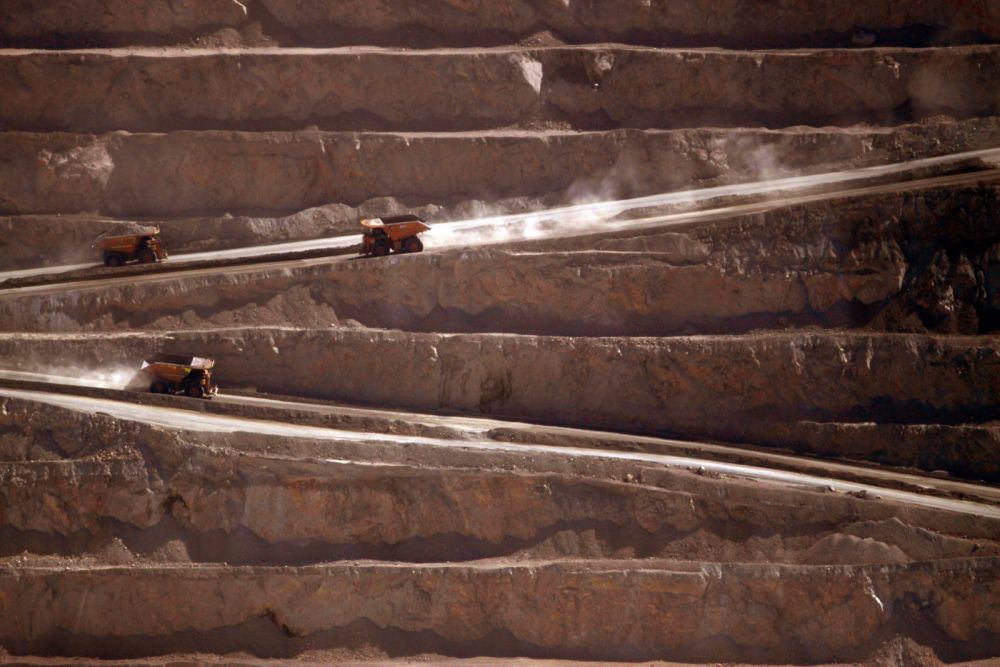 46 years ago during Salvador Allende’s government, the Chilean Congress voted unanimously for the nationalization of Chilean copper. During the murderous Pinochet dictatorship, the road was open for foreign investment, which in actuality takes more than two thirds of the benefits produced by the exploitation of this resource and those who work it. Nevertheless, what is left over, still constitutes 13% of Chile’s GDP, and has been called ‘the salary of Chile’. While the state company CODELCO is the largest producer of mine copper in the world, the surface mine with the largest copper production in the world is Minera Escondida, controlled by BHP Billiton.

2,500 workers from Labour Union No1 from this company find themselves in an indefinite strike, which began this past 7 of February, more than a month ago. They have been mobilizing against the offensive by the anglo-australian transnational, which wants to take away benefits previously agreed on, reduce wages by 14%, and cut break times, during and outside the working day. All of this to generate more utilities, denounces Carlos Allendes, the union’s spokesperson. The workers demand a wage increase of 7%, as well as an end-of-strike bonus of 25 million chilean pesos, equal benefits between new and older workers, and of course, as a minimum to begin negotiations, the upholding of the previously accorded agreements. The strike was voted with 99% support by the workers and already surpasses the historic strike of 2006. The miners have been camping in the desert, at more than 3,000 meters above sea level, doing ‘7x7’ turns to maintain a strike that they threaten could last at least 60 days. Already having surpassed a month on strike is an important achievement, for at this moment the company is allowed by law to offer individual contracts to workers, as a tactic to break the strike. Nonetheless, morale and unity among the workers remain high.

Being a mine that produces 1,200,000 tonnes of copper every year, the economic importance of this struggle is evident. Two months on strike would suppose a loss of around one billion dollars. At the same time, this strike sets the bar for future mobilizations for collective negotiations in the same sector that are still to come this year. All of this in a climate of mass layoffs in the area, which for years has suffered the effects of the Chinese economic deceleration (China is the main purchaser of copper), as well as the damage in regards to the arbitrary fixing of the price of copper concentrate in the metal stock exchange, and the insufficient capacity to melt down this concentrate to obtain refined copper in Chile of higher value (a productive role which China has been increasing in the last decade based on the consumption of Chilean concentrate). Despite these factors, the immediate period has seen a stabilisation of the price of copper, caused by the election of Trump and an increase in consumption on the part China.

The most affected by crisis in this sector are the subcontracted workers, who are more vulnerable to layoffs and exposed to the anti-worker labour code inherited from the dictatorship. In this sense, the strike at Escondida is a key bridgehead before the soon-to-be-effective, labour reform cooked up by the right wing and the New Majority in the government (a coalition which groups together from the Christian Democracy, through to the Socialist Party, up to the Communist Party). Among other things, the new Labour Code allows the company, if the subcontracted workers go on strike, to hire another company to provide the services, in effect legalising scabbing to break strikes. This is a critical point to keep in mind in the present mobilization at Minera Escondida. The company has already tried to bring in groups of subcontracted workers to act as strikebreakers, and is accusing the workers of not allowing the strikebreakers to enter the mine. This is the gash that the bosses try to employ to pit plant workers and subcontracted against each other.

The company has presented many obstacles to distract the attention of the workers during the discussions. Malicious rumours have surfaced of conversations between the Direccion del Trabajo - a mediating body within the department of labour - and the labour union predicting a quick resolution to the conflict and discrediting the workers before the whole country. Meanwhile, the minister of Mining, Aurora Williams, is in Toronto at the PDAC 2017, a fair for mine exploitation, the largest in the world of its kind, “selling” the exploitation rate in Chile under the brand of a country that “possesses a legal institutionality which provides assurance and stability for private and foreign investors... a tributary reform responsible for financing better education, improvement of labour relations”

But the copper industry is by tradition a focal point of the class struggle in Chile. The industry and the people working there have been a part of all major struggles. From the student struggle of 2011 for Free Education, to the most recent NO+AFP movement which is fighting to end the private pension system (also inherited from the dictatorship) the question of copper has always been present. “The copper is ours”, say the miners who are facing off the transnationals, “copper to finance education” said the students and workers throughout the massive education mobilisations. There is a clear consciousness which links specific demands of different sectors (free education, a state pension system) with the need to nationalise copper.

The scandalous reality is however also, that even the little part of mining which the state does posses, “the salary of Chile” as it is commonly referred to, is funnelled into the Armed Forces and Carabineros, who retire with much higher pensions than those who retire with the AFP. These are the same people who repress the working class; who just to mention one example, in 2015 shot down the subcontracted worker Nelson Quichillao during the taking of the El Salvador mine. The same people who murdered the student Manuel Gutierrez in 2011; who persecute, jail, torture, and murder the Mapuche people. The list is too long. The “Salary of Chile” is being spent on the capitalist state apparatus which oppresses the working class.

The current miners strike at Minera Escondida cannot be looked at as an isolated labour conflict, but as a struggle which is a crucial one for all of the Chilean working class and the youth. This struggle must take up the slogan of “the copper is ours”, which go back to the fierce struggle in the northern saltpeter mines 100 years ago. The working class in Chile should see the struggle of the miners of Escondida as theirs and must give them full support. The youth and workers must mobilize on a national level to demand that Minera Escondida fulfils the just demands of the miners. Additionally, we must raise the demand of the re-nationalization of the copper industry under worker’s control - without compensation for the big multinationals.

For the fulfilment of all the demands proposed by the Labour Union No1 of Escondida!