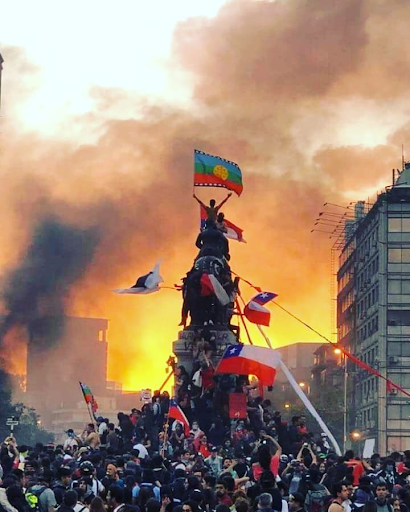 The Chilean masses must use the upcoming national plebiscite on constitutional reform to deal a hard blow against the hated Piñera regime and Pinochetist conservatism, and must not retreat from the streets but press even harder to win their dignity.

On 18 October 2019, a new stage was opened in post-dictatorship Chile. The Chilean Red October uprising had been anticipated by massive student demonstrations in 2006 and 2011, which raised concrete demands of a free and quality public education, but which also expressed much broader frustration and discontent. The protests that began at the end of last year reflect the collapse of an extreme capitalist system, imposed by blood and fire during the Pinochet dictatorship, and maintained on the basis of rigging, corruption and repression for the 30 years that followed the fall of the regime. The slogan "Until life is worth living" encapsulates the depth of change that the masses demand and their determination to fight until they achieve it. This irreducible will of the Chilean people could not be broken even with the most brutal repression deployed by the carabineros and the armed forces, which left behind a bloody trail of deaths, mutilation and torture, and only temporarily subsided after the unforeseen appearance of the COVID-19 pandemic.

While the right wing in power sought to put out the fire with the fuel of police repression, the criminalisation of protest, and a disinformation campaign launched through a mass media that is servile to the interests of the potentates; the parliamentary opposition, from the parties of the ex-Concertation (Concertación) to the reformists of the Broad Front (Frente Amplio), including the Communist Party, tried to capitalise on the legitimate popular mobilization for their petty partisan interests. Attempting to appropriate the leadership of the movement, they distorted the real meaning and dimensions of the protests through mellifluous and conciliatory language, to completely empty it of radical and militant content. On 15 November, President Sebastián Piñera was hanging by a thread before the growing clamor for his resignation, with elements of popular organisation becoming the germs of dual power. The marginalised and disoriented political class, gathered surreptitiously in the offices of the National Parliament, played the last card available to rescue the bourgeois-democratic regime: a transversal agreement on a plebiscite for constitutional change. They were ready to drop the reviled Pinochet's Constitution in order to protect the social-economic system and funnel popular protest through the safe channels of bourgeois-democratic institutions. In fact, the first point of the agreement established that "The parties that sign this agreement come to guarantee their commitment to the restoration of peace and public order in Chile."

However, this pact, which did not involve the participation of any organisations of the mobilised masses, tried to make everything "tied up, and well tied up" from the beginning. First, they deferred the Constituent Process for a period that would last until mid-2022 at least, and whose rules would be defined from the beginning by the discredited parliament. Second, the election of representatives to an eventual "Constituent Convention" (they repudiated the symbolic name of Constituent Assembly), would be elected under the same electoral system for parliamentarians, that is, with an overwhelming preponderance for the existing political parties and their electoral machines (which are abhorred by people) and marginalising popular organisations to a merely decorative status. This would, in short, be a second parliament. Finally, a quorum of 2/3 was set for the approval of decisions, that is, giving the power of veto to the minority, making any possibility of real change extremely difficult.

But more importantly, this agreement tries to sow illusions amongst the workers that the simple change of an old Constitution for a new one, by itself, will solve the urgent demands raised by an entire country: comprehensive health for all, free and quality education, the right to decent housing, fair wages and pensions, guaranteed reproductive rights, snatching water from private hands, the right of indigenous peoples to self-determination, etc. It is important that as Marxists we do not buy into these illusions, and we must be fully aware that not even the most democratic of constitutions will allow the construction of an egalitarian society, if it is framed within bourgeois institutions. As long as a handful of businessmen and multinationals control the economy and natural resources, there will be no resources for health, education or pensions. For the letter to become reality, it is necessary for the working class to take power and destroy all vestiges of the capitalist system right down to its foundations, expropriating the capitalists. For this, the existence of a mass revolutionary party is necessary, to lead the process of transforming society with the democratic participation of the workers. In Chile, that party does not yet exist, which was evidenced in the lack of leadership of the October insurrectionary movement. As long as this fails to emerge, our mission is to promote the organisation of working people outside the bourgeois institutions, through the development of existing elements such as self-convened territorial assemblies, popular councils, constituent leaderships, unions, student federations, women’s organisations, among others. In answer to the call of the political parties to abandon the demonstrations, so as not to "threaten the constituent process," we call for an active and rebellious presence in the streets.

With this critical attitude, and without losing focus on the ultimate goal of the Chilean people's fight, it is obvious that we are in favour of any concrete advance in the struggle for better living conditions for the workers. The centre of attention of this political struggle is now the referendum, and through it, it is important to deal a hard blow to Pinochetist conservatism, winning an overwhelming majority for "Approve". Likewise, in the election of constituents, we must support the candidates who represent the interests of the working class, and who defend the basic principles that a new constitution should contain:

Chile's working class has already awoken, and is willing to fight until its dignity is won. Join the International Marxist Tendency and help us to lay the foundations of a revolutionary mass organisation, inspired by the principles of Marxism, that carries out the transformation of society that the Chilean people demand!