Share
Tweet
Speaking to a gathering of national leaders of the PSUV on May 30, President Chavez explained that he was reading a book by Alan Woods, Bolshevism - the road to revolution, and raised a copy for everyone to see. He referred to Alan as a friend and a British Marxist theoretician. He then quoted a couple of passages from the book on the role of the revolutionary party.

Bolshevism - the road to revolution explains the history of the Bolshevik party that brought the Russian working class to power in 1917. This book, written by Alan Woods, leader of the International Marxist Tendency and a British Marxist theoretician, is above all a manual on the building of the revolutionary party today, which takes its starting point from the experience of Bolshevism. With that aim in mind, it examines the lessons of the class struggle of that period and passes them on to the new generation of revolutionaries. A confirmation of the value of this work is that it has become a political point of reference for revolutionaries throughout the world.

The fact that president Chávez is reading this book at this decisive moment of the revolution shows that the president is searching for ideas with which to advance the revolution towards socialism and the ideas of the IMT. Chávez used the book to stress various aspects while speaking to the PSUV leaders.

In two events celebrated in the context of the internal PSUV elections for the candidates of Mayors and Governors, President Chávez - in front of an audience composed mainly of PSUV leaders - said that he was reading a book by a good friend of his, Alan Woods and held up a copy of Bolshevism - the road to revolution. He read part of the book during the event that was broadcast on live TV. Trying to stress the importance of the revolutionary party, Chávez used two paragraphs from the book of Alan Woods. The first one was a quote from Trotsky at the beginning of the book and it served to underline the character of the leadership that the PSUV should have:

"In the year 1917, Russia was passing through the greatest social crisis. One can say with certainty, however, on the basis of all the lessons of history, that had there been no Bolshevik Party the immeasurable revolutionary energy of the masses would have been fruitlessly spent in sporadic explosions, and the great upheavals would have ended in the severest counter-revolutionary dictatorship. The class struggle is the prime mover of history. It needs a correct program, a firm party, a trustworthy and courageous leadership-not heroes of the drawing room and of parliamentary phrases, but revolutionists, ready to go to the very end. This is the major lesson of the October revolution."

Approaching the PSUV leaders he repeated the phrase that says; "It needs a correct program, a firm party, a trustworthy and courageous leadership-not heroes of the drawing room and of parliamentary phrases, but revolutionists, ready to go to the very end.". He said that the PSUV leaders should adapt themselves to this phrase of Trotsky.

Next day, Saturday, May 31, in the last meeting before the June 1st elections, which was also broadcast on national TV, he quoted Alan Woods' book again, reading a part of the introduction:

He stressed that he thought that the comparison with the general staff of an army was very adequate.

This is a product of the increasing influence of the ideas of the International Marxist Tendency within the Bolivarian movement. On previous occasions President Chávez has also mentioned Alan Woods in relation to the book Reason in Revolt. 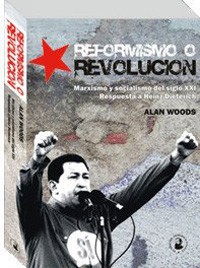 The recommendation of the book on the part of Chávez comes just two weeks before a speaking tour by Alan Woods with public meetings in Venezuela, organized by the Corriente Marxista Revolucionaria. The British Marxist theoretician is coming to Venezuela in order to present the publication of his new book Reformism or revolution - Marxism and Socialism of the 21st century. This book is a reply to Heinz Dietrich whose proposals for the Venezuelan revolution are along the line of reconciliation with the oligarchy and the spreading of confusion and a justification of the reformists' conception of Socialism of the 21st century. The book will be published in Venezuela by the Imprenta de Mérida in collaboration with the Fundacion Federico Engels.

The full programme of Alan Woods' speaking tour will be published soon on the website of the CMR.