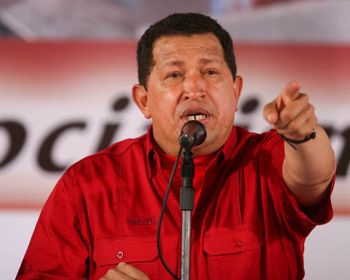 He insisted that "no crime should be left unpunished, neither this one nor any other one" and explained that the killings of trade union leaders Richard Gallardo, Carlos Requena and Luis Hernandez were an action of sicariato, a political assassination.

Referring to the Colombian owned dairy plant Alpina, he said "a certain company needs to be investigated. It is a foreign-owned company where they were fighting against the attacks of the company. I have ordered an investigation into the actions of this company." He added, "because there are companies in other parts of the world which have even used contract killings against workers' and peasant leaders, and now they want to bring these practices here. We cannot allow this in Venezuela! And we must fight strongly against it."

In a reference to the use of the Aragua police force against the workers by the former opposition governor Didalco Bolivar he said: "Isea, you have all my support to radically transform the police and the security forces of the Aragua state"

Later on in the same speech, Chavez mentioned the social and economic conflicts in Aragua and asked to be updated about the struggle of the Sanitarios Maracay workers. "All those companies where there are problems with the workers, where workers are not paid their wages, where the employers exploit the workers, or where a company closes down and does not pay its workers, or where it has become indebted and cannot pay its workers, well, they have to be recovered, nationalised, taken over". Adding "this is what socialism is, the social ownership of the means of production".

President Chávez also stressed that in this (the take over and nationalisation of companies), "the working class has a key role to play" and made an appeal to the "workers of Aragua, the working class".

This is not the first time that Chavez makes a clear appeal to the working class to take over factories to be nationalised. However in the past, the leaders of the UNT trade unions (either because they oppose workers' control or because of a sectarian approach towards the government) had not used this opportunity to launch a serious campaign of factory occupations and a nation-wide struggle for workers' control.

Only one organisation in Venezuela, the Revolutionary Front of Occupied Factories (Freteco) has made an effort to put these appeals into practice, but with limited forces. In some cases, like the struggle of Sanitarios Maracay, in Aragua, the workers did occupy the factory and actually started producing under workers' control. But the then Minister of Labour Ramon Rivero publicly refused to nationalise the company and sabotaged the struggle of the workers. The different wings in the leadership of the UNT also played a dreadful role in this struggle, some openly supporting the strike breaking role of the Minister of Labour, others (like Orlando Chirino) opposing the idea of nationalisation under workers' control and even proposing that the workers should negotiate with a different set of capitalist owners.

The struggle of the workers' at Sanitarios Maracay encapsulates the main problems of the Venezuelan revolution: the sabotage of the right wing bureaucracy in the leadership of the Bolivarian movement, the fact that the old capitalist state apparatus is still in place and was used against the workers, and the lack of a serious alternative at the head of the workers' movement.

The only way to put an end to the reactionary provocations and killings is by taking away economic and political power from the bosses, the bankers and the landlords. This is the task of the working class of Venezuela and the only way to guarantee the victory of the Bolivarian revolution.