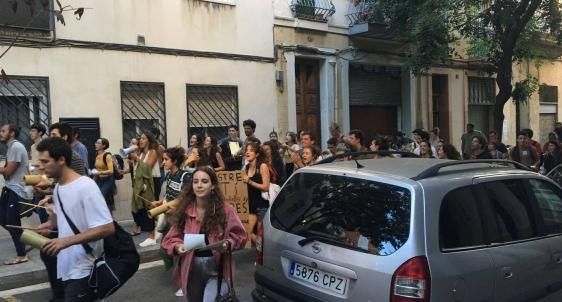 Yesterday, (Wednesday, 27 September) students in Catalonia were out on strike and on the streets in many towns and cities. High school students blocked dozens of roads and highways. Most polling centres for Sunday are schools, so the students are called on to play a decisive role in the ongoing events in the build up to the referendum on Sunday.

Walking around the neighbourhood of Poble Sec yesterday, we came across this improvised, militant demonstration of the students from the local high school (pictures below). They were shouting "fewer guns, more schools!"

Students and their parents had received warnings from the Civil Guard about the penal consequences of participating in the referendum. The Union of Headmasters, who are under pressure from the state, have asked the Catalan government (in charge of education) to be temporarily suspended so they can become more freely involved in preparing the vote.

The student strike will continue today and the universities will join it. The slogan is to occupy the schools during the strike and keep them open, in close collaboration with the local community and working class through the defence committees. The latter have been growing all over Catalonia, and now they no longer just organise pickets and propaganda teams but are preparing the actual logistics of the referendum, faced with the paralysis of the Generalitat: to keep the polling centres open, bring in the urns and the ballots, fend off the police, etc.

[See this article - in Spanish - on the development of the Committees in Defence of the Referendum, with an impressive picture of one of these committees.]

The look of the city is very impressive, and many streets and squares are full of referendum propaganda and graffiti. There have been more arrests of people preparing or distributing propaganda, while important websites have been closed (including the big civil society platform Omnium and the CUP's, very good, campaign website). The citizens called to serve at the polling stations have received warnings not to show up.

Meanwhile, in this scenario the mass movement on the streets is gaining traction. Furthermore, the slogan of the general strike on the 3rd is catching on. Only the CGT and other minor unions are backing it, not CCOO or UGT, but the CGT, while small, is influential in important sectors in Catalonia, and in a context of extreme social tension the strike could have a big following.

There are several indications of this. The peasants’ union has also been mobilising over the past few days, and has called on all farmers to come out with their tractors and take them to the polling centres on Friday two days ahead of the referendum to prevent police attempts to seal off polling stations. The firefighters have joined the fight. See their impressive arrival at the student rally this morning in Barcelona. Their union has committed to protecting the pickets on October 1.

A big round of repression on Sunday is in the offing. In this context, the Mossos, the Catalan police, are coming under enormous pressure due to the preposterous provocations by the state (closing down schools, intimidating headmasters, demanding submission to the Civil Guard command, etc.), which could open up cracks within the repressive apparatus itself.

In the present conditions this could generate an insurrectionary situation, especially if the state security forces over-react and there is bloodshed on the streets.