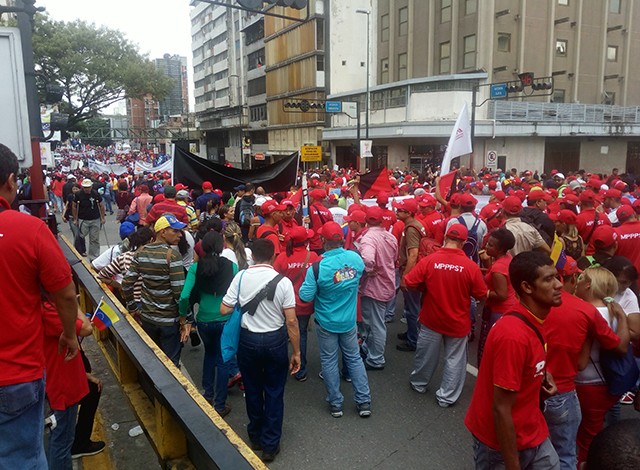 On May Day, hundreds of thousands marched in Caracas in defence of workers' rights and the Bolivarian revolution. The mass media internationally, which has been paying a lot of attention to Venezuela and had correspondents in Caracas at the time, was unanimous in its silencing of this demonstration. Here's my account.

We had spent the night at the Casa de la JOC (Catholic Workers' Youth House) in El Guarataro, a working class neighbourhood in the West of Caracas. We made our way to Parque Central in the centre of Caracas where there were already people who had arrived from other states after travelling overnight to attend the demonstration. Then we walked to El Rincon del Taxista in Agua Salud, one of three meeting points for the Bolivarian march. The route is 4.5km across the centre of Caracas, travelling via Avenida Universidad, along the National Assembly, up Avenida Baralt, onto Llaguno Bridge and then across Miraflores Presidential Palace and onto Avenida Sucre until Agua Salud. This was 10 am and the whole of our route was already a constant stream of people, with banners, red shirts and caps, going up and down towards the demonstration or joining other, smaller, local rallying points. Puente Llaguno itself, where sharp-shooters were used during the coup in April 2002, was already packed. It was clear already that this was going to be a large demonstration. There was for instance a large gathering of workers at the Presidential Palace, conducting their own rally and shouting slogans. 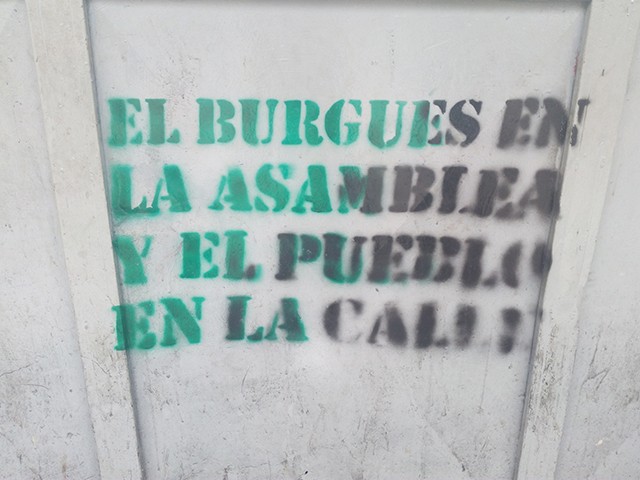 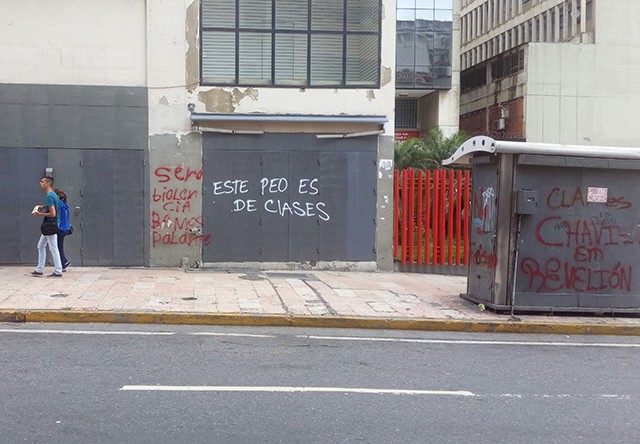 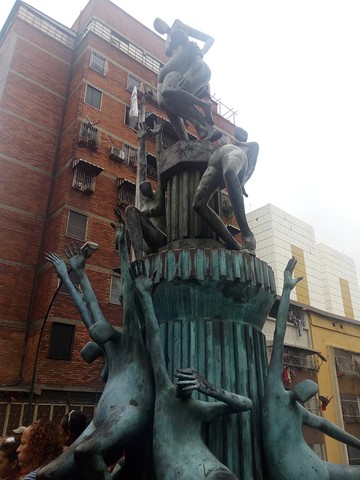 We finally arrived at Agua Salud, wedged between the working class chavista neighbourhoods of Catia and 23 de Enero where there was already a sizeable crowd. Workers from different factories and workplaces with their own banners. Members of communal councils with their own demands. A large delegation arrived from the nearby state of Vargas. 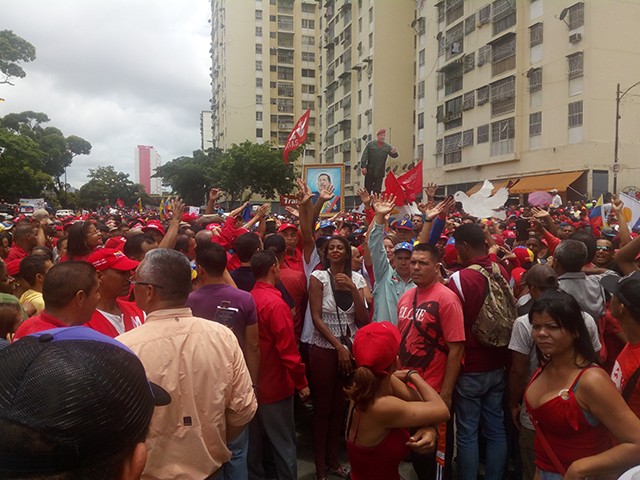 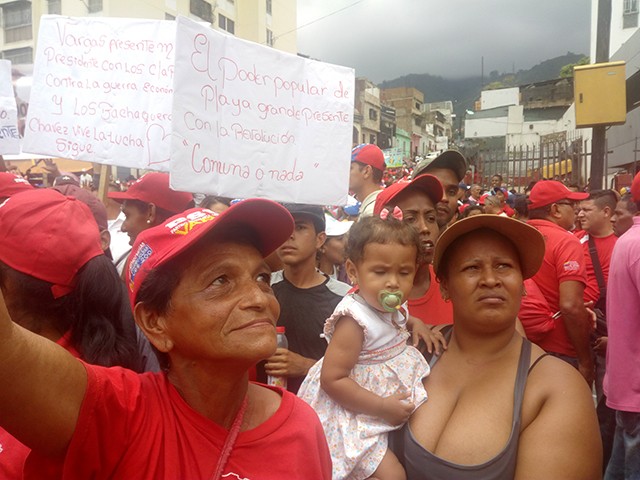 Bolivarian demonstrations are always lively, with music and dancing. At the sound of tambor music people made a circle and took turns to join in the dancing.

Comrades from Lucha de Clases arrived from different parts of the city arrived and got their banners ready. At about 1 pm we started to march up Avenida Sucre towards the Miraflores Palace. The march was extremely lively, with lots of slogans and music. We were near the front of the demonstration but as people kept joining in and we absorbed other rallying points, by the time we passed Miraflores Palace, the crowd extended, in a compact formation, all the way down Puente Llaguno and beyond. 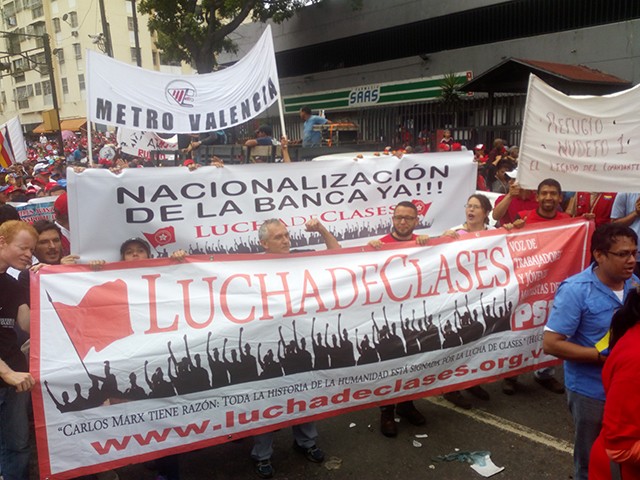 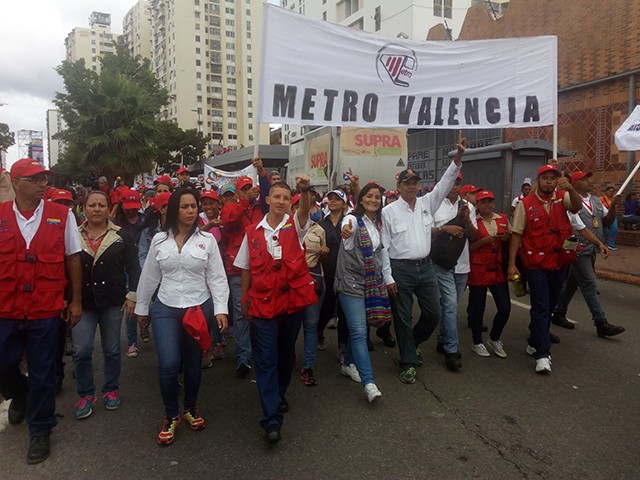 Finally we arrived at Bolivar Avenue at about 2.30. It was completely packed and it was difficult to go across. We saw a sizeable contingent from the Tupamaros as well as the Alexis Vive Collective from the 23 de Enero, whose main slogan was "Comuna o Nada" (Commune or Nothing). We managed to get across and moved closer to the stage until we got to the front of the Architecture Museum. It was at this point that I took a panoramic picture and video. The whole of Bolivar Avenue was packed, almost 1.5 km full of workers, people from poor and working class communities, etc. Not only that, but there was also a constant stream of people arriving and people leaving, meaning the Bolivar Avenue was filled probably a few times over, as well as some adjacent streets. 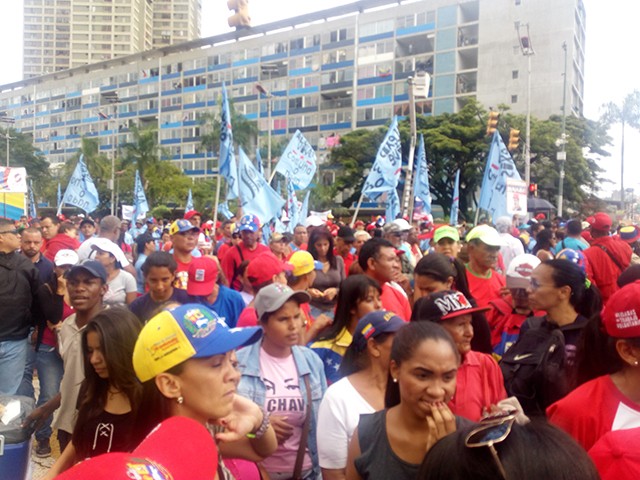 It was not until after 4pm that president Maduro addressed the rally and he started by paying homage to the Chicago Martyrs. The crowd was still there, as compact as before and did not leave until the end of the speech.

This was certainly a huge march, probably the same size as the April 19 one (which was also not reported in the mass media - see PICTURE GALLERY HERE).

Some opposition commentators have talked about people being forced to attend the demo, but interestingly an opposition blogger went to the march to try to find some evidence for that ... and couldn't find any! (read the article here)