A recent edition of The Economist (April 7, 2011) complained about “Capitalism’s waning popularity”. One does not have to be a genius to understand that thirty years or more of cuts in welfare, large scale privatizations and constant pressure on workers in the workplace was sooner or later going to end up with ordinary working people questioning the system that is responsible for these policies, i.e. capitalism. 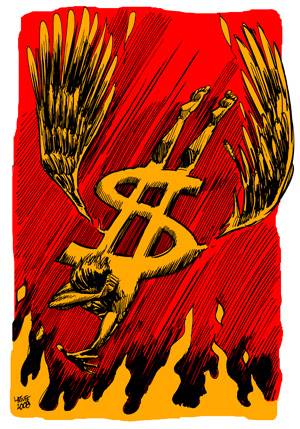 The article opens up with the following: “Rising debt and lost output are the common measures of the cost of the financial crisis. But a new global opinion poll shows another, perhaps more serious form of damage: falling public support for capitalism.” (The poll the article is referring to is available here.)

The more intelligent strategists of capital look at such polls seriously, and for a very good reason. They understand that if millions of people consider their system a good one, one that “delivers”, i.e. one that provides a reasonable living and one that appears to have a good future, then their system is safe. The capitalist class does not hold onto power merely by controlling the state apparatus, the police, the army and the judiciary, the mass media and the education system.

It also needs to keep a grip on the consciousness of millions of ordinary working people and make them believe that in spite of all its vices capitalism is the best of all possible socio-economic systems. However, even control of the state, the media and the education system is not enough for this nice cosy set up to remain unshaken. All these other means of control break down if the system is not capable of providing at least a reasonable, tolerable existence for the majority of the people.

Workers can take quite a lot, so long as they can get on with paying the rent or the mortgage, putting enough food on the table for their families, having a decent education system, healthcare system and so on. They can even accept some degree of loss of such services. They can grudgingly accept what their trade union or party leaders say when they present such attacks as “temporary” and as a price to be paid for improving things in the future.

The point is that there is a limit to all this. If such a situation is prolonged, if the calls for workers to make sacrifices is repeated over and over again, and if in the middle of all this the world is shaken by an almighty financial crisis which then leads to growing unemployment accompanied by increasing inflation, then all the means at the disposal of the capitalist class to convince people that their system is the best possible available are no longer sufficient, and things begin to change.

The apparent “sudden” breaking out of the Arab revolution is an indication of this, as are the mass movements in the advanced capitalist countries. In France in the autumn we saw 3.5 million people take to the streets in protest at Sarkozy’s austerity measures. In Greece we have seen general strike after general strike. In Britain on March 26 we saw anything between 500,000 and 800,000 workers and youth protest against Cameron’s draconian austerity policies. This was the biggest trade union organised demonstration in the history of Britain. In the USA we saw the magnificent mobilisations in Madison, Wisconsin.

What is happening in the United States must be of real concern to the US ruling class. They were taken by surprise by the Tunisian and Egyptian revolutions, but what we saw in Wisconsin shows that revolution is not affecting only the Arab countries. It is in the air everywhere.

The Economist article points out in fact that there has been sharp change in opinions in the USA: “This is most marked in the country that used to epitomise free enterprise. In 2002, 80% of Americans agreed that the world’s best bet was the free-market system. By 2010 that support had fallen to 59%....” The sharpest drop was actually between 2009 and 2010 when it fell from over 70% to below 60%.

This figure, however, is an average across all social classes. If we look at the opinions of ordinary working people, especially those at the bottom of the ladder we see an even more marked shift in opinion. As the article continues, “Capitalism’s waning fortunes are starkly visible among Americans earning below $20,000. Their support for the free market has dropped from 76% to 44% in just one year.”

So what we have now is a majority of the lower paid US workers no longer having the illusions they may have had in the past. This is an important development in the situation in the United States and it indicates that more struggles are on the way like the one we recently saw in Wisconsin.

Maybe the US ruling class can console itself with the results for France which reveal that only 6% of the French population “strongly” supports the free market. This is a further fall from the already low 8% back in 2002. If one adds those who “somewhat agree” with the idea that capitalism is a superior system the overall figure rises to 30%, but this is still a sharp fall from the 42% figure in 2002. If we add to these figures Sarkozy’s popularity ratings which reveal that only 29% of the population are happy with his performance – his worst approval rating since he came to office in 2007 – then we can see that French capitalism is also in deep trouble. Most of Europe presents a similar picture. And even such an economic powerhouse as Japan reveals falling confidence in the capitalist system, where 50% either “strongly” or “somewhat” disagree with the idea that the market economy is the best system.

Not surprisingly, the poll also reveals that those countries where a significant majority of the population believes capitalism is working is in those countries that are presently booming, such as China, Brazil and Germany. What will happen when these economies slow down is not indicated in the polls. We can confidently predict that people’s opinions will sharply change in these countries also, as they have done in the USA and most of Europe.

The poll quoted in The Economist was carried out by GlobeScan. Its Chairman Doug Miller showed some surprise at the results when he said that: “America is the last place we would have expected to see such a sharp drop in trust in the free enterprise system. This is not good news for business.” He added that, “The poll suggests that American business is close to losing its social contract with average American families that has enabled it to prosper in the world. Inspired leadership will be needed to reverse this trend.”

This sharp turn in opinions in the biggest and most powerful country in the world bodes well for the class struggle in the coming period. Gone are the days when the USA was the country of the “American Dream” where everyone was supposed to be able to become successful through hard work and effort. Reality has come home to the United States and no amount of “inspired leadership” will solve this dilemma for the US bourgeoisie. Of course, we can think of another kind of “inspired leadership” that could make a difference, a genuine socialist leadership of the US labour movement capable of mobilising the immense power of the US workers. That is something we are working on!