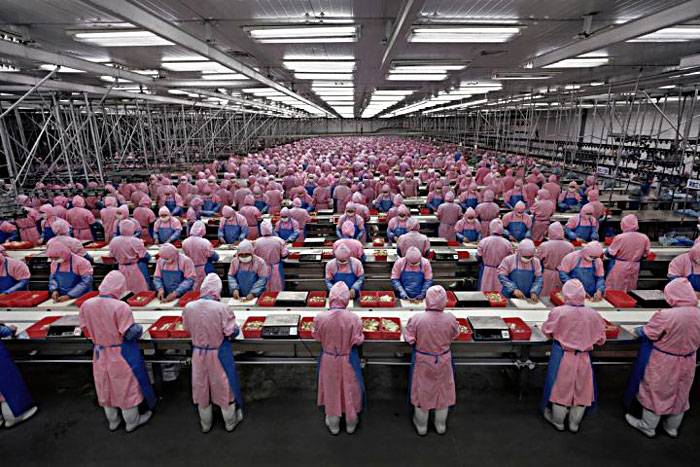 As Adam Booth explains in this article, serious bourgeois economists can see a new world economic slump coming, which they have no way of averting, having already used all the traditional measures they would have adopted in the past, lowering interest rates, credit, etc. In these conditions any important event, such as a Greek default or a dramatic turn of events in the Middle East, can trigger an unravelling of all the pent up contradictions. 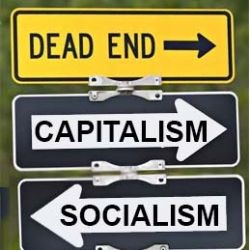 “Watch out”, alarmed the Economist in this week’s main headline. “It is only a matter of time before the next recession strikes. The rich world is not ready.” The front cover picture said it all: the knight in shining armour of the ruling class, looking backwards at the vanquished beast of the financial crisis, fails to notice that he is walking straight into the salivating jaws of an even bigger monster – and this time without any weapons left at his disposal.

“DURING the financial crisis, when the global economy faced its gravest threat since the 1930s, policymakers sprang into action…

“…Should recession strike again, as inevitably it will, rich countries in particular will be ill-equipped to fend it off.

“…analysis yields a clear and troubling conclusion. A few economies could mount a robust defence against a new shock, but most are sitting ducks.” (The Economist, 13th June 2015)

The Telegraph – a reliable mouthpiece for the Tories, the traditional party of the rich in Britain – echoed such warnings only a couple of weeks earlier. “The world authorities have run out of ammunition…They have no margin for error as the economy falters.” (The Telegraph, 24th May 2015)

The bourgeois newspaper goes on to quote Stephen King of HSBC, the giant multinational bank, who compares the global economy to the Titanic – a behemoth of a boat that is drifting towards disaster. Unlike the infamous ship that sank in 1912, “The world economy,” King asserts, “is sailing across the ocean without any lifeboats to use in case of emergency.”

In short, the capitalists and their political and economic representatives, in their attempts to kill of the crisis of 2008, have already used up all the weapons in the arsenal needed to combat a new wave of the crisis, “given that interest rates are already zero across most of the developed world, debts levels are at or near record highs, and there is little scope for fiscal stimulus.”

“The authorities are normally able to replenish their ammunition as recovery gathers steam,” The Telegraph continues. “This time they are faced with a chronic low-growth malaise…The longer this soggy patch drags on, the greater the risk that the six-year old global recovery will sputter out. While expansions do not die of old age, they do become more vulnerable to all kinds of pathologies.”

In the US, still the main engine of the global economy, “Each of the past four recoveries has been weaker than the last one.”

“JP Morgan estimates that the US economy contracted at a rate of 1.1% in the first quarter, far worse than originally supposed…The instant tracking indicator of the Atlanta Fed – GDPnow – shows little sign that America is shaking off its mystery virus…It is becoming harder to argue the relapse is a winter blip or caused by temporary gridlock at California ports.”

The capitalist system, then, in the words of the bourgeoisie press themselves, is terminally sick. Brief glimmers of growth – frequently lauded as signs of a much hoped for recovery – are but the spasms of a dying patient.

The main fear of the ruling class now, therefore, is that capitalism, far from returning to normal after the 2008 crisis, has entered a “new normality”: an epoch of “secular stagnation” and “permanent slump”, in which the growth rates of yesteryear are never to be seen again. Low growth rates, endless austerity, and declining living standards: these are the defining characteristics of the period ahead.

In the past, the capitalists hoped that the world economy would be pulled through by the emerging economies of the “BRICS” and elsewhere, which – whilst the advanced capitalist countries stagnated and stalled – were responsible for what little global growth existed. But now fears are building about China, the previous poster-boy of the capitalist economy, too.

“Much now depends on China, where the economy is starting to look "Japanese"…the Chinese economy is in a much deeper downturn than admitted so far by the authorities. It probably contracted outright in the first quarter.”

“Electricity use has turned negative. Rail freight has been falling at near double-digit rates. What began as a deliberate move by Beijing to choke off a credit bubble has taken on a life of its own, evolving into a primordial balance-sheet purge.”

As with the advanced capitalist countries, therefore, China, in attempting to avert and avoid one crisis, has merely paved the way for an even deeper crisis in the future. The Keynesian methods of government spending and debt-fuelled stimulus have created a credit bubble that can no longer be controlled.

Such is the result of any attempt to resolve the contradictions of capitalism through top-down, bureaucratic methods: investment – still conducted within the confines of capitalism; of private ownership and production for profit – is channelled down dead ends, leading to rising local government debt, asset price bubbles, and an exacerbation of excess capacity – i.e. overproduction – both nationally and internationally.

But, in this highly interconnected world of globalised capitalism, the problem does not end there. “The effects are being felt across Asia,” the Telegraph explains. “Russia, Brazil, Argentina, and Venezuela are all contracting sharply, casualties of the China-driven commodity bust.”

To extend King’s Titanic metaphor, it would seem that, with all the traditional tools of fiscal and monetary policy exhausted, the bourgeoisie is in uncharted waters. The result is an increasing reliance on the untested methods of Quantitative Easing (QE), the impacts of which are unknown to the capitalists themselves who implement them. A frightful hobgoblin of uncertainty stalks the land.

“The great hope - and most likely outcome - is that the recent monetary expansion in the US and the eurozone starts to gain traction later this year…But nobody knows for sure whether the normal monetary mechanisms are working.”

Whilst QE has kept a renewed recession at bay in the USA and UK, it has only done so by exporting the crisis elsewhere, with cheap money leaking abroad and inflating asset bubbles elsewhere. The effect at home, meanwhile, has been to weaken the currencies of those who have enacted QE programmes, helping to boost exports. In essence, it has become yet another new form of “beggar-thy-neighbour” economics. A temporary stabilisation for some has merely served to create further instability for the system as a whole.

At the same time, like a drug-addict whose cravings are increasing unsated by each subsequent hit, the capitalists are finding that each new injection of QE money or debt-fuelled government stimulus has less effect than the last. The law of diminishing returns asserts itself as forcefully within capitalism as within the body of the junkie. In the Telegraph’s own words: “the ‘sugar rush’ from quantitative easing may be wearing off.” Or, as Marx himself put it in the Communist Manifesto, the ruling class can always get out of a crisis, but only “by paving the way for more extensive and more destructive crises, and by diminishing the means whereby crises are prevented.”

The list of options available to the ruling class is rapidly shrinking. But desperate times call for desperate measures. As the engines of the world economy sputter and stall, the previously unthinkable becomes thinkable.

“HSBC's Mr King says the global authorities face awful choices if the world economy hits the reefs in its current condition. The last resort may have to be "helicopter money", a radically different form of QE that injects money directly into the veins of economy by funding government spending.

“It is a Rubicon that no central bank wishes to cross, though the Bank of Japan is already in up to the knees.

“…As Mr King puts it acidly. "Many – including the owner of the Titanic – thought it was unsinkable: its designer, however, was quick to point out that 'She is made of iron, sir, I assure you she can'."”

Despite the occasional bravado and hubris displayed by political representatives of the capitalist class, the more serious bourgeois commentators can see the imminent dangers within the global economy. Indeed, even the normally-arrogant David Cameron demonstrated an uncharacteristic display of foresight late last year, talking about the “red warning lights flashing on the dashboard of the global economy”.

Indeed, such a spark to reignite the flames of crisis could come sooner than expected, with the threat of contagion looming over Europe as the latest developments in Greek saga unfold this month.

As the Economist sought to remind its readers this week:

“Inevitably fragilities remain. Europe is deep in debt and dependent on exports. Japan cannot get inflation to take hold. Wage growth could quickly dent corporate earnings and valuations in America. Emerging economies, which accounted for the bulk of growth in the post-crisis years, have seen better days. The economies of both Brazil and Russia are expected to shrink this year. Poor trade data suggest that Chinese growth may be slowing faster than the government wishes.

“If any of these worries causes a downturn the world will be in a rotten position to do much about it. Rarely have so many large economies been so ill-equipped to manage a recession, whatever its provenance…” (The Economist, 13th June 2015)

However, it is not that the advanced capitalist countries are simply poorly-prepared for the next recession; in reality, they never recovered from the last one. The bourgeois academics, commentators, and political representatives, unable to explain the true cause of the last crisis, have been equally unable to solve the problems facing the world economy. Indeed, how can a doctor be expected to cure a patient, when he/she is not even able to correctly diagnose the disease?

As the Marxists have explained elsewhere, the crisis of 2008 was not merely the product of a financial or banking crisis, but was the expression of an organic crisis of capitalism – a qualitative tipping point in the system following decades of contradictions pilling up upon each other.

In final analysis, despite years of throwing everything but the kitchen sink at the problem, none of these fundamental contradictions in the world economy have been solved by the actions of the capitalists. At root lies the enormous contradiction of overproduction within the global economy, the symptoms of which can be increasingly seen everywhere: from the vast accumulation of idle cash by big businesses across the world, to the extraordinary low levels of capacity utilisation in the advanced capitalist countries, and the eye-watering build-up of public and private debt in all countries.

Without a map or a compass, the ruling class have stumbled empirically from one phase of the crisis to the next, constantly just kicking the can down the road and delaying the inevitable Day of Judgment. Indeed, the current stalemate and stand-off between Greece and the Troika – of the IMF, ECB, and European Commission – is a stark reminder that, despite everything, nothing has been resolved; and, importantly, nothing will, or can, be resolved within the confines of capitalism.

“Socialism or barbarism” – these are the only options facing society. Never has Rosa Luxemborg’s revolutionary aphorism been more apt.