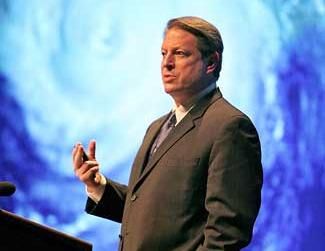 The environmental statistics have been pouring in, and the prognosis for the planet looks dire: global warming is accelerating, leaving environmental destruction in its wake.  Already we are witnessing some of its devastating consequences and there are trends which, if allowed to proceed unchecked, will culminate in humans huddled around the two poles in search of respite from the heat.

The environmental statistics have been pouring in, and the prognosis for the planet looks dire:  global warming is accelerating, leaving environmental destruction in its wake.  Already we are witnessing some of its devastating consequences:  temperatures are rising, bringing more intense heat waves; sea levels are rising, producing more flooding; droughts and severe weather patterns are more frequent; wildlife is disappearing because of loss of habitat.  These are trends which, if allowed to proceed unchecked, will culminate in humans huddled around the two poles in search of respite from the heat.

Here are some of the statistics that tell the story:

A report announced just a few months ago that the north pole ice cap is melting more than 3 times faster than was previously believed.

The greenhouse gas effect is up 20 percent since 1990.

Of course, all these trends could be dramatically reversed if the US government, as head of the world’s biggest contributor to greenhouse gases, resolved to attack them.  It would have to begin with a drastic reduction in the consumption of fossil fuels, such as gas, coal, and natural gas, which are the principal causes of carbon dioxide emissions and therefore global warming.

Since vehicles account for roughly one-third of the carbon dioxide production in this country, the government would immediately need to mandate the conversion of gas-propelled cars to electricity.  And we already have the technology for electric cars, so this program would pose no insurmountable problem.

Power plants account for 40 percent of the production of carbon dioxide.  Here the government would have to launch a Herculean effort to create the technology that would allow us to generate power without detriment to the environment.  But it could mount the same kind of campaign that culminated in the construction of the atomic bomb where the best scientific minds were assembled and assigned the task that many believed was impossible to accomplish.  And in this case the project would have the virtue of benefiting humanity rather than destroying it. In the meantime, the government could expand the research and development of solar energy by providing generous subsidies.

Building structures account for 12 percent of carbon dioxide emissions, but already environmentally-friendly buildings are being constructed.

Air travel produces 15 percent of the total production of carbon dioxide.  For starters, the government could outlaw corporate jets since they transport a mere handful of people at a relatively tremendous cost to the environment. Then, after the U.S. government reversed its own global warming trends, as the richest country in the world it could turn to other countries and help them do the same.

So solutions to global warming are available, but is there a desire to pursue them among the general U.S. population?  A recent poll has provided a definitively positive answer to this question, concluding that a majority of Americans registered serious concern about the state of the environment and indicated they were even prepared to make sacrifices for the sake of its well-being.

With the environmental Damocles sword hanging over our heads, we need to act decisively and promptly.  Let us now turn to the solutions proposed by those the US media hold in high esteem.

First, Stephen Hawking, the world’s best known theoretical physicist, offered this unique suggestion: “It is important for the human race to spread out into space for the survival of the species.  Life on earth is at an ever-increasing risk of being wiped out by a disaster, such as sudden global warming, nuclear war, a genetically engineered virus or other dangers we have not yet thought of.”

Leaving aside Hawking’s underlying assumption that the human species seems to be the only one worth saving, several questions “naturally” emerge:  Given that global warming and nuclear war are human creations, not products of nature such as earthquakes and meteor showers, shouldn’t we analyze the root cause of these threats to life on earth so that they can be eradicated on this planet?  Otherwise wouldn’t we simply carry these afflictions with us when we mi

grated to other parts of the universe?  And these questions lead in turn to another:  How can anyone who is considered so intelligent offer such an uninformed “solution?”

Secondly, George Bush has finally weighed into the debate, after denying for years that global warming is a scientific fact.  Unfortunately he is moving in slow motion, as reported in The New York Times (June 1, 2007): “President Bush, fending off international accusations that he was ignoring climate change, proposed for the first time on Thursday to set a ‘long-term global goal’ for cutting greenhouse gas emissions, and he called on other industrialized nations to join the United States in negotiations aimed at reaching an agreement by the end of next year.”

In other words, nothing needs to be done in the present, and when we finally get around to tackling the problem, we will move very slowly.

Finally, let us turn to Al Gore, a politician who has positioned himself as the supreme champion of the environment, thanks to his informative and popular documentary, “An Inconvenient Truth.” In a recent New York Times (July 1, 2007) op-ed article he made an impassioned plea:

“We – the human species – have arrived at a moment of decision.  It is unprecedented and even laughable for us to imagine that we could actually make a conscious choice as a species, but that is nevertheless the challenge that is before us.

“Our home – Earth – is in danger.  What is at risk of being destroyed is not the planet itself, but the conditions that have made it hospitable for human beings.”

Gore went on to argue that decisive action must be taken immediately for otherwise the forces set in motion by global warming will be irreversible.

Gore’s approach, unlike Hawking’s, has the virtue of recognizing and emphasizing the fact that humans have the power to reverse global warming if they so resolve.  And unlike Bush, Gore acknowledges that time is of the essence.  But might not his call for the human species to engage in a collective decision-making process within the confines of capitalist society be self-delusional or deceitful?

Under normal operating conditions, capitalist society never includes the vast majority of the population in the decision-making process concerning public policy.  There was no public debate followed by a referendum over whether the US should instigate an entirely unprovoked war against Iraq.  The vast majority of us have absolutely no say in whether nuclear power plants should be constructed or what kinds of cars Ford and GM should produce.  These decisions are made behind closed doors by corporate America with the intent of promoting their own special interests, in particular, raising their profits.  They are not concerned with the well-being of the general population, but in order to thrive, they must pretend they are operating in everyone’s interests.

For example, when Ford discovered that the Explorer easily overturned, management got out their calculators and concluded it would be cheaper to keep the same faulty design while paying out settlement fees in court to the victims and their families of this deadly vehicle.  Of course, they informed no one of the dangers at the time.  Honesty would not have been in their interest.

Capitalism divides the members of society into two very different classes of people:  workers and capitalists.   Those who work for a living work long hours, if we are lucky we can buy a house, and after purchasing a car or two, there is little left over.  The capitalists, the owners of businesses and industry, on the other hand have millions, if not billions, of dollars, thanks to the work we do for them, and they use much of this money to influence governmental policy in their favor.  Moreover, since within capitalist society money speaks with the loudest voice, they are very successful in this endeavor.  Here are some examples:

Coal-burning utilities are giving money to one of “the few remaining climate scientists” who is critical of claims of global warming. (The New York Times, July 28, 2006)

The federal agency responsible for protecting Arctic polar bears has barred two scientists from speaking about their plight due to global warming.  The bears face extinction due to loss of habitat. (The San Francisco Chronicle, March 9, 2007)

“The Bush administration is drastically cutting back efforts to measure global warming from space....” (The San Francisco Chronicle, June 5, 2007)

“When Americans elected a Democratic Congress last November, they were voting to end politics as usual and special interest legislation.  On the vital issues of energy independence and global warming they are not only in danger of getting more of the same but also…winding up in worse shape than they were under the Republicans.”

Because political decisions in capitalist society are driven by money and deceit, Gore’s call for a collective decision on the part of humanity is indeed, as he suggested, “laughable.”  One can only wonder why he did not notice this fact when in office.

We in the Workers International League are convinced that only a socialist movement, led by working people, is capable of meeting the challenge of environmental destruction.  Only when the economy is collectively owned and democratically operated will the possibility of a collective decision-making process become a reality.  With all the relevant information at our disposal, all members of society will be able to discuss and debate which way forward and then determine policy by voting.  Socialism means that the majority will rule in the interests of the majority, and a healthy, vibrant environment is in everyone’s interests.